Atlantis: Touched by the Gods, Part One 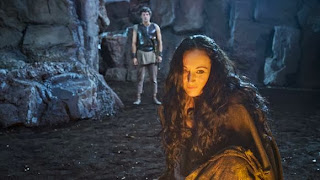 The main job of Part One of Atlantis' two-part finale is to start tying up some loose ends and set up Part Two, which promises to at least discuss the issues of Jason's parents and magic death-avoiding skills, though whether it answers them remains to be seen. Major spoilers follow.

This episode is primarily concerned with advancing Atlantis' own plot, so the amount of material taken from Greek myths is minimal. Aside from bringing back the character of Circe, the main mythical element here is probably the general theme of princesses who betray their families to help handsome strangers, as indeed the mythical Ariadne did. 'Betrayal' is perhaps not the best word in this particular case as this Ariadne is working against her wicked step-mother, rather than her innocent father - she's certainly not going to the extremes of Jason's mythical love interest, Medea (I know, I'm obsessed with Medea. She's awesome though). Anyway, the point is, the idea that the handsome young hero is helped by the princess who's fallen madly in love with him is certainly Greek, even if it plays out a bit differently here.

Meanwhile, Pasiphae is still doing her best Roman matriarch thing, apparently killing Minos with drinks of some kind (I’d have gone for figs). She’s also randomly threatening guards, just to remind us that’s she’s evil. It's not entirely clear what her end-game is at this point, as Ariadne still refuses to marry Heptarion, but perhaps she's confident she'll be able to force Ariadne to do so once Minos is dead.

Never mind the actual ancient stuff though - my favourite part of this episode by far was the lovely tribute to the Harryhausen/Chaffey Jason and the Argonauts, as, following Circe's (apparent - she is a witch after all) death, three skeletons rise from the ground to attack our heroes. The special effects looked good to me, and the whole idea was just really nice, and put a big smile on my face. It may have little connection to ancient mythology (even less here than in the Harryhausen version) but films like Jason and the Argonauts are part of how we in the modern world experience myth, and the concepts and elements they introduce become part of the myth for succeeding generations. That's what myth is, after all, a story that is constantly in flux, constantly being re-imagined by new generations in new ways (though a lot of Euripides' ideas seem to have stuck, over the years!). Anyway, it was a really nice shout-out to the film and to other iterations of Jason's story.

The rest of the episode, while there was nothing particularly wrong with it, didn't work quite so well for me, mainly because I was having trouble sympathising with any of the protagonists. We open, for example, with our three heroes sitting around having a chat about how they're going to cold-bloodedly murder someone. (I thought Hercules' latrine idea was pretty good, I don't why the others were so dismissive of it).

Now, as the script points out, Pasiphae is not very nice, and the boys feel they have no choice, because they'll all die if she doesn't. The audience can see that Pasiphae is clearly a murderer, as she’s in the process of murdering Minos at the time. But the trouble is, the guys don’t know that, and anyway, whether or not that justifies killing her while she sleeps is debateable. And no matter how much they angst about it, there's something slightly uncomfortable about watching them plan her murder, and it's hard to root for them as they break into the palace to do so. Then the comedy music kicks in for some of Hercules and Pythagoras' misadventures and the whole things gets even worse. When Jason changes his mind and runs away and Pasiphae has all the guards out because there was an assassin in her room, what she's saying is completely true, the whole thing would be terrifying from her perspective, and my sympathies are almost with Pasiphae in these scenes.

Ariadne's dislike of Pasiphae is more immediately sympathetic, as she's much more aware of how nasty Pasiphae is (she doesn't seem to have worked out Pasiphae is poisoning Minos, but she does know she had Korinna murdered). She loses my sympathy, however, towards the end, because once again she is just utterly stupid, to the point where I don't really care what happens to her. First, she lets Jason out of a door only the royal family have keys to and doesn't notice the massive bloodstain they've left there. Then when her maid finds blood all over her bedsheets, she tells her it wasn't hers and actually tells her it was the intruder, because she completely trusts this woman. Not only does she have no reason to do so, this is the replacement for the maid Pasiphae murdered, so surely it stands to reason that this woman is probably spying for Pasiphae. There must be other stories she could think of - she could have been sacrificing a goat or something. And then she confesses that she wants Pasiphae dead to the whole court, but cries and begs for mercy when she's condemned to death for treason. A crime of which she is completely guilty. I kept thinking of Sansa Stark from Game of Thrones during Ariadne's scenes, and of how much more intelligent Sansa is compared to Ariadne. This does not speak volumes for Ariadne.

Of course, if Ariadne wasn't in a family show - and had two brain cells to rub together - there's an obvious explanation a woman can give her maid if there's blood all over her bed that wouldn't raise any suspicion at all. And this is another issue with this episode, as alongside the really dark material concerning whether or not our heroes should commit murder is a whole lot of dancing around the issue of whether or not Jason and Ariadne had sex while they snuggled in her bed all night. Apparently, you can plot someone’s cold-blooded murder in a family show, but heaven forbid there should be any clarity on the subject of sex (though Hercules clearly implies they did it and Jason doesn't contradict him). 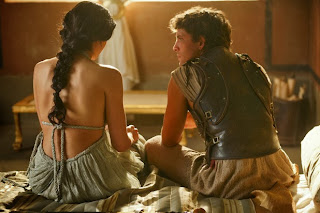 It's not impossible to do a show suitable for the whole family that deals with serious plots while being a bit coy about sex so the kids can watch - Star Trek: The Next Generation, for example, included reasonably harrowing depictions of the effect of prolonged torture on a person while making only limited references to sex. But romantic plots in Star Trek were only ever peripheral, so it didn't matter if younger viewers didn't catch everything. The romance is so central to Atlantis' plot that something about the whole thing just feels slightly weird and disjointed, like it can't quite work out who it's actually aimed at.

Of course, all of this is just Part One of two, so it may all come together next week. In fact, it does a pretty good job of feeling like a distinct episode in its own right, much more so than many Part Ones. I loved the skeletons scene and Jason and Ariadne's romance is finally starting to take off a bit as well (their bedroom scene was unoriginal, but nicely done). It's just plagued with some of the same issues the show has been having throughout its first season, an unevenness of tone and a difficulty blending comedy with drama. Let's hope it all comes together a bit in the finale.

Hercules: I’ll have you know, I once tossed a rabid bull off a cliff.
Pythagoras: How is that even remotely relevant?

Ariadne: I’d be free to meet a simple boy of my own choosing.
Jason (confused): Are you calling me simple?

Pythagoras (to Hercules): Fleeing the city and growing beards is your answer to everything.