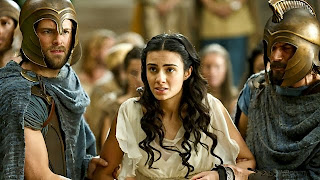 Atlantis’ first season finale, in the grand tradition of first season finales, answers some questions while raising rather more of them. Overall it’s an intriguing episode, interesting enough in itself but more importantly, setting up some plot arcs with potential for season two. Spoilers follow.

As the episode opens, Ariadne is about to be executed by a particularly gruesome method; roasted alive in a huge bronze bull. According to ancient legend, this particular method was preferred by a 6th century BC tyrant (in both the ancient and modern senses of the word) of a Greek colony in Sicily. Phalaris, tyrant of Acragas, had a reputation as a legendarily cruel leader and having his enemies roasted alive in a bull, with their shrieks sounding like the bull bellowing, was one of his most famous nasty habits. How true any of the stories attached to Phalaris are is hard to say, but this was certainly a well known and widely reported one, starting with poet Pindar’s Pythian Ode 1 (‘Phalaris, with his pitiless mind, who burned his victims in a bronze bull, is surrounded on all sides by a hateful reputation’) and mentioned by numerous poets and historians throughout antiquity. In the Roman period, a bronze bull found in Carthage was thought to be Phalaris’ bull and was a popular tourist attraction.

Hercules finally gets his chance to be heroic here, preventing Jason from wandering off to die with Ariadne and helping him to rescue her instead, with motivational speeches mainly. He even gets to use his strength later in the story, which is rather nice. Unfortunately he then spoils it all by peeking at Jason’s girlfriend while she’s undressing, demonstrating that he still hasn’t learned how to behave in a respectful manner towards women. Pythagoras, poor thing, comes off even worse; his enthusiasm for the mechanical genius behind the bull is funny but it’s a bit morbid and it's all he really does, besides also trying to peep at Ariadne. Still, both of them are better off than Medusa, who’s mentioned to remind us that she’s still around and we’ll deal with her in season two, but doesn’t actually appear. To be fair, there wouldn’t be room for her in this story.

The heart of this story is the question of Jason’s parentage, and the most interesting and effective scene is the one between his mother and father as they stand over him. (It is, perhaps, unfortunate that the hero spends by far the most gripping scene in this two-parter unconscious, but never mind). Last week’s trailer spoiled the appearance of Jason’s father, though the Oracle’s advice that Jason should go ‘walk among the dead’ would have been a pretty big clue. ‘Walking among the dead’ turns out to be code for a leper colony, so Aeson is alive, if not well. (It also seems clear that they're all natives of wherever and whenever Atlantis is set, but Aeson took Jason to the modern world for his protection. Jason is surprisingly unfazed by much of this (and apparently the very dangerous and contagious disease of leprosy holds no fear for him), perhaps because he’s too excited to meet Batiatus.

His mother is more of a surprise, though one that a fan of The Tenth Kingdom like myself should have seen coming. Pasiphae, it turns out, had a relationship with Aeson before somehow giving him leprosy, and both Pasiphae and Jason are ‘touched by the gods’ (are they descended from gods? Do the gods exist in Atlantis? These things remain unclear). Pasiphae had already gained an extra dimension when she actually expressed some regret for Ariadne’s death earlier on, while her determination to finish Jason off herself is reasonably impressive (as is her breastplate, which is quite something). Evidently she still has enough human feeling in her to refrain from killing her own son, though since Jason is apparently fated to ‘destroy’ her she may yet change her mind. Sarah Parish and John Hannah are great here, creating a complex relationship within a few lines of dialogue that left me wanting to see much more of them. 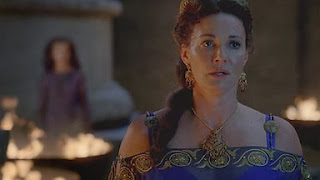 The whole thing gets wrapped up rather abruptly at the end, as the Oracle’s assistant discovers (finally) that Minos is being poisoned by the evil maid hired by Pasiphae and (somewhat implausibly) cures him almost immediately. Minos, restored to health, revokes the sentence passed on Ariadne and pays Jason off with a warning that since she’s royal, they can never be together (whether he would feel more or less inclined to let them be together if he knew Jason was actually her step-brother is impossible to say). More intriguing seeds are sown for season two, as we’re reminded that the Oracle has ‘always said’ that Minos has no right to the throne, but considers him a lesser evil than Pasiphae.

This was a satisfying finale – there are lots of loose threads hanging, but since it’s only the end of season one I think we can consider them a series of mini-cliff-hangers for season two rather than a lack of resolution. And there is enough resolution here to keep us happy for now, with Heptarion finally dealt with and the mystery of Jason’s parentage solved, even if it’s still unclear why he and his mother are both ‘touched by the gods.’ If next year the series can just cut back a bit on the awful ‘comedy’ music and give us a few more three dimensional female characters who have more to do than look pretty and inexplicably fall in love with
our heroes, it could become something really good.

Hercules: We will stop this or we will die trying!

Ariadne: I have been a fool. Yes. Yes you have.

Hercules: That’s the problem with these oracles, they only ever tell you half the story.