This film was ridiculous. I kinda loved it.

Spoilers follow and they are major spoilers - I will be discussing the end of the film. So look away now if you want to go in fresh! I will just leave you with the knowledge that Brother and I chortled happily throughout the entire film, which may not have been the reaction the makers were going for, but we had a good time.

There's no way I'm going to have remembered all the little bits and pieces that were totally bonkers about this film, but I'll do my best to cover the main issues. The easiest way to approach it is probably to provide a brief summary and discuss it as we go along.

The film opens, over ominous-looking ash and 'bodies', with a quote from Pliny the Younger's letters describing the eruption as he saw it from Misenum and as those with his uncle Pliny the Elder, who was killed in the eruption, saw it from Stabiae. (So far, so good, even if the lecturer in me wants to mark them down for the incomplete reference).

After that we go back in time to a 'Celtic Horsemen' revolt in 'Northern Britannia' in AD 62, during which all of Young Jon Snow's family are killed by Evil Kiefer Sutherland, because Evil Kiefer Sutherland does not understand that you're supposed to sell defeated women and children for profit, not butcher them. This is not a revolt I am familiar with, possibly because 'Celtic Horsemen' describes most of Britain and 'Northern Britannia' could mean anything (presumably they meant Northern England). It's very strange, because there was a perfectly good historical revolt in AD 60-61 they could have used, as I'm sure Jon Snow could plausibly look a year or two older. It was led by Boudicca, queen of the Iceni - you may have heard of it. The only reason I can think of for not using it is that they need Jon Snow to be a horse whisperer later and they want to imply he gets it from some special tribal skill. And possibly because coming from 'Northern Britannia' sounds more rebellious than being from East Anglia - though since Kit Harrington later uses his own southern accent instead of his perfectly good Sean Bean impression from Game of Thrones, they don't seem to be pushing that angle.

Young Jon Snow survives and is picked up by slave traders and we next see him all grown up fighting in a small arena in Londinium, 'capital of Britannia' (no, it wasn't). It is chucking it down with rain and the Roman lanista in charge is complaining being in 'this hellhole', because it always rains in Roman Britain and everyone hates it. They call Jon Snow 'The Celt' because the makers have seen Gladiator, despite the fact it makes no sense since everyone in Britain who is not a Roman is a Celt. The lanista likes what he sees and carts him off to Pompeii.

There are lots of fancy CGI shots of Pompeii with Mount Vesuvius looming threateningly over it, and one gratuitous look into the volcano in which lava is jumping about in the crater. Which is nice, except that Vesuvius didn't have a crater before the eruption of AD 79. There are paintings of it in some of the buildings in Pompeii, and it's pointy. Because it hasn't erupted yet. 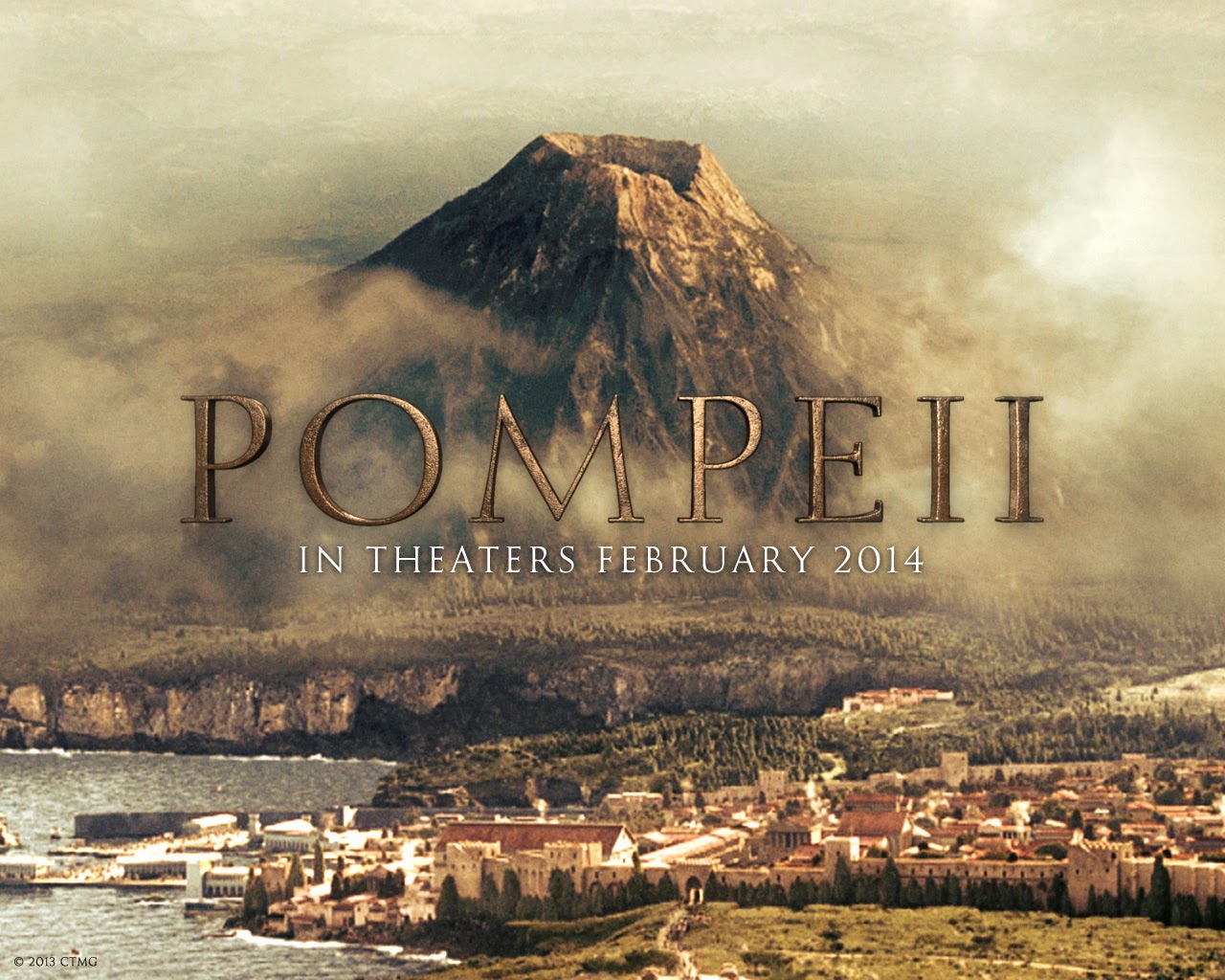 Vesuvius in the film 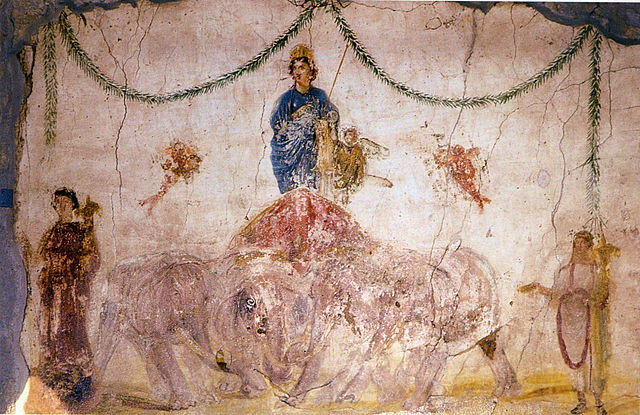 Painting from the Temple of Venus Pompeiana near the Marina Gate, Pompeii

The makers have also seen Spartacus (all of it) as once in Pompeii, Jon Snow slowly strikes up a friendship with a fellow gladiator despite the prospect of them imminently having to kill each other and then they're all pimped out to rich Roman women (except this film is a 12A so we don't actually see any of that). Jon Snow impresses the daughter of the house with his horse-whispering skills, which pisses off Evil Kiefer Sutherland because Evil Kiefer Sutherland wants to marry her. Cassia, the young lady in question, seems to be under the impression that she is not a Roman, but a 'citizen of Pompeii'. Since Pompeii became a Roman colonia in 90 BC I'm not sure what she's on about there. Her father is trying to get Imperial support to re-build Pompeii after the earlier earthquake, but it's a good thing he'll never get the chance as he can't tell the difference between an arena (circular, gladiators fight in it) and a circus (long oval, more oblong really, chariot races happen in it).

Evil Kiefer Sutherland is a bizarre character. He's a senator, but he stays in a military encampment and seems to be a military commander of some kind (the two aren't mutually exclusive, but it's weird for this place and this period, and unexplained). He wears purple, which is supposed to be an Imperial colour, and most bizarrely of all he doesn't seem to realise that there is a new Emperor, a plot point that goes nowhere. His accent is a thing of beauty - the most ridiculously over the top cod-posh-British evil English accent I've heard in a long time (most of the other fake English accents are just as bad, but not as funny).

Anyway, it all builds up to another scene nicked from Gladiator, in which (Roman) Jon Snow proves himself to be one of the unluckiest characters in fiction, as he is forced to re-enact the massacre of his own village in the arena. Meanwhile Evil Kiefer Sutherland threatens to have Cassia's family killed for insulting the Emperor, because he's apparently got Titus mixed up with his younger brother Domitian (Titus held no treason trials and didn't execute any senators during his reign, which is why he's well thought of). Jon Snow and his buddy Atticus win the fight they're supposed to lose, of course, but just as the various tensions between him and Evil Kiefer Sutherland and Cassia and so on are about to erupt, the mountain does instead.

The rest of the film follows a pretty predictable series of set-pieces as everyone races towards their impending doom. Brother thought it ought to have been called A Storm of Cliches. To be fair, though, the film doesn't shy away from the fact that everyone in Pompeii when the big ash cloud hits is going to die. I was fully expecting Jon Snow and Cassia to be able to out-run pyroclastic flow, but they don't - though they do imply that their horse does, which doesn't seem likely either.

The film ends on them kissing as the ash cloud descends, which is all very dramatic and romantic, though I did have a couple of problems with it. One is the usual complaint that the 'bodies' from Pompeii aren't bodies, they're plaster casts - so unless there was a two-person-shaped hole in the later hardened ash and a Victorian archaeologist poured plaster into it, no such thing should exist (see Caroline Lawrence's excellent summary of some more accuracy issues here). Secondly, and perhaps more problematically, the fact that they're still kissing as they die and are preserved that way inevitably recalls Up Pompeii! and young Erotica frozen in the act of sex forever. At least it meant I ended the movie as amused as I had started it. 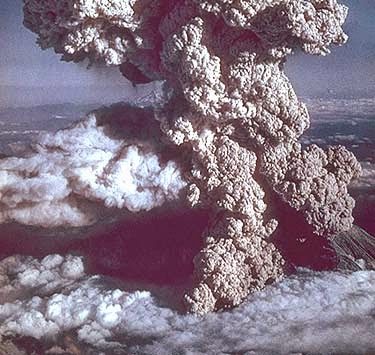 This is what a real pyroclastic flow looks like 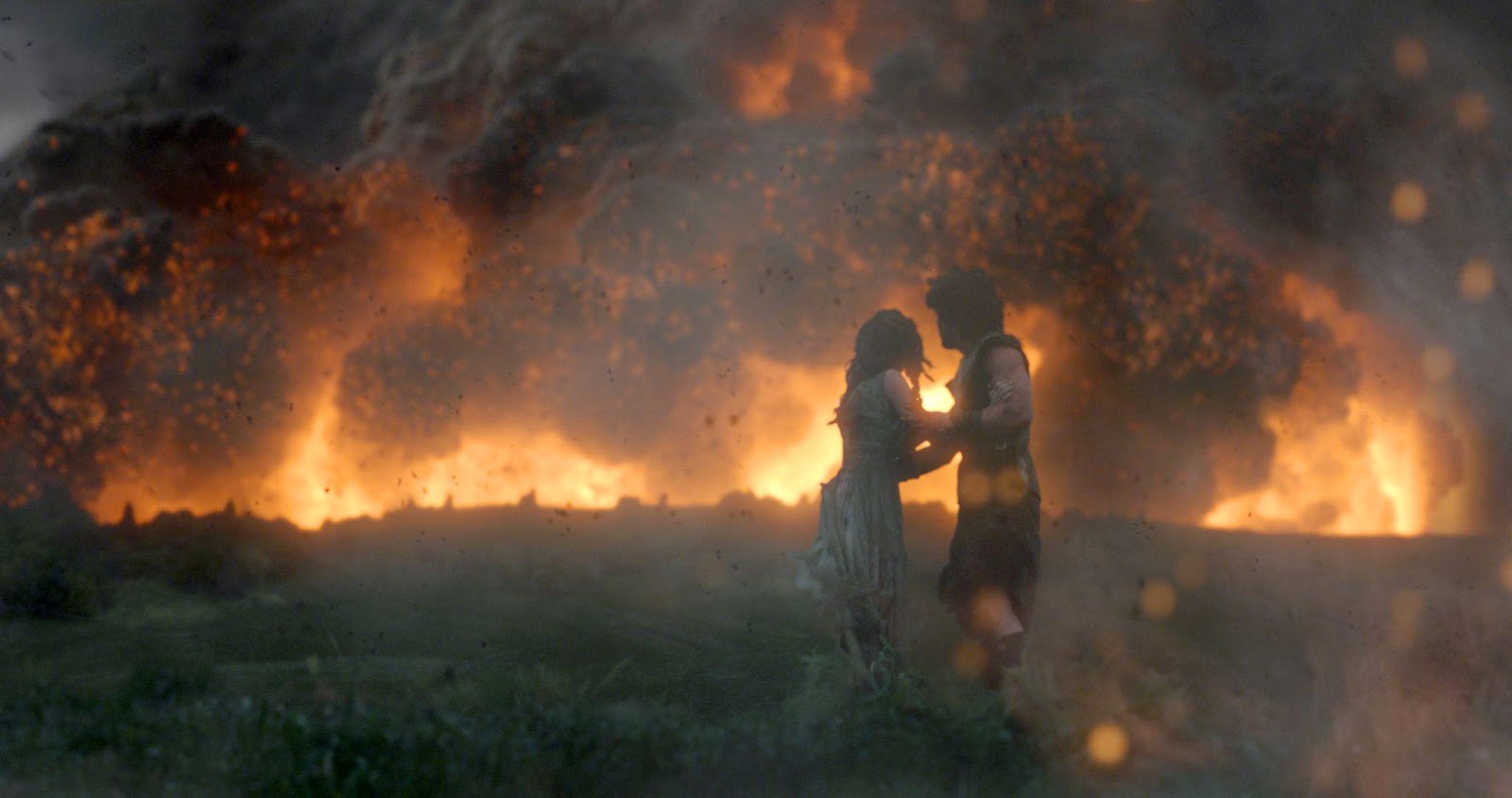 And this is Pompeii's version. To be fair they do incorporate elements of Pliny's description, but that's probably more flame-y than it should be.

To give the film-makers their due, ending by killing everybody is a brave move (though it does make the film feel a bit pointless - but then, I sometimes feel that way about Das Boot, and that's a masterpiece). And I have to say I thoroughly enjoyed the film. It's totally daft in every way but Milo (that's Jon Snow's actual name in this film) and Atticus are likeable heroes and very easy to watch for an hour or two. Cassia's not bad either, and I liked the fact that it was her who more or less finished Evil Kiefer Sutherland off, by handcuffing him to something (with a pyroclastic flow coming at him). It's fun to Jared Harris (Moriarty/the evil guy from Fringe) and Trinity from The Matrix as Cassia's parents as well. All in all, watching this again to do research for my co-authored book on films about Roman Britain will not be too odious a chore.