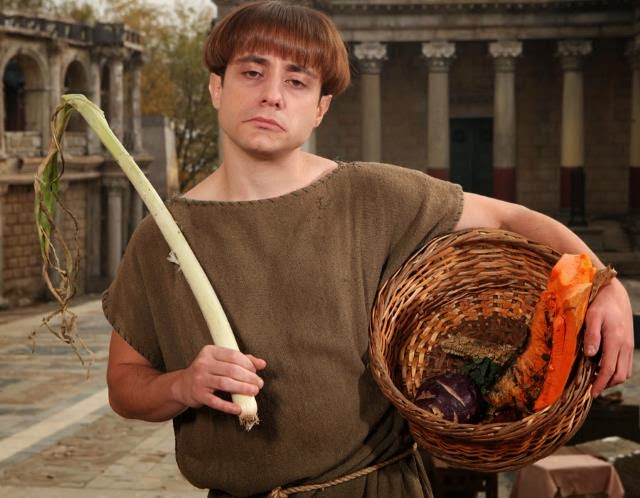 I feel like I should be making some kind of Three Men and a Baby reference, but this episode is really Two Men and a Baby - Marcus wants nothing to do with any of it.

This is an episode based on a genuine ancient phenomenon, which always makes me happy (that the episode is based on something ancient that is, not the phenomenon itself, which is pretty horrible). In the ancient world, if people couldn't afford to raise a baby, they would expose it - we have a particularly brutal letter from a man in Roman Egypt to his pregnant wife telling her to raise the baby if it's a boy, but expose it if it's a girl.

One place you could expose the baby if you wanted to give it a fighting chance was the dump. People have to go to the dump to get rid of their rubbish, so there's a high chance of the baby being seen, and someone might take it in - either to raise as their own or, more likely, as a handy free slave (granted you have to put in a few years employing a wet nurse to feed it first, but at least none of your female slaves has to be pregnant for nine months, which affects their productivity). It's established here that this is how Marcus' parents acquired Grumio - on a hill, in his case - and this is how Grumio acquires Binny (technically for the ever-indulgent Marcus, unless Stylax claims her - Grumio can neither own property, including slaves, nor can he claim parental rights over any child, even if it was biologically his).

Obviously other aspects of the episode were less accurate - I'm sure I don't have to tell you that the Romans did not have paternity leave. They also didn't have orphanages - exposed babies were either picked up to be used as slaves or they died. I did like the child running around playing with a mace at the shelter though, which amused me. Perhaps it's a good thing I'm not a parent.

I loved the B plot in this episode, in which Shredder and Water-Man are replaced by a furnace and a table, thanks to the endless march of technology. I particularly enjoyed Water-Man's final triumphant "Water-Man!" as he proved that there are some things a person can do that a table can't (and nor could a water-cooler, for that matter). I was a bit confused at first when we saw the fans leaving because for a moment I thought they were chimney sweeps (which would be right out, since the Romans didn't have chimneys) - I didn't recognise the fans when they were held upright that way! Also it's late and it's been a long day...

The C plot about Cynthia's play was rather thin, but I did like her War Horse-inspired Trojan Horse costume.

Another enjoyable episode and actually almost touching in places. I rather hope we see Binny again, though since working with babies is famously difficult, it seems unlikely. I'm also still hoping Metella gets a bit more to do soon - I was almost hoping she and Cynthia would end up with Binny, just to give them a meatier storyline and something to do...