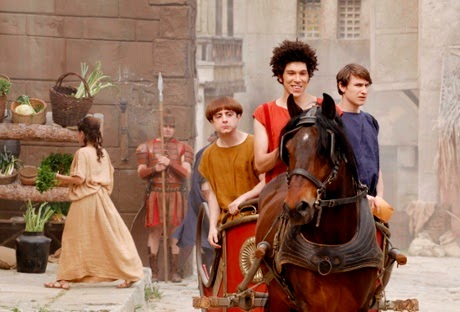 Plebs is back! And it knows how to get me on side right away by opening with a chariot race, though the fact it appeared to be taking place in an amphitheatre rather than a circus was a bit distracting.

As long-time readers know, I'm an F1 fanatic and a big fan of the idea that ancient chariot races were just like an ancient form of F1 (or NASCAR, since they took place around an oval track). So I was a big fan of the opening scene. The rest of the chariot = car/motorbike analogy was iffier on accuracy (traffic wasn't allowed to move through the streets of Rome during the day, because of the congestion) but I did like all the references to Stylax wearing 'leathers'. It did get me wondering whether anyone drove chariots around the streets - I was under the impression that the actual traffic in Rome consisted of carts, partly because of the massive cobbles that chariots would bounce around all over, but I hadn't really given it much thought, and even it that were the case, the idea of young people riding around in chariots all the time for fun is actually quite appealing and fits Plebs rather well.

The rest of this episode was a fairly predictable story about Marcus going out with the prostitute next door, but I did like the scene where the boys try to steal wishing pennies from the fountain. It seemed like a bright enough idea, and them splashing each other was fun, as well as a nice homage to the Friends opening sequence (the Friends pilot coincidentally having aired exactly twenty years before this episode did, which doesn't half make me feel old).

A fairly gentle episode to ease us back in (graphic sex scene notwithstanding) but it's great to have Plebs back. I didn't realise how much I'd missed it until I heard it's bizarre but strangely catchy and endearing reggae-type opening theme tune. Just try not to think about the fact it's Hizdahr zo Loraq running around ineffectually threatening cheating husbands.