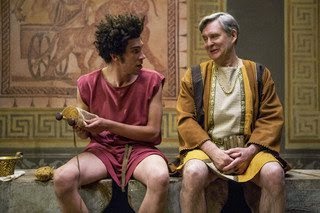 (I'm a bit behind on the Plebs reviews but I'm catching up!)

How's this for a comedy pitch: in a society with a particularly high slave population and no free healthcare, a man refuses to pay for the treatment his slave needs, leaving the slave to die to save some money. That's some pretty black comedy right there, probably the blackest Plebs has done since Marcus more or less killed a man in series one's 'The Gladiator'. It basically works, but I must say I came out of this episode finally convinced of something I'd been thinking for a while, which is that Stylax is much, much nicer than Marcus. Stylax is a bit daft, but here he pays for his friend's slave's medicine out of his own pocket and grovels all over the place to both Flavia and Gaius in an attempt to get enough money to pay for Marcus' as well. Marcus, meanwhile, refuses to pay for medicine for his own slave and expects his friend to prostitute himself to get some when he needs it. Cynthia deserves better. Much better.

There's a tendency for modern writers sometimes to assume that people in the ancient world were faced with a choice when ill, of whether to pray to the gods and carry out religious or superstitious rituals, or rely on physicians and medicine. I have to admit, normally, this rather annoys me - I suspect the vast majority of people would simply do both, just as most religious people today tend to pray for health and recovery while also seeing doctors and getting scientific medical treatment. However, there were probably some people who tended to rely more on one or the other, so Cynthia's preference for religious ritual seems perfectly reasonable, and of course Marcus has other motivations.

The religious option wouldn't normally be cheaper - sleeping in an incubation sanctuary and praying for a healing dream, for example, required one to buy an animal to sacrifice before sleeping on its fleece, pay the priests and leave a substantial gift for the temple if it worked (the priests made sure to put up inscriptions noting that, for example, when one man was cured of blindness at Epidauros but didn't bring the thank offerings to the god Asclepius, the god made him blind again until he came back, presumably bringing the thank offerings this time). Cynthia's chosen ritual to the goddess Hygeia (daughter of Asclepius) sounds surprisingly cheap and short on animal sacrifice, however - and of course, Marcus' primary interest is in trying to get Cynthia to go out with him, which somewhat surprisingly nearly works.

The episode's other main plot is fairly black comedy as well, involving potential sexual harassment and a character trying to decide whether they should sell themselves to further their career. Between this and Bad Education, I'll never be able to look at Hugo from The Vicar of Dibley (or Tom from Four Weddings and a Funeral) the same way again. It was very funny though, and firmly based in real ancient Roman society, in which wealthy men acted as patrons for smaller businesses and clients.

Black though the comedy may have been, this episode was also very funny, and the make-up on the sick characters was impressive. I also loved the opening scene, set in a Roman toilet - which really were exactly like that (though surely no one would share sponge sticks - that's even worse than using someone's toothbrush...). I couldn't help thinking of The Roman Mystery Scrolls, the only other series I'm familiar with to set so much action in an accurately-depicted toilet, and author Caroline Lawrence's favourite prop, the sponge stick. The only other time I remember seeing a Roman toilet accurately depicted in a drama was a brief scene in Spartacus: Gods of the Arena, but there are other... distractions that may prevent viewers from paying much attention to the toilets in Spartacus. It's amazing the comic potential of the Romans' fondness for communal pooing hasn't been exploited more often.

What I loved about this episode was that everything in it came straight out of the ancient world. I can think of hardly anything that was contemporary in it - Landlord's life insurance scam was more modern (no life insurance in ancient Rome), but even that relied on Grumio not understanding the concept. (I'm also not sure why some of Flavia's costumes have looked sort of kimono-y lately, but I like it, it's a good look on her). Some things, like Marcus trying to get Cynthia to go out with him, are timeless, and when Gaius sat far too close to Stylax in the toilet I was reminded of people who sit unnecessarily close to someone else on the bus or in church, but most of this story could only have taken place in ancient Rome. Plus it was very funny. If only Metella could be given something to do other than being the only sane person on the block, but I suppose we can't have everything, and that shouldn't take away from how enjoyable this half hour was.