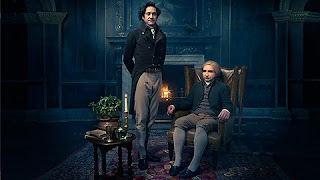 I read Susanna Clarke's novel Jonathan Strange & Mr Norrell years ago - I can't remember it very well at all, but I do remember that I loved it! I especially loved the Jane Austen-style prose (right down to the spellings) and all the academic-history-style footnotes, which were brilliant. This isn't the only novel to use footnotes of course - all the Discworld novels have them - but the way these were constructed, as fake academic references, was particularly fun.

The BBC's seven-part TV adaptation of the novel just finished, and it was very good - it'll sit happily on my shelf next to Gormenghast and The Chronicles of Narnia (it shares one of the stars, Samuel West - a very nice actor who once took me and my friends out for a beer, and who played King Caspian in the BBC's Voyage of the Dawn Treader). I especially liked Lady Pole's description of the Gentleman's hair as looking like 'thistle-down' towards the end, reflecting his constant epithet in the book. I also loved how the Raven King looked just like Christopher Lee from The Wicker Man - not coincidentally, a reference to idea of survivals of Druidic, ancient magical rites in the UK.

Most of the magic in the story comes from Nothern European folklore, particularly relating to Faerie, to changelings and other worlds and 'Christians' kidnapped from their homes. I'm not much of an expert on folklore that dates later than AD 400, but I suspect the repeated references to 'English' magic at least partially reflect the folklore it's based on, as well early nineteenth century English imperialism. I think it's a mixture of Celtic (particularly Welsh, Scottish, Cornish and Irish, and maybe Breton) myth and folklore, and possibly some Anglo-Saxon and more broadly French elements that might go into the mix to create particularly 'English' magic. There's also an emphasis on the North of England as the home of magic, possibly suggesting a stronger Celtic and possibly Viking influence, and less French. (Did anyone else get distracted by mental images of Robb Stark every time they said 'King in the North'? And don't get me started on trying to kill off Thoros of Myr...!)

There are a few Classical elements included though. Vinculus has a Latinate name, which makes me wonder if there's an implication that 'English' magic goes back further than Normans or Vikings or Anglo-Saxons or even the Romano-British Celts left behind when the Romans left - although the Latin name suggests Romans, the fact that the story is set in Britain perhaps implies a Druidic influence there (not that Vinculus is necessarily intended to be an ancient Roman or Druid - though it wouldn't surprise me if he was - but the magic inscribed on his body is perhaps Romano-British or Druidic in its ultimate origin, the magic the Raven King originally drew on).

The Gentleman also knows his Classics, as he shows in the spell he puts on Stephen Black and Lady Pole to stop them from telling anyone about him. The nonsense they speak is a rather nice and thematic re-telling of fairytales from the fairies' point of view, as Honeyfoot and Segundus eventually realise, though somehow no one seems to realise they are all about fairy abductions, and do in fact explain what Lady Pole and Stephen are trying to say, in a roundabout way. But what Segundus sees when he looks at them is a twist on a Classical motif - a rose on their mouths. In Rome, 'sub rosa' meant in secret (which is why Steven Saylor's series of novels about Gordianus the Finder are subtitled Roma Sub Rosa), and this use persisted into English, either remembered or rediscovered during the Renaissance. So a rose over someone's mouth means they are keeping a secret of some kind, or being forced to do so. The Gentleman may simply have known the English use of the term, but it certainly has a Classical origin.

One of Jonathan Strange's spells also has its roots in Classical literature. During the Napoleonic War, in Portugal, Strange reanimates the corpses of some dead soldiers in order to get some information. This use of necromancy for information-gathering is highly Classical, and in particular is reminscent of the gory scene in Lucan's Civil War in which the witch Erictho raises the corpse of a dead soldier to obtain a prophecy (supposedly about the future of Sextus Pompey, though the dead soldier is more interested in prophesying and talking about the underworld in general). As in the series, the corpse is decaying and disgusting, but the dead have knowledge the living do not. 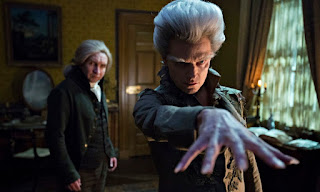 These are just hints and echoes of the Classical world in a story much more concerned with the
history of England since the Norman conquest. It is possible that Clarke and the TV crew were not concerned with using or referring to the Classical world at all. However, the fact that these echoes of the ancient world bleed through, surviving years of history to remain influential, is testament to the enduring impact of the ancient world on the modern, even when we can't see it directly.

Edited to add: As my colleague Louisa Mellor at Den of Geek points out, there's also a definite Orpheus and Eurydice vibe to Jonathan and Arabella's story.