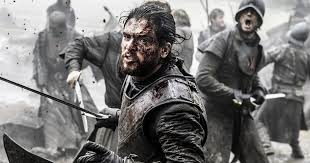 I'm at the Historical Fictions Research Network conference this weekend, presenting with Tony Keen on our ongoing project looking at screen representations of Roman Britain. While sitting here listening to very interesting papers and wishing I wasn't going to miss the panel on counter-factual history, I got to thinking about the distinct types of historical fiction and how they relate to each other.

Defining what historical fiction is probably seems like a pretty simple job - it's fiction set in the past. But several of the works being discussed at the conference aren't technically historical fiction, but science fiction. Alternative history stories draw on history but are set in alternative worlds where things turned out differently, like The Man in the High Castle, set in a north America where Germany and Japan won World War Two. Another SFF form of historical fiction becoming popular is retellings of real events with fantasy elements added, like Susanna Clarke's Jonathan Strange and Mr Norrell.

I wonder if there's another category that should be included under 'historical fiction' as well. In our project on representations of Roman Britain we'll be thinking, however briefly, about the Wall in Game of Thrones. I'm also looking at a new project on Classical reception in the works of Terry Pratchett, and have been discussing whether the Discworld novels set for a substantial section in a fantasy version of an ancient world (primarily Pyramids, and to a lesser extent, Small Gods, parts of Eric, and The Last Hero) belong in a different category to the Classical references found more generally in Pratchett's work. George RR Martin's A Song of Ice and Fire (the book series behind Game of Thrones) presents a pseudo-medieval world rooted in real medieval practices and including events, most notoriously the Red Wedding, based on real medieval incidents. These are works set in a secondary fantasy world, but clearly drawing on specific periods of real history. (We could even throw in pseudo-medieval retellings of the stories of King Arthur based on medieval literature rather than Anglo-Saxon history, though that's something else again). Aren't these also forms of historical fiction?

This ties in to our understanding of ancient literature as well. I have often pointed out to students that the Homeric poems are works of historical literature, though they are clearly also what would in modern terms be fantasy (I am sure the Greeks did not regularly encounter talking horses or battle rivers). For the most part, these of the type that puts fantasy elements into historical events, though the ancient definition of 'historical events' (e.g. the Trojan War) is a bit different from the modern one! Secondary world fantasy and portal fantasy are rather rare in Greco-Roman literature, perhaps because real world fiction so often included fantasy elements, though underworld narratives might be considered an exception there.

The biggest advantage of writing secondary world fantasy inspired by history rather than historical fiction with fantasy in it, of course, is that the author is released from any need for historical accuracy. All historical fiction takes liberties with history, but in this century, there is an expectation that it will be reasonably, largely, accurate to the current interpretation of what happened (this was not the case when either the ancients or Shakespeare were writing, of course!). I think Martin has actually discussed this though I can't remember where - but writing fantasy inspired by history gives the author so much more freedom to ignore potential objections from modern readers who are inclined to complain about inaccuracies in historical fiction. It also, of course, introduces doubt as to the outcome and allows the author to surprise the reader with events like the aforementioned Red Wedding.

In terms of reception, the clearest difference between these and more traditional historical fiction is that people are less likely to learn all they know about a period of history from these stories (though it might still happen!). But in terms of the way the author uses their material, they clearly exist in the same general sphere. And even audience/reader reception may be similar in some ways, for although the events may be different, where aspects of an historical culture are clearly represented, something of that representation is bound to stick in the reader's mind and colour their idea of that historical period.