I, Claudius: Hail Who?

Apologies if posts are a bit few and far between this month. I've moved, but still not finished unpacking, and it seems that a clothes clear-out is in order, and I'm still trying to get two papers finished by January...

This episode of I, Claudius (which is not suitable for children, by the way) opens by introducing us to Claudius favourite slave/mistress/prostitute, and showing us a Claudius who barely seems to be part of the imperial family any more, but who is living - happily it seems - as an aristocrat in Rome. Herod has written to him and the two seem fairly close, probably because they're the last two standing. Caligula has opened a brothel at the palace, where he is forcing noble women to protitute themselves, and is employing Claudius as a doorman.

We jump forward in time a bit - the baby is now born - and Caligula thinks there is a conspiracy against him so has been killing off more senators and generals. Claudius is going to see him and to bring him Livia's belongings to auction off.

In Germania - you can tell we've moved north as it's pouring with rain - Claudius arrives with two others and is thrown in the river for coming by boat, when Caligula is at war with Neptune. Caligula rants and raves at the other two and is about to have them killed for plotting against him with Neptune when Claudius reappears, having climbed out of the river, soaking wet and covered in mud and a few raggedy bits of green stuff, and engages Caligula in his favourite non-sexual game, quoting bits of Homer at random. Caligula enjoys this so much he promises to save the other two if Claudius' next quote is appropriate, which luckily it is, being something about the greatness of Jove, i.e. Caligula himself.

The other two make a bid for freedom and Caligula gives his new chief soldier (having got rid of Gimli some time ago) the watchword - 'give us a kiss'. This is a very, very bad move on Caligula's part. He takes Claudius in for a drink and talks about his nightmares and how he hardly sleeps and the thumping in his head, and how he is punishing Cassius Chaerea, the guard, for weeping while torturing someone to death. John Hurt is brilliant as ever, totally unhinged and yet bizarrely sympathetic, so that you can see why his poor wife loves him (which Claudius believes is the reason he wants her) and the standout moment is when he asks Claudius, in all sincerity, 'Do you think I'm mad?' Since Claudius isn't mad, he assures Caligula of his absolute sanity. Caligula also think he's the Messiah - as we will see, there's a lot of that about. The only thing that worries him is a prophecy that he (the Messiah that is) will die young, and hated by his own people. I have no idea whether there was a prophecy like that - I don't know much about Jewish prophecy, except for Josephus' claims. It might be an invention of Graves'.

Caligula comes home and yells at everyone for not giving him a triumph, when he had ordered them not to. He then displays his booty from his war with Neptune - seashells. Once more, Claudius and Caesonia (the wife) have to physically restrain him, then beg him not to murder everyone in front of him on sight. Marcus Vinicius gets in trouble though, for mentioning that Agrippa was Caligula's grandfather, so Cassius takes the opportunity to suggest once again that it might be time to get rid of Caligula.

Caligula has one last, mad scene before we get into his demise and fall though. He calls for Claudius, Vinicius and another in the middle of the night and demands that they come to the palace. The three of them sit for hours, terrified, Claudius hoping whatever happens is 'quick', and Vinicius apologises for making fun of him and they all hold hands.

Just at this moment, Caligula jumps in to the room to the clash of a tamborine. He is wearing a gold bikini, big gold earrings, a wig that looks like his late, lamented sister Drusilla's hair, a LOT of make-up and some yellow-gold bits of net. It is strangely glorious. He has summoned them to see him perform a dance to

a song about the goddess Dawn, at dawn. When it is finished, Claudius sucks up as only he knows how, and Caligula tells him that he is to move back to the palace and be married to a young girl who was in the dance - Messalina. Caligula thinks this will be very funny, as she is so young and beautiful. Claudius apologises, but Messalina tells him she would like to be married to him, and he instantly falls head over heels in love with her. Derek Jacobi plays Claudius' complete, irrational, consuming love for this first of his wives who has actually expressed some 'genuine' desire to be married to him perfectly.

Claudius may have done well out of the whole thing, but Vinicius is not impressed. When Caligula gives Cassius the watchword - 'bottoms up' - Vinicius gives him anther - 'liberty'.

We get to see Claudius and Messalina's wedding, to which 'the noble senator Incitatus' has been invited - a rather fine white horse wearing purple and with purple flowers round its ears. I discussed this the other week - this confirms that I, Claudius does indeed 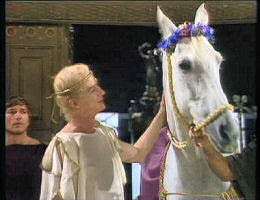 call him a 'senator', which is incorrect, it should be 'consul'. And actually, he shouldn't be there at all - as I said the other week, Suetonius and Dio Cassius only say that Caligula thought about making Incitatus a consul, not that he actually did so.

It's pretty funny though.

Cassius and Vinicius discuss their plans for killing Caligula, along with Caesonia, Claudius and the baby - they want to to elimnate the entire Imperial family in the hope of restoring the Republic. They discuss the problem of the German guards, who are loyal to the emperor (who pays their wages). They want to kill Caligula's two sisters too, which they'll have trouble doing 'tomorrow', as both sisters are currently living in that favourite state for female descendants of Augustus, in exile on tiny islands. Cassius tells Vinicius he'll only Caligula when Vinicius objects, but he's lying.

The conspirators trap Caligula in a corridor in the amphitheatre, though not before he's had a chance to declare everyone's favourite Caligula line - talking to the crowd as they boo him at the amphitheatre, he says 'if you only had one neck I'd chop it through'. His death is really rather tragic - as bloody as the BBC can make it (which isn't very) and I challenge anyone not to feel a little sorry for him as he goes from screaming 'You can't kill me, I'm a god!' to crying out for his dead sister 'Drusilla! Drusilla I'm dying!'. Although since he killed Drusilla, sympathy is limited.

The conspirators murder Caesonia and the baby, but before they can get to Claudius, the Praetorian guard, worried for their jobs, find him hiding behind a curtain and immediately declare him emperor. As the episode ends, Claudius is carried out on the soldiers of the Praetorian and German guards, wearing a wonky laurel wreath and protesting that he doesn't want to be emperor, to no avail.

Caligula has some really mad stuff to do in this episode, but somehow Hurt manages to keep him just grounded enough to hold on to some sympathy and stop him from becoming completely unbelieveable. At the same time, we get to enjoy all those aspects of Roman history that have the widest popular appeal - a mad emperor, an orgy, crazy stuff with animals, assassination and some very silly costumes. Whether Caligula was really that mad is hard to say and there's certainly been some exaggeration going on, even taking Suetonius and Cassius Dio as sources (Incitatus for example). It does, however, make great entertainment. The only problem is where to go from here - the real life emperor Claudius presents as much opportunity for craziness as the rest of his family, but since here he's our hero, he can't be portrayed in the same way as the others, or he'll lose our sympathy. The solution is to look to the wife...
I Claudius Roman history TV