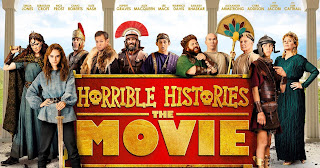 The original Horrible Histories books (the first was The Terrible Tudors in 1993) came out while I was right in the target age group, and they were a huge part of how I learned about history, and how I learned to love it, as a child. The TV show came much later and is something I've seen a few episodes and other sketches from, and I've also watched the TV team's recent BBC sitcom Ghosts, which I definitely recommend!

Most of the story centres around the revolt of Boudicca (and some events are compressed to fit them all in to one film). Boudicca is a good entry point to ancient Rome for children (especially children living in Britain). Her story can be edited to be told without reference to non-PG things (leaving out the rape of her daughters, obviously) and it's an exciting tale, beautifully filmed here.

Accuracy-wise, Horrible Histories: The Movie: Rotten Romans (look at those colons and weep!) has the same issues as the TV series and, to a lesser extent, the books. Horrible Histories is designed to be educational so it's really well researched and includes lots of lovely little details about the ancient world. It's also really nice to see accurate depictions of the ethnic make-up of the Roman world after some people kicked up a stink last year about the depiction of black people in Roman contexts - the Roman Empire covered a huge area including North Africa, and others came in through trade and migration from outside the Empire as well.

However, because the aim is to appeal to children and catch their interest, both show and books tend to leap on the most weird, ridiculous, strange "facts" they can. And so this film includes a couple of odd things - the idea that gladiator sweat was highly prized is often repeated by tour guides but tricky to track down a source for, but the biggest offender is definitely the scene showing a dinner party where everyone vomits halfway through so they can eat more. This is something that happens in The Hunger Games: Catching Fire, not real life! The persistent story comes from the Latin word for the exit to a theatre or amphitheatre - the vomitorium.

Quibbles aside, I enjoyed the film a lot. Most of it offers a fun romp aimed at children but there are some lovely pop culture jokes in there for grown-ups as well. The prize for Inception-Worthy Levels of Pop Culture Joke goes to "I'm Fartacus - and so's my wife!", a reference to a joke in Monty Python's Life of Brian, which is itself a joke referring to Kubrick's 1960 film Spartacus. But the whole film was worth it for the few minutes before the credits which featured an absolutely beautiful bit of casting - the fabulous Kim Cattral as Agrippina and, most importantly, Derek Jacobi as Claudius. No one else in the cinema had a clue why my brother and I bent over laughing and couldn't stop for the entire scene. It was just so wonderful hearing him speak as Claudius again! He sounded exactly the same! Though Jacobi looks a lot better than 1970s BBC make-up had him looking when they imagined Claudius towards the end of his life.

This is a fun afternoon out at the cinema - and here's hoping it'll get another generation interested in ancient Rome!