The Roman Mysteries: The Gladiators from Capua

Wow. I loved this book! Exciting, well paced and a real stay-up-till-2am-finishing-it job. Whether this is simply because, for a very sqeamish person, I have a quite bizarre fondness for stories about gladiators, I'm not sure, but I was hooked.

The story is set during the inaugural Games in the Flavian Amphitheatre, later known as the Colosseum, which took eight years to build and was opened by Titus in AD 80. The narrative is solidly structed to allow us three different views of the action. First we experience the Games in an historically accurate fashion, as a child or woman in the Roman Empire would have experienced them, from the very top tiers of seats in the massive amphitheatre. Then we get the experience we as readers really crave - the action is narrated from within the arena, with two of our heroes taking part in it, the Gladiator point of view. Finally, we see the action take place from the Imperial Box, so the narration can cover events from the best seats in the house. This brilliant structure allows readers to get the points of view they want, those of the participants and the people who can see the action best, while also educating child readers about how most people would really have viewed the Games (and although I referred to that first view as 'historically accurate', all the ways in which the children take part are historically plausible).

The story is also compelling, opening with a flashback featuring as yet unknown participants (I like devices like that, they always grab my interest) and carrying straight on with Jonathan's memorial service. I knew Jonathan wasn't dead and that he would come home in the end, of course, and when Tigris barked at the gladiators it was pretty obvious where he was, but there is enough tension in the story that it feels uncertain and keeps the attention anyway, since the reader doesn't know where or when Jonathan will turn up and keeps waiting for his appearance. First time readers might even wonder if he will, since The Roman Mysteries do adopt something of an Anyone Can Die policy, though I think they stay on that fine line that holds back from killing a character so beloved readers will be put off - our four heroes are safe, as are certain 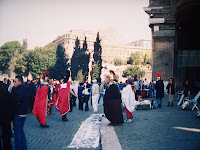 other characters. I think this is important in a children's book, or at least, it was for me when I was a child (I have never read another Philip Pullman book since he killed off Fred. I was that sort of child).

People dressed as centurions - not gladiators, for some reason - pose for photos with tourists outside the Colosseum
There were some fun shout-outs to other bits of popular culture, some deliberate and some that may only exist in my confused little brain. The reference to the lion and the 'unicorn' (a mistreated antelope) is presumably deliberate. During a conversation about the power of blood, the lines 'Blood is power' and 'Blood is life' leapt out at me as similar to lines from Buffy the Vampire Slayer, 'The Gift', and in a not dissimilar context, though that might just be my my obsession speaking. The large woman who wipes away tears as she sends Flavia and others out to die immediately had me picturing the giant Nurse who grows fond of Jill and Eustace but plans to eat them in The Silver Chair, though again that may just be me (though poor Flavia was being unusually dim not to wonder why only slaves and orphans were being used and why the woman was weeping). The lion and the rabbit reminded me of Monty Python and the Search for the Holy Grail, but since this was a real Roman attraction, that really is just me.

Even more effective were the call-backs to previous stories, especially The Twelve Tasks of Flavia Gemina. Somehow, the fact that Monobaz the lion had played an important and separate role in a previous story makes the resolution to this story seem more real and plausible than it would have if the whole relationship had appeared only in this book.

The book also makes beautiful and effective use of religious imagery, chiefly Christian, which is of course very appropriate for a story set in the Colosseum featuring a Christian character. The earlier conversation about the power of blood is reiterated in a considerably more life-affirming 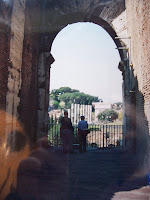 fashion and Jonathan's execution - on the third day - subtly but clearly evokes the Crucifixion and, of course, the Resurrection. Writers of certain long-running British science fiction shows, take note - this is how you use religious imagery properly.

View of the Arch of Titus, seen from the Colosseum
There is a lot of blood in this book, and it doesn't hold back in its depiction of the realities of the Games (in fact, like most modern fiction, it emphasises the amount of death and destruction, as it implies that most gladiator fights are, at least potentially, to the death) which presumably may concern some parents. In my experience, most children love gory stories, so they will lap this up. Some - child-me included I'm afraid - are a bit more sensitive, so might need this read to them by a comforting parent, and possibly followed by something lighter. I don't think any children will be too worried though (and, as the book reminds us, children in the past have put up with much, much more, as parents of viewers of certain long-running British science fiction shows might like to take into account before they complain about homicidal pepper pots). The book nicely balances Lupus' enjoyment of the Games with Flavia's traumatic experience to cover all points of view and give all children a figure to identify with, while Nubia (who, poor girl, gets given the most awful Sophie's Choice towards the end) remains a balanced observer throughout.

The depiction of the action in the Colosseum is all accurate. The books tends to describe the most spectacular events possible, but since these were the inaugural Games for the Colosseum, that makes sense. As I mentioned above, the narrative does tend to emphasise the deadly events, though it also depicts the glamour and the attraction of the life of a gladiator for some. Nubia's brother clearly is not anticipating imminent death and loves his new life, so we can infer from that that the death rate may be especially high during these opening days, and both Emperor and crowd are seen sparing people. Even Flavia briefly experiences the upside of life as a gladiator (in a scene which immediately brought some of the sweeping shots from the film to my mind, despite the watery setting of the book's middle section). On the other hand, the sheer cruelty of the Games, especially as regards the execution of prisoners, is also laid bare. Jonathan is able to become a gladiator despite being a child because Domitian has ordered some child gladiators as a novelty act, which seems pretty plausible given Domitian's character as we know it from later sources.

Well, as you can tell, I quite liked this book! My favourite of the series so far, and it will probably be my favourite overall, since it has so many of my favourite things - very tight structure, Christian imagery used well, gladiators, danger but no excessive culling of major characters and I think there was even an important dream in there somewhere as well. At some point I will watch

the TV adaptation and no doubt be thoroughly disappointed with the lack of lions, flooded amphitheatres and blood and guts all over the place...

Reconstructed view of the Colosseum from the arena, from Gladiator
Books Children's Literature Gladiators and arenas Roman history The Roman Mysteries