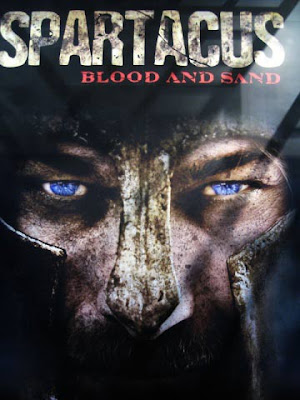 Well, I'm watching the first episode of Spartacus: Blood and Sand. I can't promise I'll watch any more of it - it depends how bad (i.e. how full of gratuitous sex and violence) it turns out to be. But I'll give it a go. It is written by Buffy writer Steven DeKnight, after all, who wrote some rather good episodes before being given 'Dead Things' and 'Seeing Red'.

There's a nice opening shot panning from the cells underneath an amphitheatre to a gladiatorial combat above, which unfortunately is marred by some really bad CGI. Perhaps the producers of the TV adaptation of The Roman Mysteries were right to leave the Colosseum out after all (though I would have thought some model work might help).

In flashback, Haldir of Lorien persuades a bunch of men to go fight, there's some sex and portentous doom-mongering from Spartacus' wife, and Spartacus departs for battle while Our Lady of Soundtrack Sorrow wails in the background. The CGI backgrounds make it look like 300 - in a good way for a minute, then the battle kicks in and it's bad again. Gladiator, this isn't. And since when did Romans use Anglo-Saxon swear words?! ('Fuck'. Repeatedly. Granted, if I was in a battle, I'd be swearing, but in my own language! OK, I'm nit-picking, it's not like it's in Latin or Thracian, but it stands out when they shout it so often).

Spartacus and some others hang around complaining about the food and sounding exactly like the Orcs from The Two Towers - I kept expecting them to try to eat the legs of the shortest men present. And both Mum and I keep hearing one word as 'Legolas' (Dad has sensibly pointed out it's probably 'legates'). There's a lot of pretty CG snow. Meanwhile Haldir, having changed somewhat since being the

campest Elf among a pretty camp bunch, has some sex with a blonde woman and explains the plot, which involves fighting Mithridates. Oh look, full frontal female nudity. Lots of it.

Some Orcs from The Two Towers. Not, actually, extras from Spartacus.
(On the subject of accuracy, we don't actually know anything about Spartacus outside the events of the slave war except that he was Thracian, so this area is pretty much free reign and outright invention is fair enough, when there's no history to contradict).

There's a falling out with the Romans they're supposed to be fighting for and then the wife is attacked, and puts up a pretty impressive fight, even saving Spartacus himself as he runs to her aid. But the village is torched. Then they have sex. Then Haldir turns up, all cross because Spartacus and the Orcs have killed a tribune, and takes the wife off to slavery. Spartacus himself wakes up days later on a boat.

Whizz across the map to the gladiator training school at Capua, where Haldir's father-in-law is putting on some Games. And here we are at our first orgy! The lovely John Hannah turns up, playing a lanista, Batiatus, introducing some new gladiators to the party-goers. He is married to Xena, Warrior Princess. Haldir presents Spartacus as a prisoner to be executed in the arena. And with that, we've got to where we started, with Spartacus being led up into the arena - not, it turns out, to be executed outright but to fight a house gladiator (as Maximus does in Gladiator, in the scene that always reminds me of Robot Wars). The audience are depicted as mixed gender, incorrectly (women and children had to sit in the very top rows only). Really, the amount of blood flying around looks more like Wednesday and Pugsley's version of Hamlet from The Addams Family than anything else.

Of course, Spartacus wins his fight, spurred on by a disembodied female voice that it presumably meant to be the wife. John Hannah looks a bit constipated, which I think means he's cross (I love John Hannah, as many girls my age do, ever since Four Weddings and a Funeral and Sliding Doors, but he's better than this). The crowd demand that he live, so of course Haldir has to suck it up and let John Hannah buy him (and it is indeed 'legatus' that they keep saying, to Haldir, just to confuse us even more). John Hannah gives him the name 'Spartacus', after a legendary Thracian king. End of episode.

I heard an interview with John Hannah on the radio the other week in which he talked a lot about Spartacus. He mentioned some interesting things. One person working on the production (but not a writer or anything - it's not that bad!) had to be told why they couldn't say 'is the Pope a Catholic?' which goes to show how much reading that particular person had done (we're a good few decades Before Christ here). Hannah also defended his use of his own accent (though slightly toned down) on the grounds that if you're working in translation, it doesn't matter what accent you use. I can understand the argument there, and he has a point, but on the other hand a mix of British-sounding, Scottish, American and New Zealand accents is a bit off-putting. Just as Lucilla, with her odd-one-out accent, stands out in a somewhat distracting manner in Gladiator, the sheer variety of accents here does rather confuse the brain. It doesn't necessarily matter which accent you use for Ancient Rome - just pick one!

The other comment Hannah made which I thought was particularly revealing was that the sex and violence is justified because ancient Rome was such a 'debauched' time and place. There may be an argument along those lines for the violence - ancient Rome was clearly particularly violent since gladiatorial games were such an important part of the culture - but the idea that it was sexually more debauched than other periods is one created and perpetuated first by Christian evangelists, and later by popular culture. The early Christians were (perhaps understandably) not happy with Roman culture for its persecution of Christians and the decline of the pagan empire and rise of Christianity coincided with the decline in facilities such as bathhouses, theatres and amphitheatres - a decline Christinity was partly, but only partly, responsible for. So, early Christian rhetoric depicted Rome as a hotbed of sin and vice, only ended by Christianity itself. This was repeated in the Christian novels of the nineteenth century, which were made into the blockbusting films of the twentieth century (Ben-Hur being the most successful). Now, the Christian aspect has been left aside or forgotten, but the idea that Roman society was much more sexually 'debauched' than any other remains, mostly because it makes good television.

In reality - well, Rome was fairly sexually active as a society, it's true. There were brothels, most famously at Pompeii, they had pornography, many people had affairs or slept around. How, exactly, is that different from any other culture? The Victorians tried to pretend some of these things didn't happen, but they're common to most societies. The main difference in ancient Rome was that free men usually owned slaves, who were considered to be property, and therefore sexual violence towards slaves was common. Emperors also had greater than usual licence to act out their fantasies on anyone around them. But it important to bear in mind that these emperors - the 'bad' emperors - were depicted that way in the histories in order to show how bad they were, not because this was considered normal behaviour. And it is worth bearing in mind that most of the sex in this episode of Spartacus was, in fact, legitimate marital sex (until we got to the orgy of course).

Ah well, here endeth the lesson. I doubt anyone is going to be convinced that Rome wasn't a hotbed of sex and debauchery any time soon - it's so much more fun for TV and film to push the sex angle because in one thing, humankind has not changed - we still like to look at pretty people without their clothes on. Spartacus, meanwhile, wasn't as bad as it could have been - I particularly liked the bit where the wife, against all expectation, fought off a crowd of would-be rapists/murderers rather effectively and the opening shot was going well until it was ruined by dodgey CGI. Whether I watch and review any more of it may depend on whether I can work out how to use the Sky recorder thingy though...
Gladiators and arenas Roman history Spartacus TV