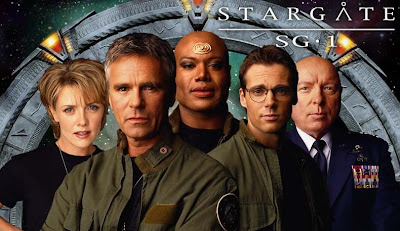 ‘Window of Opportunity’, the ‘Groundhog Day’ episode of Stargate SG-1, is an acknowledged classic. Absolutely hilarious for the most part, its conclusion is unexpectedly dramatic, very moving and a nice reminder of an often forgotten aspect of Colonel O’Neill’s character.

It also occurs during that period in Season 4 when the writers were really pushing the Carter/O’Neill romantic subplot (coming just after ‘Upgrades’ and ‘Divide and Conquer’ and shortly before ‘Beneath the Surface’, all of which included romantic moments between the two). So, naturally, that comes into O’Neill’s consequence-free activities once Daniel has pointed out the ‘window of opportunity’ open to him and Teal’c (demonstrating that Daniel really is rather more intelligent than either of them). The best thing about it is, O’Neill is such a good officer, he resigns from the Air Force before kissing Carter, even though it really couldn’t make any difference. (We only see them kiss, but I often wonder, from his subsequent grin, whether he ever thought of doing this earlier in the loop, allowing more time for other activities...).

The time loop is started by an alien archaeologist who wants to go back in time. On their second encounter, O’Neill demands to know what kind of archaeologist carries a weapon, to which Daniel replies ‘I do!’. In science fiction and fantasy, most archaeologists seem to carry weapons – River Song, Indiana Jones and that well known amateur archaeologist Jean-Luc Picard would not be seen without their various arms. In real life, on the other hand, O’Neill would have a point, though I suspect an archaeologist who was threatened could do a fair bit of harm with a pointy trowel or a shovel.

Unable to break the time loop, our heroes come to the conclusion that they will only be able to work out how to end the loop if they can translate the text on the altar/time machine that started it all, which is a planetary history. The text is in one of Stargate’s made-up ancient alien languages, which is similar to Latin (it includes words like ‘dommo’ for ‘master’, which is similar to the Latin ‘dominus’ but, of course, doesn’t have to be at all accurate). Daniel doesn’t have time to translate it all within the 10-hour time loop, so O’Neill and Teal’c have to learn Latin and memorise the sections they’ve already translated so that they can get together a complete translation.

I must confess, I always wonder why O’Neill and Teal’c have to actually learn Latin, when surely Daniel could translate a section at a time and they could simply memorise the sections he’s already done. Perhaps, since the language is like Latin but not the same, Daniel needs their help with the translation, and they need to understand Latin to help him properly. Possibly. Anyway, the fact that O’Neill and Teal’c apparently have time to learn a new (inflected) language is often cited as an indication of just how long they must have been ‘looping’. And the sight of Colonel O’Neill reading a book called Latin for the Novice and looking like he wants someone to just shoot him now is very funny.

The episode does insist on treating language as if it were mathematics, though, as other things have done before. O’Neill testily tells Daniel that a certain word means ‘give up’, not ‘surrender’, but if the language is anything like Latin, those two things would be indicated by the same word. Daniel’s correction of ‘conqueror of time’ to ‘master of the uncertain past’, being based on context, is a bit more plausible.

This episode deserves its excellent reputation, and I urge you to track it down if you haven’t seen it, it’s hilarious. It also features a rather beautiful alien archaeological site, with a red sky,

desert climate and various monumental works, some of which look a bit like stone torpedoes stuck in the sand. Plus the team get to break out the sand-coloured khaki and wear big sunglasses. All in all, a good break from the remarkably large number of planets across the galaxy that look just like Canada...
Archaeology Latin Sci-Fi and Fantasy Stargate TV