Cris over at Here, There and Everywhere is hosting a Blog-a-Thon about oceans and oceanic wildlife as part of World Oceans Day, which is June 8th, and asked me if I’d liked to take part, so here I am! (Spartacus review to follow early Wednesday).

There’s loads I could say about ancient ideas about the sea, the ocean and marine wildlife and the idea of ‘ocean’ rather than sea is especially interesting. In myth, Oceanus was a Titan, son of Sky and Earth, while geographically speaking the ocean was the water that surrounded the whole Earth – for, in ancient conceptions of the world, the Mediterranean sea sits in the middle, the three continents (Europe, Asia and Africa) sit around it and Ocean/us flows around them all.

The Babylonian map of the world, the oldest we know of, showing the ocean that surrounds the world - the world being, here, Mesopotamia. Later, Greeks and Romans would include the three continents of Europe, Asia and Africa, but they still surrounded all three with Oceanus
The problem for this blog, though, was that I needed to find a representation of a Classical idea about the ocean in modern popular culture. I had a few ideas, most of which I don’t have time to do in a day, but then I remembered that the theme for this year’s World Oceans Day is oceanic life, and people are being asked to choose their favourite ocean creature to write about. Well, my favourite oceanic life form has always been the whale, thanks to a primary school project (specifically the Blue Whale, but any whale will do!) and that’s what led me to Pinocchio.

The 1940 Disney film of Pinocchio is based, reasonably faithfully, on a 19th century moralising story by Carlo Collodi. Two of the incidents in the film draw particularly on ancient references: the whale, which I’ll come to in a moment, and the transformation of the boys on Pleasure Island into donkeys. Although the film explains this as the result of the boys acting ‘like jackasses’, the concept is much older.

The two best known transformations of man into donkey in literature are that of Bottom in A Midsummer Night’s Dream, and that of the protagonist Lucius in the Latin second century AD novel Metamorphoses, also known as The Golden Ass. Bottom is the victim of the fairies’ quarrel, but Lucius, like the protagonist of the earlier, Greek, story ‘Lucius, or the Ass’ which The Golden Ass is loosely based on, is turned into a donkey as the result of his own foolish curiosity. He watches a witch turn herself into a bird by magic and wants to try the same thing, so that he can fly, but is accidentally turned into a donkey instead. The only cure is to eat roses, but finding some roses to eat proves more difficult than he’d anticipated and, in The Golden Ass, he misses his chance and has to wait a whole year until roses bloom again before he can be returned to human form. Like Lucius, Pinocchio is almost transformed into a donkey (in the book he is actually transformed) because of his own foolishness, though in Pinocchio’s case curiosity is combined with indulgence. Lucius is eventually saved by the goddess Isis, who points him in the direction of some roses, just as Pinocchio is saved by the Blue Fairy.

The reason this post is appearing for World Oceans Day, though, is the whale. The most obvious forerunner to this is, of course, the Biblical story of Jonah and the Whale. Both Jonah and Pinocchio find redemption in the belly of the whale. Jonah is swallowed up while trying to escape his duty and eventually agrees to obey God is order to escape the whale, repenting and being forgiven. Pinocchio, on the other hand, goes to find the whale in order to save Gepetto, and proves that he is brave and true in the process, and when he sacrifices his life for Gepetto he is redeemed and turned into a real boy by the Blue Fairy. Pinocchio is, then, rather more proactive than Jonah in his story and self-sacrifice is added to obedience as a required quality, but it is a similarly redemptive, new-birth type experience from the belly of the monster.

The part where Gepetto lives inside the whale on his ship also reminds me of another ancient Greek work of fiction, the 'True Story' by Lucian. The title is ironic – this is a fantasy adventure involving trips to the moon, and to the land of the dead, and to the island of dreams. Among the hero’s other adventures, he spends over a year living inside the belly of a whale that has swallowed his ship. As in Pinocchio, the story imagines that whole ships can float around inside the whale’s stomach and eat the smaller fish the whale swallows (how the whale doesn’t starve to death I’m not sure) and in the 'True Story' there’s even a battle between different ships that have been swallowed and the whale’s stomach contains forests and islands. The story may have been a direct influence on Pinocchio, as Lucian’s hero also escapes by lighting a fire, though in this case the fire is not designed to make the whale sneeze – rather, the creature is slowly burned to death from the inside. Eeeew. 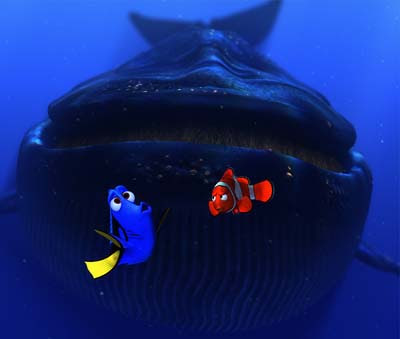 Despite the obvious essential problem that we now know that anyone who had been swallowed by a large mammal would be killed by its stomach acid, and despite the knowledge that many large whales only eat plankton, and killer whales would probably bite rather than just swallow, the motif of people being swallowed by whales is still around. The stomach acid problem can be side-stepped most easily by not allowing our heroes to get further than the mouth, like Marlon and Dory in Finding Nemo and, most recently, the Doctor and Amy in ‘The Beast Below’.

‘The Beast Below’ is indicative of another oceanic trend – now that we know more about the oceans, space is the new area of choice for marine-flavoured fantastical adventures. Other planets may be the new frontier, but space itself is often depicted like a giant ocean, and in Star Trek, Starfleet is clearly based on naval motifs (even bell-bottomed trousers in some of the films!) and many of the battles work like submarine battles. The whale-swallowing-people idea, meanwhile, is taken to its furthest extreme by that most extreme of sci-fi shows, Farscape. The whole series is set inside a giant space-whale (the species is usually referred to as Leviathons). When my friends first told me this and insisted that I watch the show I thought it sounded completely ridiculous, and it took a while to get used to, as there’s a lot of suspension of disbelief involved (what do they breathe? Where is the stomach acid? Just.... how? And who thought of flying around space inside another animal in the first place?). I got over it eventually, as Farscape is a great show which, deep down, is based on real, human emotions – but you do have to look very determinedly past the giant space whale, the fart gags, the puppets and the make-up to see it.

Of all the people-swallowed-by-whale stories, Pinocchio is one of the best – more emotionally satisfying than Jonah, slightly more logical than Lucian, more exciting than the whale section of Finding Nemo, definitely more logical than Farscape. It fits this allegorical, moralising fable that it ends with a Biblical allusion, and an allusion to one of the most obviously mythical, allegorical parts of the Bible at that, but Pinocchio takes the story of Jonah and makes it something more affirmative, and less oppressive, than the Biblical story. The only unfortunate thing about it is that the whale, Monstro, must be a monster, aggressive and unpleasant, when in fact many

whales are relatively gentle creatures – ‘The Beast Below’ has the edge there, depicting the ‘Star Whale’ as a gentle, kindly being. That’s a minor niggle though – after all, the giant animal that swallows our heroes is rarely the good guy!
Ancient literature Ancient Near East Biblical stories Blog stuff Children's Literature Disney Films Mythology Sci-Fi and Fantasy