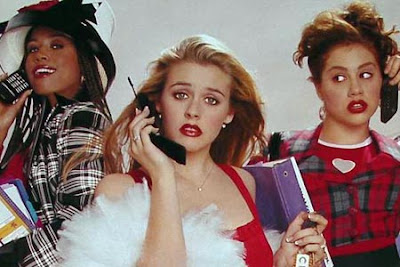 I've mentioned a couple of times, I think, that for some years when I was a teenager, I thought Spartacus' name was Sparatacus, thanks to this movie. This being a rather egregious mistake that continued far longer than it should have done, I thought perhaps it was worth a blog post to itself (also, Clueless is awesome).

For those unfamiliar with the film, Clueless is a mid-ninties teen flick based loosely on Jane Austen's Emma. Me being a teen in the mid-nineties, you can imagine how much I love this movie, though there's more to Clueless than just teen fun. Taking it's central plot from Austen, I actually prefer this movie to the original novel - I find Austen's Emma too overbearing and irritating, whereas Alicia Silverstone somehow manages to make Cher a sympathetic and endearing character. Even more importantly, Cher's initial objection to her friend Thai's crush is not to do with money, but rather the fact that he's high all day every day, which comes across as a lot more reasonable (and he's cleaned up by the end of the film). The film is also hilarious ('My plastic surgeon doesn't want me doing any activity where balls fly at my nose'; 'There goes your social life').

This is a tightly structured film and Cher's mistake concerning the title of Spartacus is not just there for a cheap laugh. Cher is pursuing the new guy at school, Christian, but is unfortuantely completely oblivious to certain facts that mean this will never happen. Christian's declaration that he has a 'thing' for Tony Curtis doesn't clue her in, and nor does his choice of movies for a videofest - Some Like It Hot (about half of which Curtis spends in drag) and Spartacus. We join them during the early part of Spartacus, watching the scene in which Laurence Olivier's Crassus interrogates Curtis' Antoninus, whom he has recently purchased.

Crassus and Antoninus were the participants in another scene that takes place shortly after this one, which was cut from the film's original release but restored in 1991. The scene features Crassus trying to seduce Antoninus while discussing how sexuality is a matter of taste rather than morality via some appropriately sexy metaphors involving shellfish. Just as this scene is coming up, Cher tries to seduce Christian by playing footsie, but he brushes her off saying he wants to watch 'this part - this is good'. To be fair, as a 13-year-old watching the movie, I probably wouldn't have worked out the problem for myself if my best friend hadn't pointed it out to me, but poor Cher really is being very clueless here (especially given Christian's fondness for designer shoes). Her mistake with the name is really a symbol of her total lack of comprehension of the situation in which she's found herself, while the Roman-set film is representative of sexuality, and of Christian's sexuality in particular, which is particularly appropriate given ancient Rome's reputation for orgies and pornography.

It's also worth noting that much of Cher's determination to completely 'make-over' Thai in every respect from clothes to hair to accent to leisure activities has a very Pygmalion-like feel to it. Cher does not fall for Thai and the dialogue compares her efforts to Dr Frankenstein rather than either Pygmalion or his well-known modern counterpart, Professor Higgins, but her obsession with completely re-modelling the girl echoes the Pygmalion story more than the horror - something that's unlikely to be entirely conincidental in a film so full of classical allusions of the non-Greco-Roman variety (including Cher's observation that a book she read noted that 'it is a far, far better thing doing things for other people' and her pretty good knowledge of Hamlet, gained via the Mel Gibson-starring movie version). The clip from Spartacus that we see even refers to Curtis' character teaching children 'the classics'.

Being as clueless a teen as Cher, if not more so, this represented my entire impression of ancient Rome in popular culture for some years, until UK Gold started to repeat I, Claudius! I know 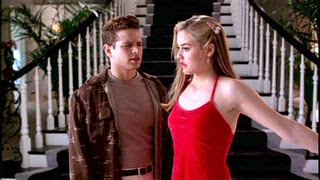 better now, but I will forever love this movie for inducing a lifelong fondess for Paul Rudd, introducing the world to a very young (braces-wearing) Turk from Scrubs and for reminding me of a time when taking photos to help yourself choose a dress or phoning someone in the same building on a mobile seemed like such ridiculous things to do that only the super-rich would even contemplate anything of the sort.
Films Mythology Spartacus