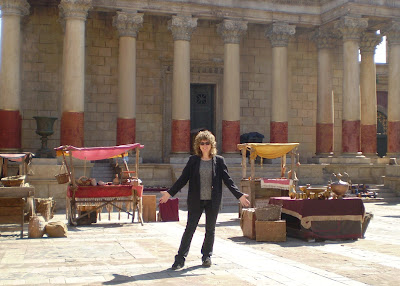 Following yesterday's review of The Man from Pomegranate Street, Pop Classics is delighted to present an interview with children's author Caroline Lawrence, author of The Roman Mysteries, in which she discusses writing for children, writing about history and the fate of poor little Popo. Enjoy!


Why did you want to write novels set in the ancient world?

I read Mary Renault’s magnificent historical novel The Last of the Wine when I was 18, and it was the first thing that really sparked my interest in history, and Classical History in particular. My overriding desire was and still is to GO BACK IN TIME TO ANOTHER WORLD, be it the world of Classical Greece, Imperial Rome or – more recently - the Wild West. Because of Renault’s book, I studied Classics at University, including Greek and Latin.

Which Roman-set books, films etc influenced your writing, if any?
Two writers were huge influences on my earliest books, (The Thieves of Ostia and The Secrets of Vesuvius.) They were Mary Renault and Gerald Durrell. The wonderful 1966 film A Funny Thing Happened on the Way to the Forum was - and still is – my favourite ‘Classical’ film. I was also deeply impressed by Fellini’s Satyricon, though many aspects of it disturbed me. I saw it while I was an undergraduate at Berkeley, studying Classics, and I remember thinking ‘That’s what it would have been like!’

Steven Saylor and Lindsey Davis have also been wonderful literary role models and great inspiration, but I only discovered them after I’d begun writing my own books. The film Gladiator hadn’t come out when I was writing my first book. It was a terrible disappointment, mainly because my hopes were sky-high and it was SO inaccurate.

What made you choose the reign of Titus as the setting for these stories?

My starting place was the eruption of Vesuvius in August of AD 79, and when I discovered that Titus had just become emperor it seemed the logical conclusion to learn all I could about him. It is fitting that my series ends with his death just over two years after he became emperor. In fact, the final mystery is this: Was Titus death natural or was he murdered? And if the latter, whodunit?

Why did you decide to write children’s novels?

When I first determined that if I didn’t ‘start writing now, I never will’, I was teaching primary school. I also had a son aged about 12. Through him I had rediscovered the joy of kids’ books. The best of these can be enjoyed by adults as well as children and are often better because the plots usually clip along and the message is almost always uplifting. Some of my favourite books are children’s books. Also, I suspect my ‘mental age’ is around 11. So it seemed logical to write books for kids. 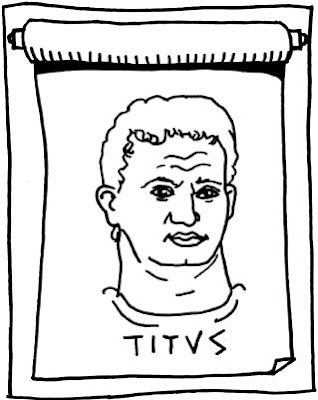 The Roman Mysteries feature quite a few historical characters alongside fictional ones. Is it easier or harder to write ‘real’ people?

Not really. I just read about them and their writings (if any) and get an idea of their character from that. Sculptures help, too. I like to get a visual image in my head. For some reason I picture Titus as William Shatner and Quintilian as Perry Mason.

Caroline's own drawing of Titus, by way of William Shatner. Now that's a mental image that's going to stick!
How didactic are your books intended to be? Do young readers seem more interested in ancient Rome as a result of reading these books, and do they learn anything?
I try to fit in as many facts as I can and make them as accurate as possible. But not dry facts: the funny, fascinating, disgusting and exciting facts. I also pack the books with sensory details of the world of ancient Rome: the smells, scents, tastes, sounds, customs, etc. My fans are usually a certain type of child - often those of above average intelligence - who are not afraid of Latin words and strange names. Ten years on from the publication of my first book, many of my early fans have gone on to study Latin, Greek or Classical Civilization in secondary school and university. I just had an email from a long time fan at Swansea who is writing her dissertation on the concept of Romance in the Roman World. She hadn’t even started Latin when she first began reading my books.

I think the Roman Mysteries walk a fine line between glossing over the more difficult parts of Roman history, and keeping the books appropriate for primary-age readers, and I think they do so very well. Did you ever worry about including too much more ‘grown-up’ material, especially in terms of sex, violence and slavery, or about glossing over these issues too much, resulting in a distorted picture of the Roman world?

That’s why I have an editor! If I am too caught up in my own world and write something too strong, violent or explicit, they usually rein me in. In almost every case, I know they are right. But as a parent and ex-primary-school-teacher I also know that you can suggest things without being explicit.

Have you ever considered writing Roman-set books for older readers or adults? If so, what would you do differently?

I tried writing a Young Adult spin-off called The Flavian Trilogy and it was deemed too strong. So I’ll have to come back to it in a year or two with ‘fresh eyes’.

What about younger readers? Do you think it’s possible to present a version of the Roman world that feels true while keeping it suitable for younger children?

I’m currently working on a spin-off for younger readers (6, 7 & 8). Its working title is The Threptus Mysteries and the first one has lots about Roman poo and sewers. I hope it will especially appeal to boys of that age group. Again, I have to use common sense, instinct and my editor!

Will you be writing any more about Flavia, Nubia, Jonathan and Lupus?

I hope to mention them in both my spin offs: The Threptus Mysteries for younger children, and the Flavian Trilogy for the YA market.

Would you consider writing about other parts of the ancient world, other periods of ancient history, or other characters?

Yes, I’m now deeply involved in the American ‘Wild’ West, which has quite a lot in common with ancient Rome. Virginia City in the early 1860’s was a ‘horse-powered’ society, with about the same level of medical knowledge as the ancient Romans, and the same tension between law and lawlessness. As with the Roman Mysteries, I am introducing ‘real historical characters’, using the rich reserve of primary sources and lots of great artefacts. For research I am travelling and watching lots of Western movies. [You can read about The Western Mysteries here, and keep up with Caroline's research in this area at the Western Mysteries blog.]

And finally... what happened to Popo?!
Popo was kidnapped by the wet nurse who lost her own child in Roman Mystery 13, The Slave-girl from Jerusalem. She spirited him away to the furthest realms of the Roman Empire: Britannia! The first book in my previously-mentioned Flavian Trilogy picks up the story when Popo is 14 and 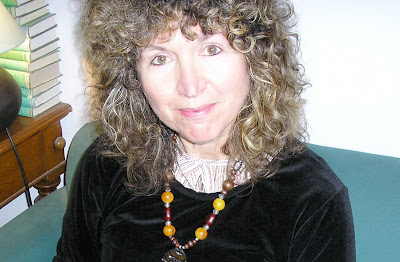 ignorant of the fact that he has an identical twin in Ostia. Let’s hope I can find the right balance when I come to revise it.

Many thanks to Caroline for taking time to talk to us!
Books Children's Literature Roman history The Roman Mysteries