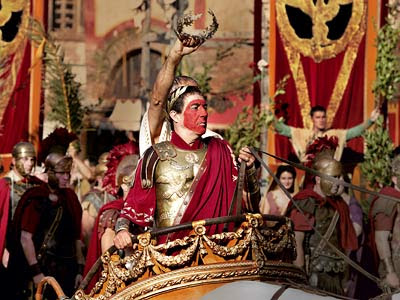 Near the beginning of this episode, Caesar declares that the war is over, and much of the episode deals with the fallout from that ending - the biggest problems being that several characters consider the war to be far from over, and those that do can't cope without it.

Brutus and Cicero endorse a Triumph for Caesar, while privately bemoaning their failure to die nobly like Cato and Scipio. Caesar demonstrates his awareness of how many of them want him dead - one of the most intersting facets of the historical Caesar's character and a nice element to bring in here (along with his warning that 'Rome' will not forgive them a second time - one of the those TV prophecies that are carefully designed to come true). The music is clearly of Brutus and Cicero's opinion, as you'd think we were watching Commodus kill Marcus Aurelius, judging from the sombre tone.

Servilia was obviously really badly hurt (I'm not even going to contemplate how) by Atia's thugs at the end of the previous episode, as she's currently unable to walk and her head is all wrapped up. Atia pops over to pretend to be concerned. Atia lies about Octavia's whereabouts because Octavia has run off to indulge in self-harming, so Octavian goes to get her. She appears to have joined the cult of the Great Mother. Octavian complains that the priests don't really care about her, they just want her money, which makes me smile, as there is some implication (arguably) towards the end of Apuleius' Golden Ass that priests of the cult of Isis behaved in this way. Octavian himself appears torn between admitting he misses her, despite the uncomfortableness associated with this due to their previous encounter, and forcing her to return to protect their family's good name. The cult of the Great Mother was a mystery cult which we know little about - this version looks a little too Far Eastern to me (the cult was Eastern, but not Far Eastern) but really, writers and directors have quite a lot of freedom with cults that were as secretive as this one.

Boring Soldier is campaigning (in an effort to become even more boring?!). Caesar dredges up an unfortunate Gaulish leader who was apparently 'King of all the Gauls' (did all the Gauls have a single king? This isn't my area, but somehow I doubt it). Dodgey Soldier gets into a sulk because he's left the army and therefore can't march in the Triumphal procession, which surely he ought to know already, and there's no point whinging about it even if he didn't. Mark Antony finds 'dressing up and playing at being a god' silly, which is puzzling given his later prediliction for doing exactly that.

Octavia is giving Atia the silent treatment while Atia actually shows a glimmer of genuine motherly concern over the wounds on her arms. Only a glimmer, though. An (unhistorical) illegitimate son of Pompey's turns up outside Servilia's house, screaming about how much he hates Caesar, so of course she takes him in even though he seems to be a sandwich short of a picnic.

The Triumph starts with Octavian performing his priestly duties, painting Caesar's face red before the procession (apparently Mary Beard has expressed scpetical views about this tradition, but there's no way a TV programme is going to miss that opportunity!). The Gaulish 'king' is executed in front of the crowd.

As the mess is cleared away, the town crier reads out a series of crowd-pleasing announcements (complete with actions - are these the oratorical hand movements Flaccus tries, with unfortunate results, to replicate in The Slave-Girl from Jerusalem?). Boring is shocked to discover that the election he is standing in is rigged because apparently he lives on a different planet from everyone else. This distracts him from Dodgey's plan to free and marry Eirene - a plan which would be all well and good if he'd bothered to actually check whether Eirene wanted to marry him first (he hasn't quite grasped the concept of 'free', it would seem). Dodgey wants to go and settle down in the country, so Boring helps him out.

Cicero has got hold of a copy of a document called 'A Call to Virtue', purportedly written by Brutus and calling for a rise against Caesar. It has been put together by Servilia and Cassius as a way of forcing Brutus to act. Cassius looks wonderfully slimy, cast in the traditional Shakespearian mold of a Cassius who is determined to do for Caesar and drags along a reluctant and conflicted Brutus. I wonder if the writers have read Thornton Wilder's The Ides of March, which introduced the idea of circulated letters in connection with the conspiracy against Caesar, since as far as I remember it's not historical. Servilia guilts him into joining their cause.

Now we come to the scene which finally made OldHousemate(theRomeone) and I not only stop caring about Dodgey, but hope that really really bad things happened to him really soon. He frees Eirene, but when he finds out that she wants to marry someone else, he goes mad and kills the poor boy (who is not his slave and therefore this is a crime against Boring, as he's damaged his property). He uses Paris Hilton from Spartacus' particularly violent method of spontaneous murder, smashing the guy's face in, which confirms the influence of Rome on Spartacus. Boring quite sensibly points out that if you free someone you can't expect them to just fall for you and the whole thing is especially daft given that, pre-murder, Eirene was obviously reasonably fond of Dodgey, begging him not to sell her to someone else, so if he'd been patient and nicer he might have had a chance anyway. Dodgey complains about his hard life, which Boring quite correctly feels is no excuse for bashing people's heads in, and Boring kicks him out (and, hopefully, is going to care for Eirene, currently beong comforted by Niobe - otherwise she's now out of a job with no one to support her).

I'm afraid I really can't understand what the makers were thinking here. Why on earth should I take an interest in such an abhorrent character, other than to see him swiftly punished, preferably in a very nasty way? This is where Spartacus has the edge. There's no suggestion there that we should sympathise with Paris Hilton or any of the other similarly badly behaved characters. We watch in anticipation of their eventual dowanfall - they are the villains. Dodgey is supposed to be one of the protagonists. Though in fairness, I should say that I have no interest in 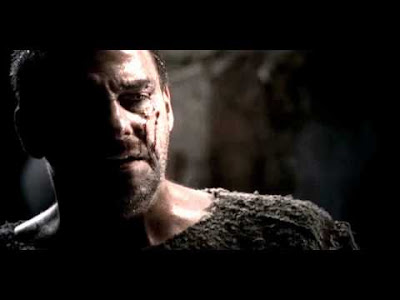 works where the protagonist/antagonist is a dislikeable character, like American Psycho or even Vanity Fair, so this is really an issue of personal taste.

Dodgey is very sorry. Cuts no ice with me, I'm afraid.
Atia tries to be motherly to Octavia, and some friend of the Gaul retrieves his body and gives him a proper Gaulish funeral. Dodgey gets an offer of employment from a shifty geezer, and I couldn't care less what happens to him.

An odd episode, loosely structured around Caesar's Triumph but mostly advancing disparate plot threads in various ways. The most successful parts of the episode are those which foreshadow Caesar's death, particularly his words near the opening and Cassius' knowing smile. If the episode has an overall theme, it must be the misery of war and the futility of military triumph, as Dodgey becomes a murderer (despite his protestations to the contrary) and the Gaul has his honour returned to him after his humiliating death. Essentially, everyone seems a bit lost without a war to fight. This cannot be healthy and you just know it will all end in tears.
Roman history Rome TV