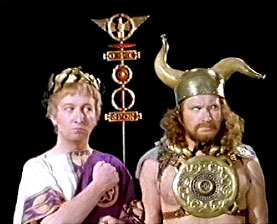 You might think it's a bad sign when an episode starts with the one thing your teacher always told you not to do in English class in primary school. The opening minute or so of this episode resolves the cliffhanger from the end of the previous episode, in which Badvok had his head chopped off, by demonstrating that it was all a dream of Grasientus'. It's the most awful cop-out and, more importantly, not remotely funny,

This episode revolves around a drought, which Aulus fears is the result of his sacrificing a carrot rather than an ox to Apollo some years previously. The gods usually take their revenge a bit quicker than that in ancient literature, but Aulus is desperate after all. Given that this is about a weather problem in Britain, the humour has much more to do with a British view of ourselves and our climate than ancient Rome, along with the obligatory jokes about how much the Mediterranean-raised Romans dislike our climate.

It's all more than worth it for the Britons' rain dance, complete with jazz hands. I'm not aware the ancient Druids had rain dances (insert hardly-any-need-for-them-in-Britain joke here) but who cares, it's hilarious. The apparently more successful haka-like rain dance Aulus accidentally discovers at the episode's end is less funny, but I think his architect was the one who hit on the real solution - he ensured it would rain immediately by declaring that day to be a Bank Holiday.
Chelmsford 123 Roman history TV