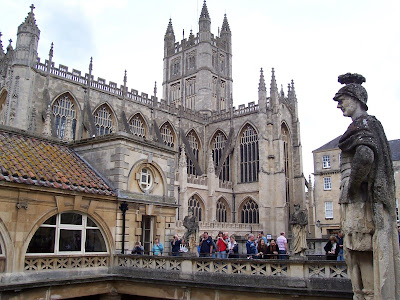 The news had an item today about how Lonely Planet apparently gave Britain in general a bit of a pasting in its most recent Guide. The good news is, two places close to my heart seem to have come out of it rather well - Birmingham, where I've lived for more years in total than anywhere else in the country, and Bath (left), home of Britain's best preserved Roman remains.

Britain was one of the furthest flung posts of the Roman Empire, and our Roman remains are, shall we say, not always that impressive. (I'm talking about England and Wales here, of course, since the Romans didn't get to Ireland - Northern or otherwise - or Scotland). There's a reason that Blackadder's Roman incarnation wondered why they were trying to keep the Picts out of the Empire by building a three-foot high wall. I'm not sure exactly what the problem was - presumably a combination of climate and looting by Anglo-Saxons and Vikings, who took the Roman bricks and stone to make their own buildings - but very few Roman ruins in this country come up any higher than ankle level. 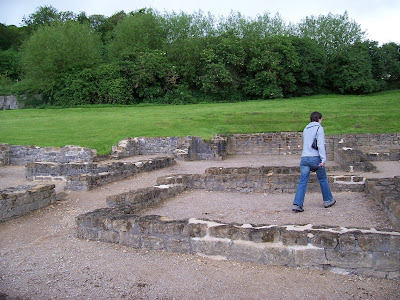 Roman villa near Gloucester, with CurrentHousemate walking away from the camera! 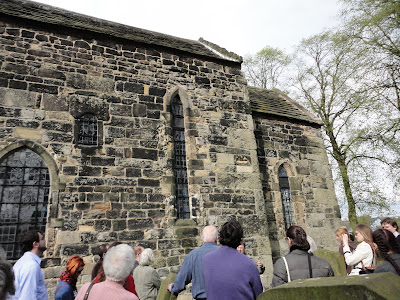 Saxon church in Escomb, near Durham, built partly with Roman bricks and stone, identifiable by the diamond-pattern markings on them (viewed on an excrusion during this year's Classical Association conference).
In some places, there are reasonably impressive remains underground, which are dug up and then covered up with a somewhat dingy-looking corrugated iron hut thing. 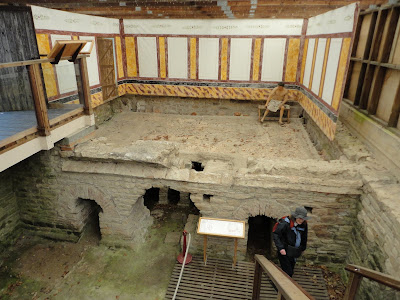 Interior of the best-preserved section of a Roman fort near Durham, also part of the CA conference excursion, with Claudius the plastic Roman in the top right hand corner 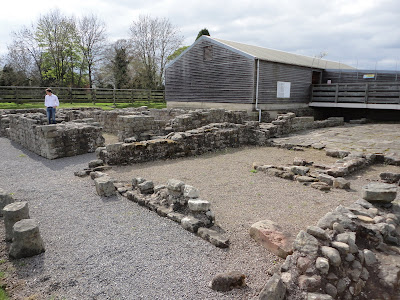 The exterior of this section of the fort, under this time wooden hut-thing, surrounded by less well-preserved sections
This is quite good though - follow a sign for a 'Roman mine' in North Wales and you'll never find it, though you'll probably get a very nice walk in the process and will almost certainly see some sheep. 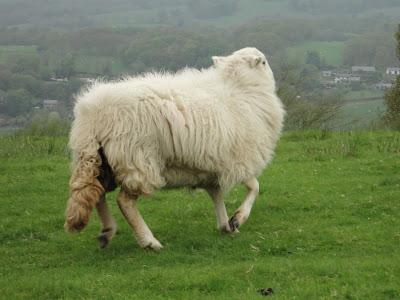 We do have one spectacularly well-preserved set of Roman remains - the baths at Bath (so impressive we named the town after them). These are much better preserved, and although this preservation is due largely due to lots of later additions (especially Georgian, I believe) it makes the Baths that much more impressive to look at and they are the highlight of our Roman archaeological sites (along with Caerleon, which I haven't seen because I couldn't afford to go to the CA conference that year). 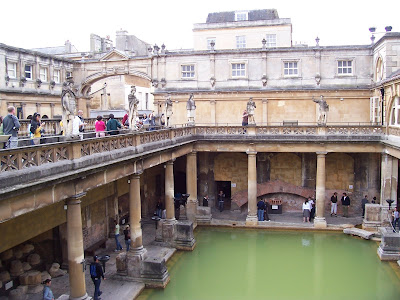 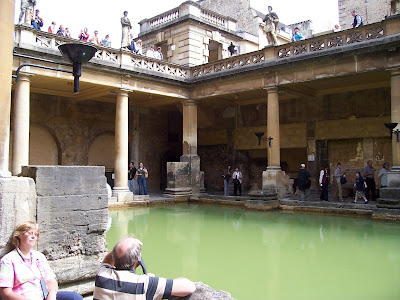 You're not allowed to dip your fingers in the water at the baths at Bath, so naturally, OldHousemate(theRomeone) and I did no such thing. Ahem.
With these being far and away our most visually impressive Roman remains, it's not surprising that if Roman Britain is required, programme-makers will try to get them in there - though few go to the lengths of Bonekickers, which kept Boudicca alive far longer than history did and in a different part of the country, just so that they could set their episode about Boudicca at the Baths, conveniently located near where they were filming at BBC Bristol. 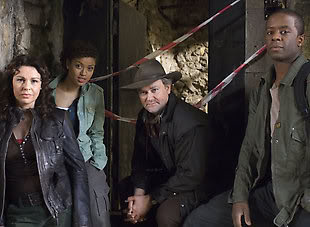 I couldn't find a picture of them in the Baths specifically, because all the photos relating to this particular episode were from... my own blog. No one else is interested in Bonekickers. I don't blame them.
Most pop culture representations of Britain, however, don't bother with real Roman ruins, they just build sets and set stories in Londinium (London) or Camulodunum (Colchester), the major urban centres of Roman Britain. (Colchester has an excellent museum with Roman section, which I haven't been to since I was 10 years old, but it was very good). Just lately, they all seem obsessed with the probably-fictitious disappearance of the Ninth Legion north of Hadrian's Wall, in dark, wet, atmospheric Scotland (see Centurion, The Last Legion, The Eagle etc.). 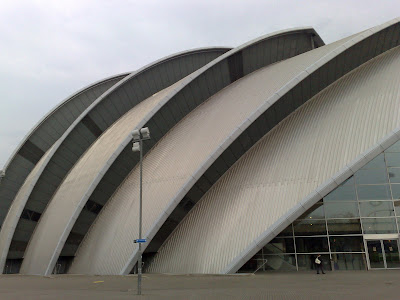 This was the only picture of Scotland I could find on my computer (it's in Glasgow and when I was little I thought this actually was Sydney Opera House). Just pretend it's a dark, damp, atmospheric forest.
As you can tell from the pictures, the British climate is not quite like the Roman/Italian one and this is usually a major theme in depictions of Roman Britain. Every Roman who is ever sent to Britain, whether it's Kenneth Williams' Caesar, Lindsey Davis' Falco, a character from Chelmsford 123, or even Blackadder, will complain about how cold and wet it is. To be fair, they have a point (hence the mass exodus from Britain to the Mediterranean every summer) though for the record, I do have a friend from Texas who actually likes the climate here. It's not that terrible... really... 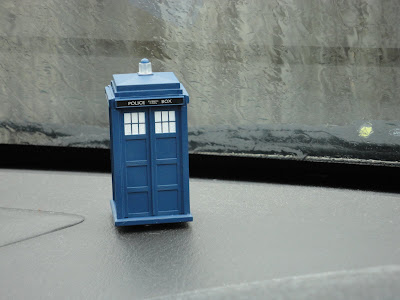 My birthday present from CurrentHousemate this year - note pouring rain in the background
As this picture reminds us, the most interesting use of the British landscape in a Roman-set story recently was last year's two-part Doctor Who finale, 'The Pandorica Opens'/'The Big Bang'. Rather than go hunting for some decent Roman remains and trying to build an episode around them, Steven Moffat took the whole thing even further - he simply went for the most impressive historical monument we have in this country and built an episode around that, on the quite sensible grounds that it was already there during the Roman period, so there was no reason not to go there with Romans. 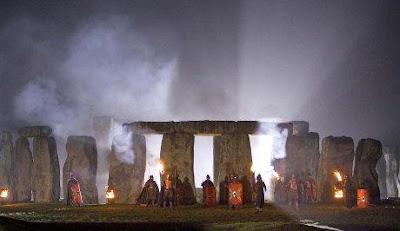 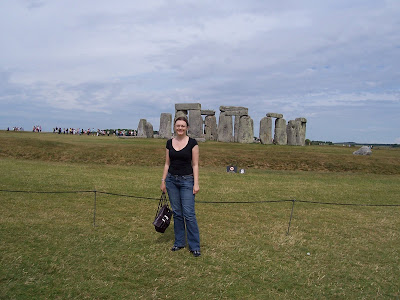 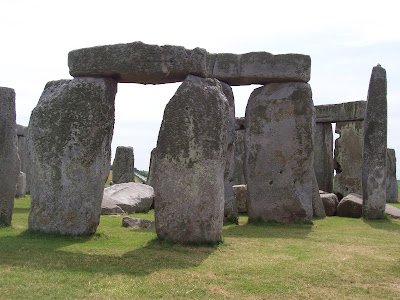 I love this double layering of history, like the ruined Roman villa in Britain where the lovers meet in the 2006 film version of Tristan and Isolde. And it's certainly a nice way to mix two of
the major elements of pre-1066 British history together.

All in all, Britain doesn't do that badly as far 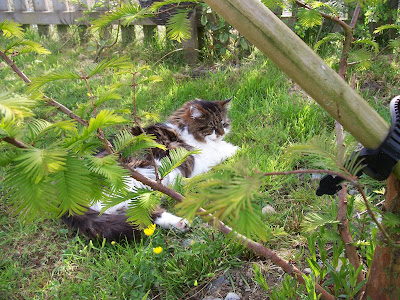 as pop culture Romans go, though in defense of my country, I would like to point out that the sun does shine here sometimes. Just not very often.