Star Trek The Next Generation: Darmok 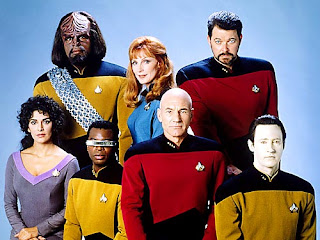 In the course of researching an article for Den of Geek on 10 ground-breaking episodes of The Next Generation, my lovely Facebook friends pointed me in the direction of 'Darmok,' which turned out to be rather fascinating.

The basic premise of 'Darmok' is that Picard is stuck on a planet with an alien whose language cannot be translated by the universal translator. It's a rather nice idea, forcing Picard to struggle to understand an alien race and to think about how we as sentient beings communicate, rather than just saying hello and having the universal translators do all the hard work.

In the end, it turns out that the alien's language is entirely composed of imagery and metaphor - the example given in the episode is that it's like saying 'Juliet on her balcony' when you mean that someone is in love. The universal translators can't translate it because they're not programmed with the required stories.

Now of course, there are all sorts of problems with this. For one thing, how did they develop sufficiently complex stories to account for any situation? I supposed they could be relying on visual art, but it's a bit of a stretch. For another, the universal translators seen able to cope with everything in the language that isn't a proper noun, which is cheating really. And although I had the advantage of knowing the set-up beforehand, I still think Picard was a bit daft to think someone was trying to attack him when they offered him a knife hilt-first.

But however unfeasible it is, the idea of a language built on metaphor and imagery is really interesting. Back in the 19th century, philologist Friedrich Max Müller suggested that mythology was a 'disease of language' - he thought that myths grew out of flowery ways of describing the natural world (usually the sun - where Freud was obsessed with sex, Max Müller was obsessed with the sun). So, according to Max Müller, the myth of Eos (Dawn) and Cephalus (literally 'head,' which Max Müller twisted around until he made it mean 'dew') is actually a poetic way of describing the dawn 'kissing' the dew on the ground as it rises in the morning. No one has really agreed with Max Müller's theory for about 150 years, but he would have loved this episode.

Max Müller would also, as a scholar of the East, have loved Picard's re-telling of parts of the Epic of Gilgamesh. The Epic of Gilgamesh is the oldest surviving work of literature in the Middle-Eastern-and-Western world, and one of the oldest works of literature in the world all together. It survives in various bits and pieces of different versions, but a standard version exists and is available in translation from Penguin (if memory serves, there's an older prose translation - that's the one I've got - and a newer verse translation). It's much, much (MUCH) shorter than any of the Greek or Latin epics and, apart from some slightly repetitive sections (a common feature in ancient Near Eastern literature) it's a pretty good read, so I'd recommend having a look if you're interested in epic poetry.

The standard version of the Epic of Gilgamesh isn't quite the same as the story Picard tells here but it's close enough, and he gets the most important part right - the friendship between Gilgamesh and Enkidu, and Enkidu's death. Gilgamesh and Enkidu fight each other at first, but then become inseparable and like family, and then Enkidu dies and Gilgamesh mourns him. It's a perfect story for Picard's situation, and it's nice to hear it told, as it isn't used in popular culture as much as the later Greek and Roman stories.

At the end of the episode, Picard is apparently reading the Homeric Hymns. I say 'apparently' because Riker seems to recognise what he's reading as Greek, but it doesn't look like Greek, and why is he reading a book instead of a PADD anyway? I'm pretty sure you can already get ancient Greek texts on a Kindle... I'm also baffled as to why Picard has decided to start with the Homeric Hymns, instead of the Iliad or the Odyssey. Maybe he liked that they're shorter. He calls them 'the root metaphors of our own culture' - Max Müller must be jumping for joy in the afterlife. 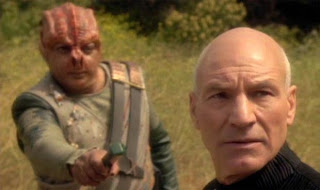 I liked this episode a lot, despite the logical flaws. The basic story is simple and sweet (I cried) and it's always nice to see a shout-out to the Epic of Gilgamesh. I don't know whether the writers had ever heard of Friedrich Max Müller but this must be one of the first outings for his theory in about a century, so that's nice. And I've never before seen anyone so excited as Picard is here by the word 'metaphor'...