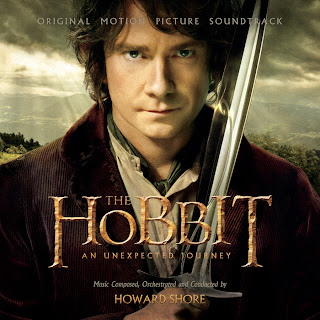 OK, there's nothing Classical in The Hobbit. It's Christmas, I don't care!

There are some spoilers near the bottom for the next couple of films, so if you don't want to read on the short version is - I loved it.

I did have one Classics-related thought during the film (I'm always on duty!). During one of the Radagast scenes, he said something about 'witchcraft' and, to the eternal shame of my inner feminist, for a moment I thought, 'huh? I don't remember a witch in this story. What's that about? Is this a new storyline?' Of course, it wasn't, it was a reference to the Witch-King of Angmar, aka the head of the Black riders, and to his buddy the Necromancer, since necromancy is a form of witchcraft. I had become so conditioned to the idea that witches are women that, despite my familiarity with both Tolkien's world and non-gender-specific witchcraft, my brain did a little double take for a moment.

Part of the reason for that sexist instinctive response is that modern fantasy often assumes that a 'witch' is a woman, whereas a 'wizard' is a man (whether or not witches are bad and wizards good, as is sometimes the case).  Occasionally the word 'warlock' is used for a male witch, as in Merlin; sometimes 'witch' and 'wizard' are the male and female versions of the same thing, as in Harry Potter, and sometimes magically-inclined women are 'witches' and magically-inclined men are 'wizards,' with the two being slightly different things, as in the Discworld series. (Good old True Blood has male witches, but I can't think of any other examples off the top of my head).

This idea that witches are women presumably dates back to the early modern witch-hunts in Europe and America, in which the witches/victims were predominantly women. This isn't my area, so I'm not sure exactly how that came to be the case, but somewhere in the mess of mean-ness and paranoia, witchcraft became thought of as a female thing. (I remember a friend of mine telling me once that young women who accused older women of witchcraft were often hurling themselves down stairs etc in an attempt to get rid of an unwanted pregnancy - perhaps the older women were midwives/abortionists? Or it might be something to do with the association of witchcraft with the Devil, the Devil with sexual naughtiness, and sexual naughtiness with women? I'll be honest, I really have no idea!).

The point is, as JRR Tolkien was well aware, witchcraft is not always - perhaps not even usually - associated with women. (His good friend CS Lewis would have been equally aware of this, but chose to ignore it). The people we call 'witch-doctors' (probably something of a misunderstanding of what they do, but still) are usually men. I'm sure there are plenty of cultures around the world where 'witchcraft' is non-gender-specific or even male-dominated. And, in the Classical world, witchcraft could be associated with men or women.

It has to be said, even in Greece and Rome, the stereotypical witch was, just as it is now, an ugly old woman. Erictho, the witch and necromancer in Lucan's poem the Civil War, who lives in graveyards and steals the nails used to pin crucifixion victims to their crosses, is a particularly memorable example of this trope. But there are also occasional characters who tend to be translated as magicians in English who are probably Classical witches, and in real life, anyone could be accused of witchcraft. One of my favourite Classical authors, Apuleius, was accused of witchcraft and had to defend himself in court - though it's worth noting that, when he wrote a witch into his novel Metamorphoses, he wrote her as a woman.

All in all, there's no reason we should think of witches as women, but we often do - which makes it doubly surprising that it's Tolkien who reminds us that witches can be men too. After all, Eowyn aside, he's not exactly known for his feminist credentials. In fact, the novel The Hobbit has not a single speaking female character (the Sackville-Bagginses are a homogenous group - Lobelia appears in The Lord of the Rings). Belladonna Took is fondly remembered at the start, and that's it. Bad Tolkien. You shall not have a cookie.

This means, of course, that one of the big advantages of the padding out of the film with other Tolkien material is that Galadriel appears, so there is a woman in it! (I should add, I have no problem with World War One stories with no women in them or anything like that, but fantasy and science fiction with no women rubs me up the wrong way). I really liked the scene between Gandalf, Elrond, Galadriel and Saruman; although tonally a shift from the rest of the film, it provided some nice context, and will be very necessary to explaining why Gandalf abandons our heroes to make their way through Mirkwood alone later in the story. I liked the flashbacks to Thorin's history too - I was always confused by a lot of the backstory as a child (beyond, obviously, 'dragon attacks, takes over mountain.' I could manage that). I'm hoping the Battle of the Five Armies, and the whole business with the Arkenstone, will actually make some kind of sense when the movies get to them, as I've never managed to follow them before!

Overall, I loved the film. I had a big stupid grin on my face from the first 'bing!' of the Star Trek preview (and my goodness that looks amazing!) right through to the credits. Yes, the film is too long - it could have lost a good half hour, mostly from the beginning and a little bit from the end. I like Tolkien's funny little songs, but we really didn't need to see the dwarves do the dishes. There were also some rather OTT action sequences; I was constantly reminded of computer game Fable 2's assertion that a Hero can survive a fall that would break all the bones of most people.

But overall, I loved it. The beautiful, deep, serious dwarf song sent chills down my spine (that bit I wanted to be longer!) and of course, the whole scene with Gollum in the cave was fantastic. Martin Freeman is the perfect Bilbo and both Kili and Thorin Oakenshield are really hot. FUTURE MOVIE SPOILER ALERT - I did notice that, with the exception of James Nesbitt's Bofur, the dwarves who were given some personality were the ones who are... going to die. Just to make sure we really care about them before they snuff it. Very sensible, very logical, but a bit obvious to those of us in the know! 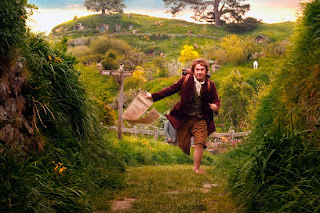 I'm still not 100% convinced by the decision to make three films out of The Hobbit and some bits of appendices and The Silmarillion, especially since this film could so easily have been substantially shorter, but overall it's looking reasonably good. I suspect it all hangs on the next film, in which Bilbo and the dwarves travel through Mirkwood (and hopefully bump into Legolas) and Gandalf goes off to fight the Necromancer. We see none of Gandalf's struggle with this mysterious figure in The Hobbit, but presumably we'll see lots of it in the film, and on the basis of this first installment, I can't wait!