Was Cleopatra beautiful and should we care? 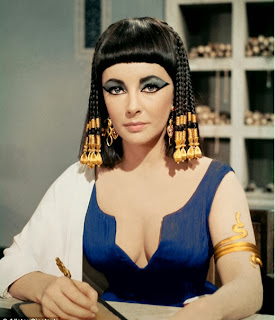 I got into an interesting discussion on Twitter earlier which I thought I'd mention here rather than trying to work through complex issues in 140 characters or less!

Earlier today, I re-tweeted a link to an article from Heritage Daily on whether or not Cleopatra was beautiful. In response, I was asked 'But why is it relevant if she was beautiful or not?' We don't talk about whether or not Caesar and Mark Antony were incredibly handsome, so why are we talking about Cleopatra's looks? The whole thing is sexist because 'the beauty question is irrelevant.' (You can see some of the conversation here, if I've embedded the tweet correctly!)

On the one hand, yes, if what we are interested in is analysing and examining Cleopatra's role as a politician, her beauty (or lack thereof) is, indeed, largely irrelevant and focusing on it without mentioning Caesar and Antony's looks is sexist. I still think it's not quite as cut and dried as all that, since she cemented her political alliance with both of them by having a sexual relationship with both, plus according to Octavian's propaganda, Antony was madly in love with her - much as beauty is in the eye of the beholder and looks aren't everything, sexual attraction and romantic love are at least a little connected to looks. Plutarch tells us that what attracted Antony to Cleopatra romantically was her wit and intelligence and personality rather than her looks and I think that's genuinely interesting. But it is true that to focus on her looks but not on Caesar's or Antony's smacks of sexism.

That's not why the issue of Cleopatra's looks interests me, though. What interests me is the development of the tradition that she was beautiful. Cleopatra, in popular culture, is a stunner - she's Theda Bara, she's Claudette Colbert, she's Elizabeth Taylor (though Taylor's Cleopatra is political as well as beautiful). I, Claudius' Livia makes a reference to how she and one other 'in Egypt' were the most beautiful women in the world. In the popular imagination, Cleopatra is an exotic, sexual seductress, and beauty is a part of that.

However, like Caligula and Incitatus-as-consul, the ancient basis for this particular tradition is slim. (Suetonius, the old gossip, says Caligula thought about making Incitatus the horse consul - and now nearly every depiction of Caligula features a horse in the senate). In addition to Plutarch (who lived decades later) we have coins minted by Cleopatra and Antony that show her with fairly pointed features, a nice-looking woman but not stunningly beautiful. The tradition is, as far as we know, inaccurate.

The root of this tradition, presumably, lies in the idea that for Cleopatra to have ensnared both Caesar and Mark Antony, she must have been gorgeous. In a line of reasoning that is equally unfair to men and women, it has presumably been assumed that Caesar and Mark Antony had their otherwise politically savvy heads turned by a beautiful woman (because men only want one thing and only value women for their looks), and for this to happen, Cleopatra must have been gorgeous (because women are only capable of swaying men using sex, not through their intelligence or political ideas). The reason I think the whole issue is interesting is precisely because we need to overturn this sort of sexist thinking. The popular view of Cleopatra, dominated by movies in which, of course, producers want to cast the most beautiful actress they can find, is of a woman who used her beauty to distract and detain two powerful men. The reality is much more complicated and more interesting - Cleopatra had political alliances with both men and she attracted them with her brains, not her beauty. I think the formation of the tradition, however sexist, is interesting, and I think the way to combat that sexism is to address the issue, look at the evidence, and ask whether the tradition conflicts with the ancient evidence and if so, why?

What do you think? Am I being sexist to think Cleopatra's beauty (or otherwise) is interesting?