Top 5 representations of ancient Athens in film and TV 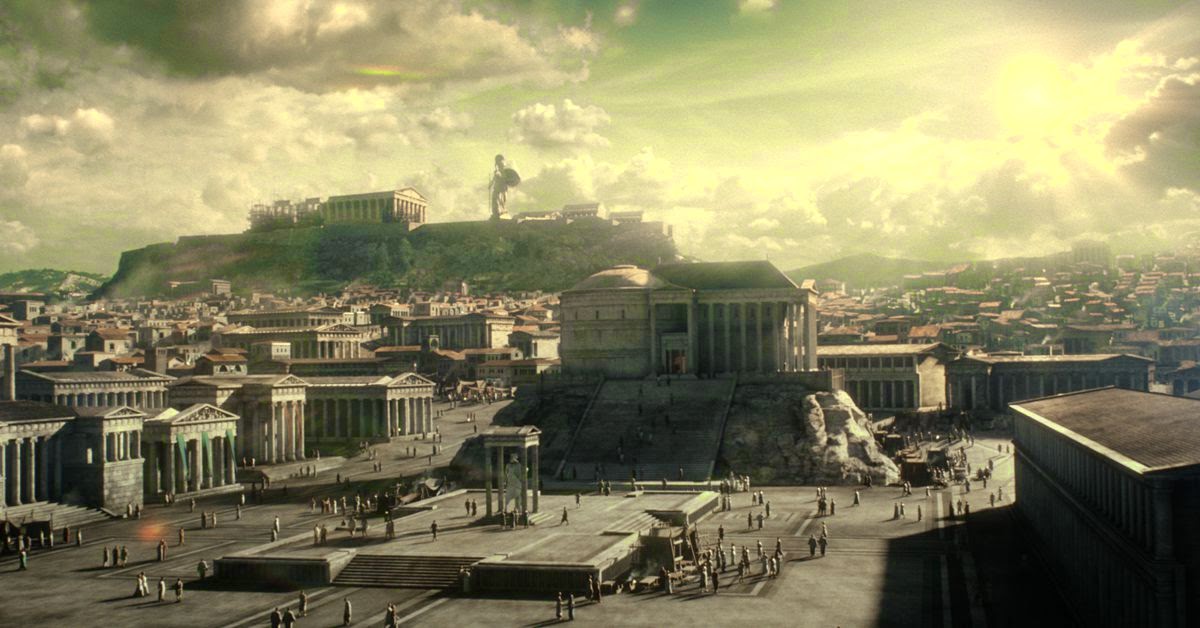 Athens is the most famous city-state in ancient Greece. The majority of our textual evidence from the Classical period comes from Athens. It was the home of Plato, Sophocles and Thucydides, the birthplace of democracy and philosophy, one of the two states that led a Greek coalition to victory in the Persian Wars. If asked to picture 'ancient Greece' in your mind, chances are the image behind your eyes is that of the Parthenon, the Athenians' beautiful temple to Athena, sitting on top of the Acropolis (the rock it's on) standing guard over the city.

Modern Athens shows up every now and again. Nia Vardalos' 2009 romantic comedy My Life in Ruins was the first American film to get permission to film at the Acropolis and Athens will feature in upcoming Patricia Highsmith adaptation The Two Faces of January. Michael Palin stopped off to visit the fabulous soldiers with the furry shoes in Around the World in Eighty Days and I'm sure it's featured in a host of travel shows - and there have probably been many documentaries about ancient Athens as well.

But when it comes to fictional representations of ancient Athens, the city is bizarrely poorly served. Partly, this is down to film-makers' fondness for making films about Roman history, but Greek mythology. Athens is the most famous and most important city in historical ancient Greece, but it doesn't show up quite so often in myth, and when it does the story in question may be too dull and sexist to want to film (Eumenides) or it's about a hero from Athens who goes elsewhere to perform his heroics - Theseus is Athens' great hero, but he tends to perform his heroics in Crete, the underworld and so on. (I have not yet forced myself to sit through Immortals, but the Wikipedia page doesn't suggest Athens itself shows up).

And yet, even the few films in which you might expect to see Athens don't always show it. The 300 Spartans features the Athenians in a substantial role, but they meet in Corinth. Michael Hoffman's 1999 film adaptation of A Midsummer Night's Dream (which is set in ancient Athens) shifts the action to 'Monte Athena' in Italy. Disney's Hercules sort-of-probably includes Athens; the biggest temple in ancient Greece (not actually finished until the Roman period) housing the biggest cult statue was the Temple of Olympian Zeus in Athens, so that's probably where Hercules goes to talk to Zeus at the beginning, and the background during Meg's song 'I Won't Say I'm In Love' looks a bit like the Parthenon. However, Thebes steals all the limelight, location-wise, with Athens fading into the background.

We can only assume that, since all film-makers know about Athens is that it has that pretty temple in the middle of it, they never think to set anything there. They want to go to the underworld, to magical islands or Trojan battlefields; or they want to show hordes of angry Spartans running around without enough clothes on. If possible, they want to incorporate something Roman where it doesn't belong, because it's really not an ancient world film without a gladiator fight, chariot race or incestuous emperor. Still every now and again ancient Athens does manage to squeeze its way into a film or TV show - here are five of the best examples.

5. Aladdin
During 'A Whole New World', Aladdin and Jasmine fly on Carpet all over the world, taking in medieval Arabia, ancient Egypt and China at an undisclosed period (evidently, it also travels in time, which might help explain how they've survived travelling that fast on an open vehicle). As the song ends, they snuggle together while floating on a lake below a Greek temple on a hill.
Do we see the Parthenon? Yes, OK, this isn't necessarily the Parthenon - it's a temple on a hill and the city of Athens is distinct by its absence. It's not even a rock like the Acropolis, it's green and grassy. But if Carpet is taking them on a whistlestop tour through space and time, you'd assume it's Athens and the Parthenon. The garden district of Athens...
Is it historically accurate? No (see above re: time travel, lack of city).
Anything blatantly Roman shoved in? No, though it does appear to co-exist with the much earlier construction of the Sphinx in Egypt.
Top Athenian moment: Well, all of it really, it only lasts a few seconds.

4. Xena Warrior Princess: Athens City Academy of the Performing Bards
Gabrielle joins the Athenian City Academy of the Performing Bards, a sort of ancient version of an American college, where she hopes to study story-telling.
Do we see the Parthenon? No, it's too set-bound for that.
Is it historically accurate? Not even slightly. It's Xena. It would be quicker to list the parts that are accurate (there was an Athenian called Euripides, who liked story-telling).
Anything blatantly Roman shoved in? The entire story of Spartacus.
Top Athenian moment: Ancient Athenian drama re-told well-known myths and very occasionally historical stories to an audience who knew broadly what to expect, but were looking for new twists or especially moving versions of old stories. The episode's use of clips from Stanley Kubrick's Spartacus to illustrate a story told by one of the bards may not fit in a factual sense, but it gets across the idea of re-telling classic stories, though Jason and the Argonauts would have seemed a more logical choice. 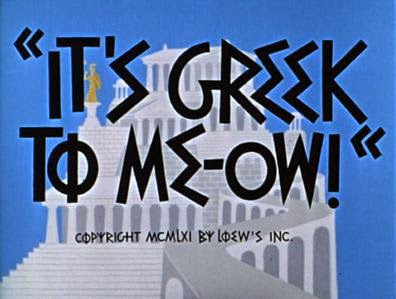 3. Tom and Jerry: It's Greek To Me-ow!
Tom lives behind the Parthenon; Jerry lives inside it. Tom wants to eat Jerry.
Do we see the Parthenon? Yes, and the Acropolis is shown covered in buildings, rather than being a bare hill or rock, which is how other animations tend to depict it. They're not necessarily accurately drawn, but points for effort.The opening, comparing the fancy front part of the Acropolis to the poorer rear view, is brilliant (it has a very A Funny Thing Happened on the Way to the Forum feel, but the cartoon predates both the stage musical and the film version).
Is it historically accurate? I'm sure there were cats and mice in ancient Athens (still are) - it's more physically implausible than historically implausible.
Anything blatantly Roman shoved in? On the other hand, there's a Roman chariot in there and Jerry is reclining and eating grapes like a pop-culture Roman. Everyone also wears laurel wreaths all the time, which is Greek, but they were prizes, not everyday fashion.
Top Athenian moment: As Tom slides down a pillar desperately scrabbling at it with his claws, he transforms it from a plain column to a Corinthian column, with leaf design at the top and fluting. There aren't any Corinthian columns on the Parthenon (it's Doric) but who cares.

2. 300: Rise of an Empire
As Xerxes continues his invasion of Greece after the end of 300, he burns Athens in dramatic style.
Do we see the Parthenon? Yes. Burning. Which we shouldn't because it wasn't built for another few decades.
Is it historically accurate? Sort of. Xerxes did burn Athens, but the Parthenon and other current famous buildings on the Acropolis hadn't been built yet. Athens has developed Colosseum-syndrome - period is irrelevant, as long as the most famous buildings are in there. The whole significance of the 'wooden walls' prophecy is also completely omitted, which baffles me.
Anything blatantly Roman shoved in? Thankfully, no. Roman tropes are unnecessary when you have horses that can jump across burning boats and into fire, and Xerxes takes over crazy-leader duties.
Top Athenian moment: Earlier in the film, before the burning, we see an Athenian assembly meeting degenerating into a brawl - I have a sneaking suspicion that's not entirely off the mark. 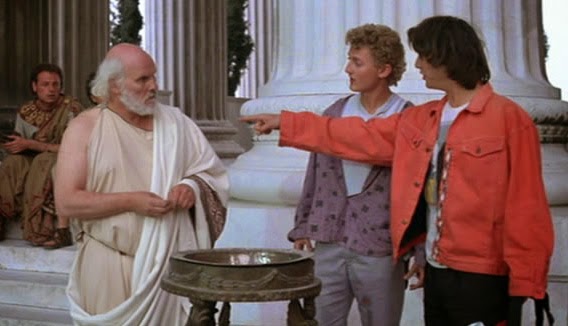 1. Bill and Ted's Excellent Adventure
Travelling through time on a mission to pass their History project, Bill and Ted stop off in ancient Athens to pick up Socrates. Pronounced So - crates.
Do we see the Parthenon? No, the establishing shots are of statues rather than a wide shot (probably because, in the days before ubiquitous CGI, a wide effects shot would have been too expensive).
Is it historically accurate? Yes! There is nothing that is not accurate about this depiction of Socrates standing in the Stoa (a colonnade) in Athens, expounding his philosophical Thoughts to an attentive audience. Apart from the bit where two American teenagers turn up and take him away in a magical time-travelling phone booth. Socrates is even speaking Greek.
Anything blatantly Roman shoved in? No. This is far and away the most accurate depiction of ancient Athens I have yet seen on film or television. Think about that for a moment, film and television makers.
Top Athenian moment: "All we are is dust in the wind, dude".

Honourable mention: If we assume the temple in Hercules is indeed the Temple of Olympian Zeus in Athens, it's very impressive.