The Eagle of the Ninth: Esca 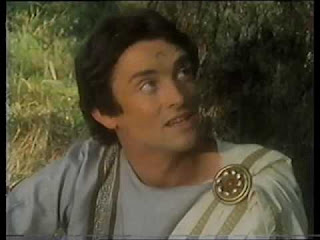 Having covered Marcus Aquila's arrival in Britain in the first episode, it is this second episode that really sets up the characters we'll be following through the rest of the story as our hero meets and buys a British slave called Esca.

Both the book and the TV series cover Marcus' relationship with another Briton, before Esca, in detail. He first meets and befriends Caradoc, and goes hunting with him. However, Caradoc conspires with other British to attack the fort and the ensuing battle, in which Caradoc is killed, is when Marcus received his career-ending injury. The film touched on this, but the television series is able to devote the whole of the first half-hour episode to it, making it a separate point in itself. When Marcus meets Esca, therefore, he has much more reason to be wary of making friends with any Briton, and to worry about how their loyalty to other Britons may conflict with friendship with him. The series also drives the point home with flashbacks of Caradoc, just to make sure no one has missed the point, so there is much more tension between Marcus and Esca on both sides here.

Esca has a Northern English regional accent. The lack of RP, in the 1970s, presents him as lower class (at that time, newsreaders and other television personalities all used RP). His geographical origins are, of course, important to the story.

The series also includes Marcus' love interest, who was left out of the film to focus on the relationship between Marcus and Esca. Unsurprisingly, she looks a lot older than 13, as she is in the book! That would be creepy. Camilla/Cottia is from the Iceni tribe and has reddish hair, because heaven forbid we should get through a story set in Roman Britain without a reference to Boudicca! Unlike the other British characters, Cottia has an RP accent though, presumably to emphasise the Roman upbringing she is getting from her Roman aunt and uncle.

We get to see some gladiatorial combat in this episode, and the set for the small provincial amphitheatre is fairly impressive. All of our heroes, while not necessarily against blood sport in humans, are against animal cruelty, as modern literary Romans nearly always are. Audiences can accept that these people of a different time are okay with humans fighting and killing each other, but not that they are okay with animal cruelty. This is why the dog never dies in action movies.

The series continues to make good use of its budget in several ways. I'm impressed with the full on pool in the bathhouse (with everyone wearing shorts because child audience!). The apparently mechanical wolf in one scene is a bit distracting though.

This is still essentially set-up, as the episode is entirely devoted to introducing the audience to Esca and Camilla/Cottia. To a generation raised on Classic Doctor Who, this would have been entirely normal. Six-part Classic Doctor Who stories often spent two episodes introducing new places and characters and wandering around a bit, and even the four-part stories are sometimes half set-up, half pay-off. How well this would go down with a generation raised on 45-minute stories is hard to say! On the plus side, it gives the setting and characters room to breathe, and we have time to get to know them - and it replicates the structure of the book, which also spends a long time establishing the relationships between Marcus, Esca and Cottia before the journey that forms the bulk of the plot. On the down side, we're an hour in and the story hasn't actually started yet...