The Roman Quests: Death in the Arena, by Caroline Lawrence 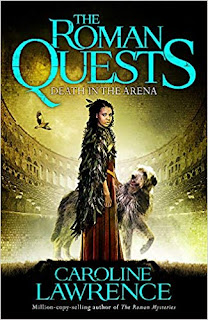 I've got a little behind on my blogging of this series - I've actually already published an academic paper talking a little bit about this book, months ago! (It's on 'Fantastical History: Dreams in The Roman Mysteries' and is freely available open access from the Journal of Historical Fictions, Vol. 2.1). But hey ho what can you do, life gets in the way - better late than never!

Years ago in 2011, before The Roman Quests were written, I interviewed author Caroline Lawrence for this blog, and I asked her what happened to poor little Popo, Jonathan's nephew who disappeared. He had been kidnapped by his wet nurse and taken to Britannia - and in the previous book in this series, The Archers of Isca, we finally met him again, living as a British youth called Raven. This book is where the really satisfying resolution to this story is reached though, because it's in this book that Jonathan is finally reunited with both twins (not to mention Lupus, who features in much of the book). Much as I like the newer characters, my heart will always belong to the first four of Flavia, Nubia, Jonathan, and Lupus, so this is the point where I finally feel, all these years later, that the story has been resolved!

Although the books are told from several different points of view, the primary protagonist in this volume is Ursula, a character who is very similar to Nubia from The Roman Mysteries, but a bit louder and more confident (partly due to being raised as a well loved rich girl rather than kidnapped and sold into slavery). Ursula's story here is a conversion story, as she moves from Druid religion, through her ancestral Venus worship, to becoming a Christian by the end of the book. Much of the plot revolves around religious intolerance and the uncertain place of early Christianity in the Roman world, and young readers may be interested to see Jews and Christians confused and Christians referred to as 'atheists', because they don't believe in the many gods of the Roman world.

I especially liked the sequence where one Christian repented at the last minute and agreed to worship the Emperor Domitian. A previous scene had shown a Christian who stood firm and was killed in the arena, so the brave early Christian martyrs were represented. Ursula also has a prophetic dream that's very similar to that recorded by St Perpetua shortly before she was also martyred and torn to death by beasts in the arena. However, I have always thought that many early Christians - perhaps even a quiet majority? - must have simply worshipped the Emperor's statue when commanded to, from fear, or doubt, or simple self-preservation. I liked that the story considered that aspect of religious persecution as well - though the main characters are clearly unimpressed.

One of the things I talked about in my article was that this book is also the closest to fantasy of any of the Roman Mysteries or Roman Quests. Ursula has a set of experiences that can be interpreted several different ways - while with the Druids, she interprets them as magical experiences; Jonathan interprets them in a religious light, suggesting Ursula has been possessed by dark spirits, and modern readers can interpret them as hallucinations and visions brought on by taking drugs (drinking potion made from mushrooms and mistletoe, which is clearly condemned in the text by Jonathan on the grounds that mushrooms are 'tricky' and mistletoe is poisonous). There are a few things that are hard to explain within the story - whether the reader sees them as religious experiences or coincidences is up to them.

As the title suggests, much of the action takes place in the arena, but in fact there is not too much to scar young minds for life here. There were moments were some of this story reminded me a little bit of The Hunger Games, but this is a little less horrific in content than that series, and could be read by slightly younger/more sensitive children. (For a horrible moment, I thought Caroline had killed the dog again, but thankfully not!). The tour of Romano-British sites is great fun and may, hopefully, encourage children and their families to visit any sites that might be nearby, as it covers a lot of the country.

This books has finally laid to rest some of the last dangling plot threads from The Roman Mysteries, which makes my completist heart very happy! There is just one volume in this quartet left, so now it's time to find out what will happen to these younger heroes, and finally shed some light on the still slightly mysterious Bouda...

Links to all my Caroline Lawrence reviews are available here