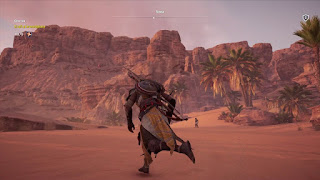 My husband is currently furloughed and playing a lot of Assassin's Creed: Valhalla, which reminded me how behind I am on this! For anyone who didn't catch my first post - I am terrible at video games, and have almost no time available to play them, but I really want to play through the Assassin's Creed games, especially the ancient world ones. So I am blogging my very slow progress through them - these are not proper gamer's reviews, but experiences of the game from someone with very little experience of video games!

(If you're wondering, no, I still haven't managed to beat any of the Mario games. I had to start Super Mario: Odyssey again).

So, I tried to make some more progress with Origins, and spent an evening playing (for me, that is a lot of time - I am not awash with free evenings to spend doing these things!). But I came out of it very frustrated because I spent the entire evening running around trying to find some deer to shoot. And then working out how to shoot them. And working out why I kept missing out on looting their skin (some random panther or leopard or something kept nicking it!).

This frustrated me on several levels, many of them related to my gaming incompetence. However, it also frustrates me as an historian. The idea of this section of the game is that your character needs some better armour (and with my inability to fight properly, I need all the help I can get!). The first time I tried to play this, I spent absolutely ages wandering around looking for markets etc. before eventually resorting to Google and finding out that I was expected to make it myself. Not only that, I was expected to hunt down the animals for the raw materials first.

Now, I suppose if you were stranded in an ancient city with no money or something, you might have to resort to this. But Assassin's Creed characters find random chests full of money that they happily just steal all the time, and I've got a rather nice camel from somewhere (he's worth a fair bit, especially considering it was the Romans who brought camels to North Africa and they haven't arrived yet) plus various friends. So I'm not convinced this character has no money whatsoever for essential goods.

That being the case, there's absolutely no reason this guy should have to hunt down his own animals and make his own armour. He's in Siwa, a major town once visited by Alexander the Great, in the period just before the Roman conquest. There would be marketplaces and shops everywhere. At the very least, he could buy the raw materials, and almost certainly the armour itself. 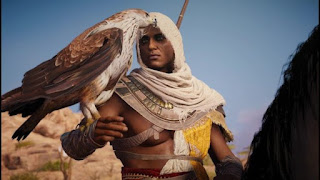 I understand that this is largely a training exercise for the game - it's good practice at shooting things while your targets are still helpless animals and not people with swords. But it's not encouraging me to train and get better, because it's really, really boring. If you're an experienced gamer, you can probably whizz through this bit quite quickly. But for me, it takes hours. It takes ages just to find where the deer are in the first place. You're supposed to use your bird friend to find them, but I find working out how to set targets through the bird really difficult. Then you have to hunt them down - when you're inexperienced, this also takes ages. It's a really, really boring way to try to get the hang of the systems, when all you get at the end of it is some armour.

I want to play these games because I want to play through the stories they tell, and explore the historical worlds they recreate. The treasure room section wasn't so bad because at least it was exploring an ancient site. But wandering around on your own near the river looking for deer for hours is just not that exciting, nor is it offering any kind of experience of ancient Egypt (deer are deer throughout history!).

I think I might go back to trying Assassin's Creed: Odyssey again...