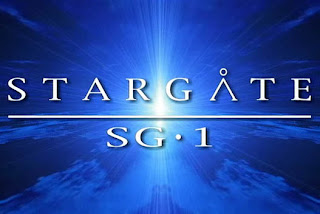 Stargate was an early film from Dean Devlin and Roland Emmerich, the team that brought you Independence Day and Godzilla. It starred Kurt Russell and James Spader as a retired Air Force Colonel and an Egyptologist, respectively, who go through a mysterious 'gate' discovered near Giza and discover an alien planet that bears a remarkable resemblence to ancient Egypt (complete with weird alien pseudo-camels, which it shouldn't really have because the Romans brought camels to Egypt...).

The concept was later expanded and developed to become a hit TV series, Stargate: SG-1, which starred MacGuyver, ran for ten years, and produced two spin-offs, Stargate: Atlantis and Stargate: Universe (all of which have now been cancelled). I've only really watched SG-1 so far, but I'm sure my brother will get me to watch some more Atlantis and Universe soon, he's been trying for long enough!