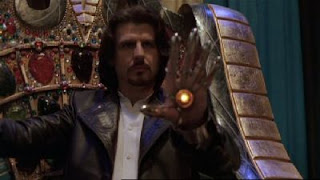 This third season episode of Stargate: SG-1 features Seth, a Goa'uld who makes a one-off appearance, rather than our regular bad guys Apophis or Osiris. These are always good fun - they're often able to tell a tighter story than episodes focusing on long-running characters and arc plots.

As usual, the basic details given about the Egyptian god Seth are pretty much accurate - a god associated with chaos and confusion (though they perhaps dwell a bit too much on the 'evil' aspect, since our cultural conception of evil is rather heavily Christianised). This includes the detail about the mythical/fictional animal that represents Seth - the Egyptian god is indeed represented by a mysterious animal in Egyptian art. He also really was identified with the Greek monster Typhon. I have no idea where the medieval bit comes from - I think that's an invention of the writers, but I might be wrong.

I like Daniel's (totally correct) theory that a Goa'uld hiding somewhere on today's Earth would most likely be a religious cult leader - as he points out, it fits their M.O. rather neatly. The incorporation of the Greek identification of Seth with Typhon into this story, as an indication of what Seth was doing on Earth in the Classical period, fits nicely too. The more personal storyline in this episode concerns Sam, her father and her brother, who has had a major falling out with their father in the past and didn't come to his apparent deathbed in the previous season. Our heroes also spend a fair bit of time with a man whose son is in the cult. Since much of Seth's mythology concerns his murder of his brother and battles with his nephew, this makes for a vague but nice thematic link.

The costumes worn by members of the cult are fairly typical twentieth-century Western cult styles (at least, as far as these things are represented on television - I haven't seen any real ones!) but most of them could equally easily belong to members of an Egyptian-based ancient religion. They look like simple linen robes, like those worn by members of the cult (different kind of cult! well, a little bit different) of the originally Egyptian but later Greek-ified goddess Isis in the Greek and Roman world. The more senior members' outfits, a combination of pyjamas and karate clothes, are less so, since ancient Egyptians (and Greeks and Romans) didn't wear trousers. I love Seth's outfit. You can't go wrong with a villain in black leather. And an evil little black goatee. And he has fabulous floppy Snape-hair. 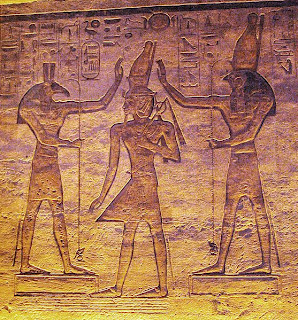 For some reason I've been interested in stories about scary American religious cults for a while (I say American because all the stories on this topic I've seen have been written and set in America - though I'm sure similar organisations exist elsewhere). This probably comes of watching too much X-Files as a teenager. I also seem to remember a melodramatic Sweet Valley High book called Kidnapped by the Cult! that I was quite fond of. Anyway, I enjoyed this episode. It's nice to see Canada playing Seattle rather than an alien planet - it's rather more convincing as Seattle! Seth doesn't really do anything particularly interesting - his actions are all bog-standard evil cult-leader stuff, without even the added interest of including exciting money-making ventures - but he does have great hair and a fantastic black leather coat.


Seth, on the left
All Stargate reviews
Egyptology Mythology Sci-Fi and Fantasy TV