Pyramids is one of my favourite Discworld novels. It's quite an early one - the seventh - and it's a standalone novel, featuring none of the regular major characters. I would really love to see it made into a movie - it's a perfect choice, as it requires no prior knowledge of the Discworld and plays on well known images and themes relating to ancient Egypt and Greece.* Also, in my head, Chidder is very sexy.

(*Not like the current Sky adaptations though - a proper movie, maybe directed by Joss Whedon, Mike Newell or Alfonso Cuaron. The Sky adaptations are all right, but they seem to be so busy messing around with sets and costumes, they're not funny).

The hero of Pyramids is Teppic (King Teppicymon XXVIII), who becomes King of the ancient land of Djelibeybi when his father dies in an unfortunate accidental suicide (overcome with the pressure of having to make the sun come up, he thought for a moment that he was a seagull, and tried to fly). Teppic has been sent away to Ankh-Morpork to be educated (the opening sequence, as he takes his final exam at the School of Assassins, is a brilliant pastiche of the British driving test) and he returns to the Old Kingdom with a lot of new-fangled ideas, mostly involving plumbing...

Mostly, Pratchett plays with the mental images everyone already has of Egypt - pyramids, camels, cats, crocodiles. The well-known notion that pyramids preserve cheese is tweaked for the Discworld so that the pyramids actually store time, becoming the basis of the plot. Egypt is not my area of expertise, but to the best of my knowledge, Pratchett's representation of Egyptian religion is actually not that far out - according to Jan Assmann, whereas Mesopotamian and Greek observations of natural phenomena were focussed on foretelling the future, Egyptian observations of the same things focussed on maintaining order in the present and ensuring that things contined as they had before. (This is probably the result of the vital importance of the regular, annual flooding of the Nile to Egyptian farming).

Teppic orders the biggest pyramid ever to be built for his father (who wanted to be buried at sea) and is then forced to flee the country saving Ptraci, his father's favourite handmaiden, from being fed to the crocodiles. (I first read this book when I was about 14 and it was years before I worked out how to pronounce the names to get the joke - I had been pronouncing them 'Puh-trah-ki and Duh-jeli-baye-bi, when of course, it should be Tracy and Jellybaby). Just as they cross the border, the pyramid's stored time cause a rupture in reality and the whole country disappears, trapping Teppic and Ptraci in neighbouring Ephebe.

Ephebe is the Discworld's version of ancient Greece. It is ruled by a Tyrant, using a strange new political system that Teppic thinks is called 'mocracy'. A little way from the border, Teppic and Ptaci discover the philosophers Xeno and Ibid, shooting at tortoises, because Xeno insists that it should be locially impossible to shoot a moving tortoise. Teppic is then invited to a symposium (which is almost exactly like an ancient Greek symposium, except for the plate-smashing at the end - a bit of moder Greece seems to have crept in there) where he meets a few more philosophers and other assorted ancient Greek types, all in uniform of white sheet and grey beard.

Xeno is the Discworld counterpart of Zeno of Elea, whose Achilles paradox argued that Achilles could not catch a moving tortoise. Copolymer, 'the greatest storyteller in the world', who tells Teppic the story of the Tsortean War ('Wossname's armour shone like shining armour. Fight and a half, that fight. Between thingy, not the one with the limp, the one with red hair...') is presumably Homer. Iesope is Aesop, obviously, and Antiphon is Aristophanes. I can't think of anyone in particular analogous to the Discworld's Ibid; the name reflects tha Latin abbreviation, often used in older scholarly works, meaning 'in the same place'.

Copolymer's full version of the story of the Tsortean war, by the way, is brilliant - a perfect combination of epic epithets, like 'red hair' and so on, with the sort of oral storytelling that more often happens among drunk friends in a modern context. It also includes all sorts of little details from the real Trojan cycle, thrown in with everything else, like Copolymer's reference to 'the one with the limp' (which might be Philoctetes; 'Oedipus' also means lame, but he isn't part of the Trojan War cycle) who 'didn't want to go, said he was mad' (that was Odysseus).

Teppic is actually looking for Pthagonal (Pythagoras), who is glumly complaining that the diameter of his pie should divide into the circumference three times, not 3.14....... etc. This is the most significant use of classical philosophy in Pyramids, for the novel is based on the idea that the world really is, as Pythagoras said, all based on mathematics. This, coupled with the added notion that camels are the greatest mathematicians in the world (because they have so much time to think out in the desert, and they have to do quite complicated sums to get their legs to move properly) is what leads to all sorts of hi-jinks involving disappearing countries and exploding pyramids.

Teppic gets his camel, You Bastard, to take him back to Djelibeybi; meanwhile, the absence of the kingdom in between them has led Tsort and Ephebe to re-start the Tsortean war. Except, this time, both sides have built battalions of wooden horses and are sitting, waiting for the other side to come and take them in. Ephebe, which up to this point has chiefly represented classical Athens, now becomes a combination of ancient Mycenae (Agamemnon's kingdom) and classical Sparta - one young soldier has been told to come back with his shield or on it (Plutarch, Moralia, 240 anon16), and while briefly facing certain death, the captain gets as far as 'Go, tell the Ephebians - ' before giving up as the army arrives (Herodotus, 7.228).

Once everything has been sorted out and the country restored, Teppic leaves and Ptraci becomes Queen - at which point she turns into Cleo from Carry On Cleo, calmly seeing visitors in her asses' milk bath (for which she plans to install plumbing). She was halfway there already anyway - the handmaidens in Pyramids are just like Carry On hareem girls. The ending of the book is wonderful and takes tying things up neatly to a new level - it involves use the ouroboros, the symbol of the snake eating its own tail.

There's probably lots more I could say about Pyramids, but I really have to go work on my thesis now, so I'll leave it there. One final note: there's a review of a film I hadn't heard over at The Life of Antoninus Pius, but which sounds like it might be very entertaining...

Me, on possibly the greatest mathematician in the world, in Tunisia. I named him You Bastard - in an affectionate way - because he kept trying to throw me off in revenge for me having sat on him wrong. We made peace during a break in the ride and hewas much nicer on the way back!

Edited to add: I forgot to mention the Sphinx! Teppic gets the traditional Greek riddle but has a fabulous, unique solution - having failed to get the answer, he insists that the question is unfair and it should be amended to 'What, metaphorically speaking, walks on four legs just after midnight, on two legs for most of the day (barring accidents), until at least supper time, when it continues to walk on two legs or with any prosthetic aids of its choice?' The Sphinx gets so confused, he is able to slip past it.

I also forgot to mention the dreams, a subject currently close to my heart. The dream about the seven fat cows and seven thin cows is an ancestral dream of the royal family here, with one cow riding a bicycle or playing an amusing instrument.

I love these references - I love the way they gently poke holes in the mythology, whether its the obscurity of a riddle or a dream report that lacks dream-like qualities. Plus, its just really funny.

(And I'll say no more on the religious issues; in the Great Religious War of Fantasy Authors, I'm on the side of J. R. R. Tolkien, C. S. Lewis and J. K. Rowling, rather than that of Philip Pullman, Terry Pratchett and Douglas Adams - whose sci-fi is so crazy it's practically fantasy). 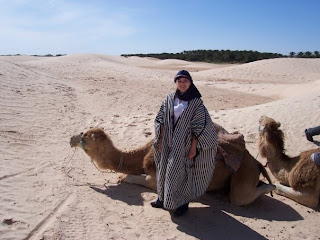