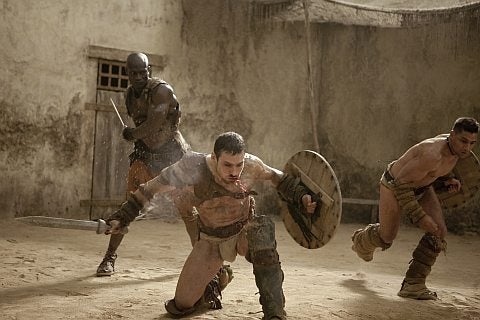 My Spartacus review is finally ready, delayed by a further couple of hours because I was distracted by the World’s Longest Tennis Match. No group reactions this week I’m afraid, as I was at home watching with Mum again (now that would be an interesting addition to Watch With Mother, wouldn’t it?!).

I am finally starting to get the hang of who’s who – Crixus is the big guy, the toughest gladiator, whom Spartacus was forced to surrender too, Xena is bonking in her spare time and who fancies the slave girl; Barca is the long-haired Carthaginian who, as several commenters have pointed out, is looking pretty sprightly for someone who must be getting on for 100 years of age (the Punic Wars with Carthage ended in 146 BC, Spartacus escaped and went on the run in 73 BC).

‘Listen carefully to my instruction’ said Drill Sergeant Guy – ‘I shall say zeez only once!’ added Mum.

I like the bit about the close relationship between praying and blaspheming – reminds me a bit of the end of Four Weddings and a Funeral, when Hugh Grant is swearing in the church. We rather like Xena’s dress, décolletage and all. John Hannah is also covering up his wound from last week with some rather fetching long tunic things. I do, however, wonder where Barca’s boyfriend got his fancy earring thing from.

Our Latin Word of the Week this week is medicus, doctor – used presumably because they’re already using some kind of derivative of doctor, teacher, for Drill Sergeant Guy.

What on earth is up with the maggot eating?! Seriously, that’s just weird.

Theocoles, the Shadow of Death, rears his head again, and it turns out he’s not a god, he’s a gladiator, and even Crixus looks nervous. Forcing Crixus and Spartacus to fight together is a nice twist, and the scenes between the two of them and Drill Sergeant Guy – who we also get a bit more background for in this episode – are nicely tense. The blow-by-blow recall of Drill Sergeant Guy’s own fight with Theocoles is rather good too, and, ironically, Drill Sergeant Guy is the only man to survive a fight with Theocoles because he kept fighting for so long that eventually someone put a stop to it and let him go. I bet Nicholas Mahut is wishing they could have done that at Wimbledon right now.

Ah, there we are – full frontal male nudity (from Crixus)! And, despite the décolletage on show, we haven’t seen a single tit yet – so one point to feminism! Sort of. It’s a step in the direction of equal opportunity exploitation anyway. I read a really interesting blog the other day – which I’d link to if I could remember where it was – pointing out that Twilight is a relatively rare example of the female gaze being celebrated, rather than the homoerotic gaze, as is the case with 300 (which I will cover at some point). Spartacus tends to lean towards the homoerotic, but in this scene, as Crixus stands there naked in front of three ogling women, perhaps there is a teeny move towards the female gaze as well. (Tits did turn up eventually – a random woman was waving her breasts around in the corner as the gladiators came out for battle).

Haldir’s Paris Hilton-like wife is back, still irritating, still miffed at Spartacus on her husband’s behalf, but her offer to set Xena up with some kind of fertility expert is intriguing. I was hoping the woman might turn out be a witch, which would be pretty cool, but it turns out it’s a priestess. The priestess has a rather exciting and exotic-looking costume (not sure how accurate it was, but it seemed plausible). Unusually for a Roman, she actually considers the possibility that the problem is the man. Usually Roman medical writers assumed that all fertility problems are caused by the woman, but, on the other hand, all the writers whose work has survived are men, so it’s plausible to think that a priestess might be more open-minded on this issue.

I must admit, I was mildly surprised that, having been informed she had to have sex within an hour by the priestess, Xena chose to sleep with Crixus, not John Hannah. Was John Hannah unavailable or would she prefer to have Crixus’ child? She really s

eems very fond of him, which would be sweet if she didn’t also seem to be fairly happy with her apparently quite nice husband, and if she wasn’t basically raping him every time they have sex. I even almost felt sorry for her when, having told her he couldn’t have sex before the big fight, Crixus went off with the slave girl – but didn’t really, due to the aforementioned rape issue.

It was Aufidius that tried to have John Hannah killed – which would be more of a revelation to me if I could remember which one he was... John Hannah has a small child killed – will he go all dark, fight Obi-Wan and fall into the crater of Mount Vesuvius now? I did love his awful, constipated expression as everyone around him expressed their horror the next day.

When the Big Fight finally arrives, Theocoles himself looks like what you’d get if you corssed an Orc with an Elf but didn’t make them incubate underground a la the Uruk-Hai – long blond Elfy hair but a scarred, tough, Orc-y face and BIG. When Spartacus and Crixus think they’ve beaten Theocoles and barely sustained a scratch between them, it’s a genuinely moving moment even if you know that, like all the best bad guys, he’s not finished yet. Sadly, then they went too far, and Blondie’s superhuman ability to fight when he’s practically been sawn in half by Crixus went beyond implausible and into totally ridiculous. Love the sunlight-blinding trick though.

Dad wandered in at this point and commented for the benefit of Mum and me, who weren’t looking at the screen ‘Decapitated him! He’s still going though... ‘Tis but a scratch!’ I do feel the need to point out, however, that somebody watched The Shawshank Redemption a bit too recently.

And then it just stopped – but what happened to Crixus? Is he alive or dead? The signs seem to point to certain doom – everyone being so in love with him, all that talk about the future, his noble and clever last act helping Spartacus out with the sunlight trick that even Dad – who is, shall we say, not a fan – was impressed by – all of this indicates he is not long for this world. But – but – I was just beginning to like him!

Well, everyone told me the series started to pick up around episode 5, and this is indeed very good. Much less blood and guts, much less pop-culture-Roman-orgy stuff, much more dialogue and characterisation and some really

interesting plot developments. (Though Paris Hilton is getting really annoying and I rather hope she somehow ends up in the arena, on the receiving end of Crixus’ or Theocoles’, or Spartacus' or their equivalent's best work). And with that little cliffhanger, I can’t wait for next week – a very good sign indeed!
Gladiators and arenas Roman history Spartacus TV