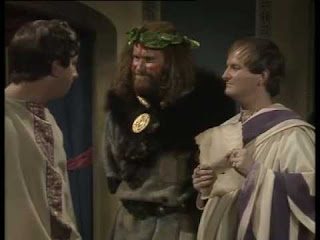 Considering this is a 1980s British sit-com (i.e. it’s about slobbish losers trying to get laid, Yes, Minister aside of course) set in ancient Rome, it’s something of a miracle that it took six episodes to get to the orgy. There is some concession to history, as Functio’s wife makes a comment about Romans and boys and Aulus points out she’s mixed them up with the Greeks (and people will continue to do so, Aulus). But really, this episode is playing with cultural stereotypes of Rome and it knows it. And, to be fair, the British are as much into complete sexual liberty in honour of Saturnalia as the Romans are.

I was entertained by a conversation between Functio and his young daughter, who asks what an orgy is, because my parents gave me the exact same answer when I was younger and watching I, Claudius (‘it’s a sort of party’). We also get to hear Badvok start a speech with ‘Friends, Britons, Countrymen!’ which is obvious but funny anyway. As a former inhabitant of Ipswich, I also found Badvok’s confusion when he was told to meet ambassadors from the East pretty amusing (Well, I once met a man from Ipswich...' Ipswich is a town in East Anglia, on the east coast of Britain). Badvok also tries to learn Latin and is given the traditional British Latin class drill ‘Amo, amas, amat…’ and, on being told there are two ‘yous’, declares that he’s abolishing all plurals. I think a lot of people probably wish he’d been successful there.

There’s something almost politically savvy and satirical about Badvok changing the rules of Saturnalia to make himself king forever – this is, after all, roughly analogous to what Caesar (started out with a relatively normal political career before, you know, taking over everything) and Hitler (democratically elected) did. However, I’m not entirely sure political satire is the main point of this story – though lawyers certainly come in for some stick when Aulus tries to consult a money-grabbing one (played by Angus Deayton!). And Badvok certainly comes to regret his decision when he realizes that not only does being King entail some work, it’s also extremely dangerous.

On an entirely unrelated note, 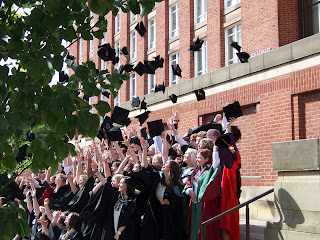 I want to do a PhD and get to call myself Doctor and wear a fabulous floppy hat and look like Harry Potter for the third time. What’s that? I need an original research idea for a thesis? Ah…

Oh this is it! This is The Idea. This is going to completely change the face of scholarship! This will get every bit of funding going and become a book straight away and I will get invited to conferences to be keynote speaker because everyone will be totally in awe of my amazing insight!

You know what, this is going so well, I think I’m going to submit it early and get it out as a book by next year.

I can no longer see anything except words upon words in Times New Roman, I dream about my thesis, when I eat I imagine I’m eating my thesis. I hate my thesis. I have never hated anything so much in my entire life. Not even a Pot Noodle.

This eminent scholar has no idea what she’s talking about! She clearly doesn’t understand the evidence or the theory and I don’t know how she ever became so well known, she’s obviously an idiot! I’ve devoted two chapters to bringing her down, point by point… who did you say my external examiner was?

Dear IT department, there has been a slight accident with the printer…

Oh examiners, I know, the whole thing is the biggest pile of rubbish you’ve ever read, never mind giving me a PhD, you should probably take away by BA right now and I promise I'll never show my face in academia again!