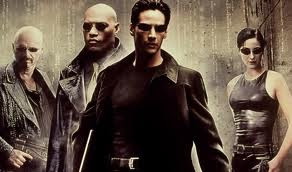 I have often felt mildly disappointed that, since I was doing my GCSEs at the time, I missed out on the chance to see The Matrix for the first time in a cinema. It might not look so impressive now, but back in 1999, I can still remember how blown away I was by Neo bending backwards to avoid bullets in slow motion (followed by Trinity's equally satisfactory concluding note, 'Dodge this!'). The Matrix was a game-changer in the field of special effects, but more importantly, it also had a strong, compelling story filled with equally strong characters, both male and female, which made it a stand-out film in a really good year (which also included The Sixth Sense, The Mummy, Being John Malkovich and one of my favourite films of all time, Galaxy Quest. We won't hold The Phantom Menace against it). I am, therefore, restricting myself to discussing only The Matrix itself in this post - the two sequels, while maybe not quite as bad as you remember, definitely lacked something, possibly coherence.

The Matrix blends a lot of different elements into its mix, including at least two different mythologies - I say 'at least two' because I know there's a strong Asian influence on the film, but I know next to nothing about Far Eastern (as opposed to Near Eastern) mythology. The two biggest Western influences, though, are clearly Greco-Roman and Judaeo-Christian mythology. Judaeo-Christian mythology might be said to be the biggest influence of all, since it provides the story (guy dies, comes back from the dead, saves the world) as well as various other smaller 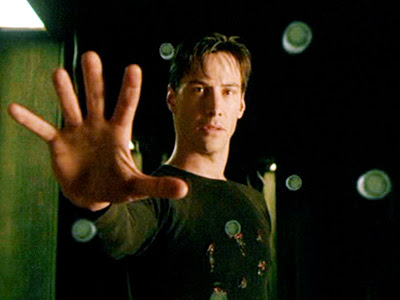 references (Trinity, Zion, the ship named Nebuchadnezzar after the biblical dreamer, the thematic exploration of faith and doubt). Greco-Roman myth, however, has an important role to play as well.

Keanu Reeves - another one of those things (or in this case, people) I will not hear a word against. I actually think he's pretty good in Much Ado About Nothing.
Like most of the names in the film, Morpheus is significant - a Roman god of dreams. Ovid (in the Metamorphoses) describes Morpheus as one of three sons of Sleep, who is particularly skilled in imitating human shapes. This specific definition is, as far as we can tell, an addition of Ovid's, but it certainly works as an allusion in the film, which is full of intelligent computer programs that look like people. The human Morpheus as god of dreams is a little off - surely Morpheus is the character who wakes people up?! - but the dream analogy is interesting. Like Inception, Through the Looking Glass and What Alice Found There and countless episodes of science fiction shows (Red Dwarf's 'Back to Reality', Voyager's 'Waking Moments', The X Files' 'Field Trip' and Buffy's 'Normal Again', to name just a few) the film problematises reality and questions how we know what's real and what isn't. Intriguingly, as far as I can tell, this appears to be a modern problem. Apart from Ovid (who questions whether Love really appeared to him in a dream in a letter from exile, and who just has to be different) and contrary to some nineteenth century academics who thought the ancients couldn't tell the difference between dreaming and reality, ancient writers are generally pretty clear whether someone's dreaming or not. They compare things that happen to dreams and they describe things that happen in dreams, but they don't include the sort of trope we see here, where people aren't sure whether they're dreaming or not and can't tell the difference between dreams and reality. I wonder if this new sub-genre has something to do with developing technologies, from the photograph to virtual reality...

The most significant Greco-Roman element in The Matrix, though, is of course the Oracle. From a Latin word, this means a shrine where a god answers questions, usually about the future, often through a human intermediary. The Oracle quotes the famous phrase that Pausanias said was inscribed in the temple at the Delphic Oracle, 'Know Yourself', which she also has painted above her door. The phrase, in this context, refers to the need to be sure what you're asking and what the answer really means, so you don't get caught out like Croesus of Lydia (the one who was told he would destroy a great empire, but the Oracle failed to specify that it would be his own). It is perfect for the film, since Neo (and Trinity as well) can only fulfil the prophecy by knowing himself and it is his and Trinity's understanding of themselves that is the only thing that can reveal that he really is the One.

The inscription at Delphi, however, was, of course, in Greek (γνῶθι σεαυτόν) whereas the Oracle's painting here is in Latin (nosce te ipsum, given here in a shorter form, temet nosce). As ever, I am left wondering whether there is any great significance to the Latin - did some medieval poet mention it in Latin? Is from Dante's Italian somewhere? - or whether, more likely, this is the usual acute research failure that assumes that everything ancient is Latin. This is a rather depressing situation and must be enormously frustrating to modern Greeks, given that there is actually a fair bit more surviving literature from the ancient world in Greek than in Latin. This particular case is made even worse by the fact that at least one of the Latin authors who mentions it (Juvenal) uses the Greek when he does so. I can only assume that, because Latin is perceived to be easier and therefore taught more often (actually I find Greek easier myself) and because Latin is still used in the Catholic Church and in choral music and is therefore very much still around, Latin is the default ancient language that most people are familiar with, so Latin is what they use. The writers of The Matrix must have known this inscription was originally in Greek, since they'd done enough research to know it existed, so perhaps they thought Latin would be more easily recognisible, and didn't want to further the confuse their audience in an already potentially confusing film by throwing an unfamiliar alphabet at them.

Language quibbles aside, though, the use of the Oracle in The Matrix is really rather good and much closer to ancient oracles than most modern versions. Modern oracles in science fiction and fantasy tend to tell the protagonists what is going to happen, either directly or indirectly - and then it does. In The Matrix, however, what happens, happens at least partly because the Oracle told them what she told them - lampshaded early on when she points out to Neo that what will really bother him is whether he would have broken her vase if she hadn't told him not to worry about it. This is the sort of oracle we read about in Herodotus and in Greek tragedy, the sort that complicates the issue because a lot of the time, the situation would never have come about without the oracle in the first place (as with the unfortunate Croesus, and in the story of Oedipus, who would never have killed his father or married his mother if they hadn't exposed him in an attempt to avert the oracle). The way the Oracle's advice causes a chain of events that leads to the implied result is very Classical, and makes this particular oracle a lot more interesting than your average sci-fi soothsayer.

There's probably a lot more I could say about The Matrix, Classical or otherwise, not to mention the other two films, but that will have to wait. What I think this really reiterates, though, is that, 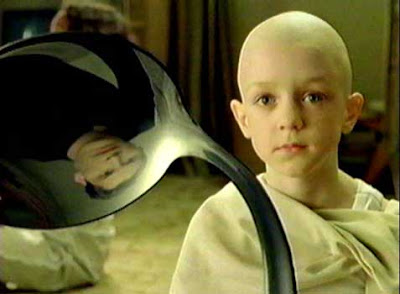 just as Inception proved again this year, it is far from impossible to create a big budget sci-fi epic that is built around ideas, not explosions. Well, ideas as well as explosions. And guns. Lots of guns. The Matrix succeeded, not because of bullet time (impressive though that was) or even because of the guns but because of the story, told with plenty of humour, the characters and the ideas that really got us engaged and interested. Hopefully there will be many more equally thoughtful blockbusters in the future!
Biblical stories Dreams Films Mythology Sci-Fi and Fantasy