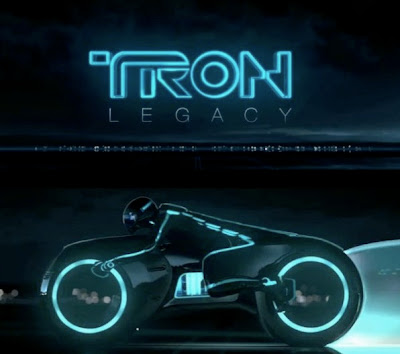 Went to see this last night, and enjoyed it, especially the very cool race across the grid near the beginning, though I'm still not sure I really get much more from the 3D (I liked the 2D sequence on top of the tower at the very beginning, which made my stomach drop more than the 3D!). It was painfully obvious where costs had been cut on making Jeff Bridges look younger (filming from behind his head!) and the CGI for that effect looked a bit weird and, for some reason, made him resemble the late, great Patrick Swayze, but it was a fun concept. The story was sweet, if predictable, and there was plenty of genuine emotion with a decent payoff. And it starred Patroclus! (doing rather better here, and much less reminiscent of Hansen).

There were a couple of fairly random Classical references floating about in there. There were gladiatorial games, of course, though these have been designed to resemble generic computer games more than actual gladiatorial combat. I saw the original Tron a long, long time ago on TV and can't really remember it, but the way the discs-as-weapons were used here reminded me of The Matrix more than anything else, all dodging in bullet time rather than actual fighting. The one-on-one setup reminded me of playing Street Fighter on my cousin's Super Nintendo many years ago and even the amphitheatre had been made triangular, rather than round, to make it look more in keeping with the original Grid. All in all, there wasn't must left of Roman gladiatorial combat in here except the idea itself, which soon gave way to the brutal but cool race sequence.

Then there were the names. The use of Classical names in science fiction vaires enormously, from the very obviously symbolic (people called Ariadne are good at mazes) to the so-symbolic-it's-almost-silly (just why would anyone call a spaceship designed to fly towards the sun Icarus? That is never going to end well). Then there's the Tron: Legacy approach - throw some mythological names at your characters and see if something symbolic comes out. So we have Micheal Sheen's fabulous Castor/Zuse, the highlight of the film, a mad, scenery-chewing combination of the Volturi, David Bowie and Caligula. But why is he called Zuse - Zeus, spelled funny - and why does he name himself Castor? Castor is one of twins and you would usually expect to see the name used in that context, or perhaps in connection with horses, but neither applies here, unless it's a reference to his dual identity. Zeus killed his father, which might be the analogy they were going for there, but given that Zeus' main, most important qualities are being Chief god, lightening god and general ruler, he doesn't really seem to fit with Sheen's rather daft, definitely not as powerful as he'd like to be, character.

A quick look at the cast list also reveals that the women who originally kitted Sam out for the Games were called 'Sirens.' Because they lured him to his death? Except they didn't, they just changed his clothes, and he didn't die anyway. Because they're sexy? But the Greek sirens weren't necessarily all that sexy. Hmm.

Brother points out that the writers probably just thought the names sounded cool, which is quite likely and fair enough (I seem to remember throwing Celtic names at random at a fantasy story I was working on once with no idea what significance they might have!). The fact that these are the only Classical names in an otherwise electronic-sounding nameverse (Clu, Tron, even Cora) makes them stand out enough that you feel they must have some significance, and there are definitely random bits of symbolism thrown into this film in other places, suggesting we should be on the lookout for it (Sheen's line 'Behold the son of our maker!' is the most painfully obvious, sounding like it's come straight out of the King James Bible). And Zuse/Zeus seems an odd choice if it doesn't mean anything, since he's one of the best known and most obviously symbolic Olympian gods. But the whole thing does make more sense if we assume the writers just liked the sound of the names, and the film really doesn't need to add extra layers of symbolism that don't quite match together - the electronic-Nazis story that forms much of the plot is quite enough to be going on with!
Films Gladiators and arenas Mythology Roman history Sci-Fi and Fantasy