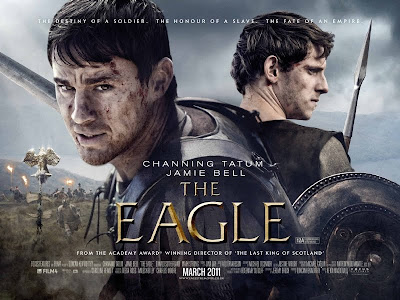 I really enjoyed this movie, a lot more than I thought I would. It dragged a bit in the middle, but was largely entertaining and really nicely – well, skillfully is perhaps a better word – filmed, Kevin Macdonald’s documentary background really contributing to creating a realistic-feeling world. It also helps that the source material (Rosemary Sutcliff’s boys’ adventure novel, The Eagle of the Ninth) provides plenty of opportunities to see different aspects of life both north and south of the wall, so we see more than just Scottish woodlands, pretty as those are. Spoilers follow.

First of all, I suppose it’s necessary to point out for the umpteenth time that scholars now believe the ninth legion didn’t get lost in Scotland at all. I’m not sure how much that really matters – it’s a good story, set in a time and place for which evidence is pretty sketchy, so why not? It’s also worth pointing out that, this being the story of the recovery of the Eagle of the Ninth, one character discusses re-forming the legion at the end, so the Ninth recorded running about in the Rhineland later could easily be the re-formed version.

All the Romans in the film speak in American accents, with the British characters in a variety of British regional accents (Jamie Bell uses a toned down version of his natural Geordie, the British physician is Welsh and the Picts, of course, Scottish). This makes a refreshing change from The Queen’s Latin and also really emphasises the Romans’ position as an occupying force. This could be done by giving the Romans English accents and the Britons Welsh or Scottish accents, but to an English viewer (and I realize the Scots and the Welsh will feel very differently about this!) the use of ‘foreign’ accents to represent a foreign invading force works particularly well. The Picts speak Scots Gaelic, as in Centurion and presumably for the same reason – although Welsh would be more accurate, viewers would probably be confused as to where they were, or why the inhabitants of Scotland sounded Welsh. The film also seems to imply that all British tribes, north or south of the Wall and including all Picts, speak the same language, which seems phenomenally unlikely to me, but there you go.

The film features a gladiatorial sequence which I almost totally loved (thumbs pointing the way everyone understands, accurate or not – see the reasoning behind Scots Gaelic). We got to see something not-fighting happening in the arena, which we hardly ever see, and it was taking place in a rickety, wooden, tiny local amphitheatre, which we also see very rarely (though the small amphitheatre where Proximo is based in Gladiator is similar). But, of course, as always, we had to have a fight to the death, because it’s physically impossible for any TV producer or film-maker to show us gladiatorial combat without fatalities, or near-fatalities, despite the economic craziness of the idea of just about every fight being to the death (a Roman might not care about slaves or their welfare, but they still cost money. The worst place to be a slave was a silver mine – silver was worth even more money. Executions are another matter, of course – there were plenty of those in the arena). Still the story wouldn’t work otherwise, so fair enough.

The film is very well shot, though the opening few shots did appear to be trying to make Romans in Britain into Apocalypse Now, which was interesting. Most British-set historical films try to make Britain look like The Lord of the Rings, which works pretty well because JRR Tolkien was British and it looks right – Apocalypse Now doesn’t fit quite so well. The performances are all fine, though all three of us who saw the film agreed that its biggest flaw was that we couldn’t quite ‘believe’ the relationship between Esca and Marcus. We felt like a whole bunch of character development from the book had been left out (none of us have read the book, but that was the sense we got) and the film played up the hostility between them far too much, making their eventual trust and friendship feel like it came out of nowhere. This wasn't the actors' fault - Bell in particular was very good - 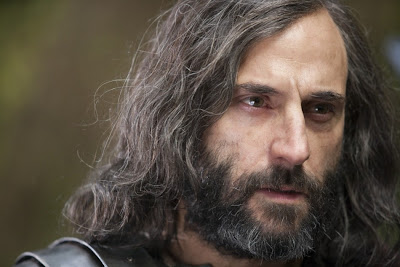 Mark Strong as a veteran of the Ninth, unrecognisible under Aragorn-hair and a slightly dodgey American accent
I was also genuinely shocked by how much you can get away with in a 12A these days. Back when The Fellowship of the Ring came out, I remember hearing that the orcs had to bleed black blood because red blood would raise the film’s certificate, and poor Boromir manages to die of multiple arrow wounds without, apparently, bleeding at all (he just looks sort of wet). In this film, however, we see a head chopped off – and we see it fall right off and blood spurt from the neck and everything – we see a leg chopped off, we see stabbings and although the camera does cut away from this one, a small child is murdered right in front of our heroes. I was a sensitive child (I’ve only very recently becomes somewhat immune to massive amounts of blood and gore on screen) and would have been completely traumatized by this. Which leads me to another minor problem – the film doesn’t really know what it wants to be. The book is a children’s book, but this is not a children’s film (see above!). On the other hand, as one of my friends pointed out, there were no women in skimpy outfits (no women at all, in fact, at least none with any lines), the blood-letting was relatively tame for a modern sword’n’sandals movie, there was no swearing… (‘and it would have been much better if there was’, he added). It doesn’t quite fit with modern grown-up swashbuckler type films, but it’s too gory for kids, so it sits a bit awkwardly in the middle somewhere (though, personally, I can live quite happily without skimpily-clad women, blood, guts and swearing! I’m an old-fashioned girl who enjoys a good Errol Flynn swashbuckler, where no one bleeds at all). Aside from that, though, the fight sequences were excellent – I especially liked seeing the Roman turtle formation (I think that’s what it’s called – where they all create a sort of box with their shields to protect themselves) in action, and we saw exactly how effective it could be in close combat and how the training and tactics of the Roman army could work against far bigger forces (all in miniature, with a small skirmish, but it worked well).

The part where the excellent realism-style filming falls down comes as the story goes on and we drift into the less plausible parts of what is, in its origin, a light adventure story. Our hero has a leg wound that is slowly killing him and he can’t walk any further… but after a night sitting in a freezing river (full of lovely gangrene-carrying bacteria, presumably), cuddling the titular Eagle (this is a man badly in need of a teddy bear) he is magically made well enough to fight a bunch of crazy Picts and end up one of the battle’s few survivors, then walk all the way home and cheerfully present the Eagle with nothing more than a limp. The serious tone of the fight sequences also brought home rather sharply the notion that the old Ninth 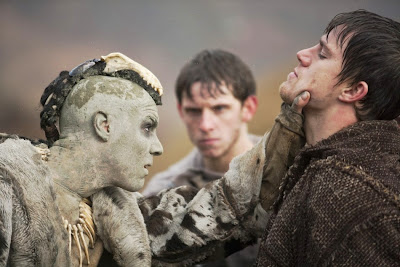 Legion soldiers’ wives and children are probably not very impressed that they’ve run off to die in defence of a shiny metal bird (I mean, if it was the owl in Clash of the Titans maybe it would be worth it, but this one doesn’t even click…).

The Seal People's body paint makes more sense when you see how well it camoflages them against the rocks where they live
I’d recommend this film, because it is an entertaining story and offers a nice slice of first century life, beautifully filmed (the shot as our heroes pass through the gate in the Wall and head out into the wild lands on the other side is particularly effective). Just be prepared for a slightly over-long mid-section, slightly too-silly finale and slightly too gory product for a 12A certificate!
Children's Literature Films Gladiators and arenas Roman history