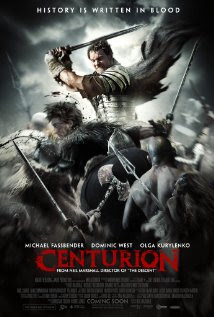 Like The Last Legion and the upcoming The Eagle, this film is centred around the ‘disappearance’ of the Roman Ninth Legion which may or may not have occurred around the north of England and south of Scotland sometime in the reign of Trajan or Hadrian (see Antoninus Pius’ blog for details). Unlike the silly, cosy, relatively-low-on-actual-blood Last Legion, Centurion goes for the bloodiest possible explanation, as the Ninth are massacred by Pict warriors.

The middle part of the plot follows the misadventures of a handful of survivors in wild Pict country. The group is likeable enough, and includes David Morissey, whose excellent reputation is well deserved, and Mickey from Doctor Who, which makes me happy because I love Mickey from Doctor Who (Noel Clarke, better known as the writer of Kidulthood and Adulthood). The group accurately reflect the wide ethnic mix of the Roman Empire and surrounding regions which is nice – it would have been nicer if writer/director Neil Marshall hadn’t felt it necessary to have a scene spelling out exactly where everyone is from, with the group’s Asian member coming from the Hindu Kush and black member from Numidia – both right on the edges or just outside the Empire. ‘Look!’ the movie seems to be saying. ‘We have a politically correct ethnic mix which is also totally historically accurate!’. Well yes, that’s great, but you lose points for shoving it in my face like that – true political correctness should go unnoticed and unremarked. And, like any wide area with lots of trade and inter-marriage, black and Asian characters could come from major urban centres like Alexandria or Rome itself, as well as from further outposts.

Marshall is known for gory horrors like Dog Soldiers and, unsurprisingly, blood and body parts are flying all over the place throughout this film. This is all very well and good during the battle scenes, but like so many screen versions of ancient Rome, this one goes rather overboard on the general violence outside the battle scenes. We are introduced to the ninth legion as they start a barroom brawl by randomly killing a man who was a bit of a sore loser in a game of arm-wrestling and Agricola demonstrates Pictish scout Etain’s prowess by having her kill one of his slaves, explaining that while trust is priceless, slaves cost nothing. Well, no, actually slaves cost money, which is why, although a Roman could kill his own slaves if he wanted to, if he killed or damaged another’s slave, he would have to pay for it. No one would waste money going through slaves just to show off someone’s fighting skills – that’s what wooden practice swords are for. And then, to add yet more injury to injury, Mickey from Doctor Who is killed by a wolf because his companion has deliberately wounded him and left him there to distract the wolf. I guess total bas****s exist in all societies, but this didn’t seem to achieve much, story-wise, other than to annoy me and make me hope for the slow, horrible death of the other guy (though, to be fair, we're not actually supposed to like this guy, and he does eventually get his comeupance).

I’m not entirely sure about the gender ethics of this film either. Like The Last Legion, Centurion tries to combine placating feminists and titillating men by introducing a warrior woman, the aforementioned Etain, played by Olga Kurylenko. Warrior women are not entirely unknown – Boudicca being the most obvious example, and even from roughly the right period – but they’re much rarer than a glance at a few recent Hollywood films would have you believe. Although a part of me loves seeing women kicking ass, I tend to find this more satisfying in forward-looking genres – like Aeryn Sun in Farscape or Trinity in The Matrix. In ancient dramas, I think in some ways it’s more interesting to explore what women could really do within the constraints of their social role – characters like Livia in I, Claudius or Lucilla in Gladiator, for example. 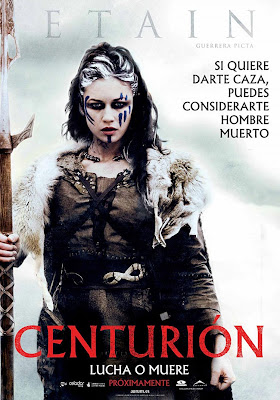 Whereas The Last Legion’s martial-arts trained Mira was a strong, likeable love interest, Etain betrays the Ninth and becomes the villain of the piece. The love interest, in contrast to Etain’s tough brunette, is a vulnerable blonde, cast aside for being a witch, who stays in her hut patching up the men’s wounds and feeding them. The only other woman in the film is an aristocratic Roman who also betrays our hero. So, tough brunettes are traitors, while blonde nurturers are what the men want. I’m sure this film isn’t trying to get a deliberate message across, but this is the impression I’m unavoidably left with.

On the other hand, Etain has definite shades of Boudicca about her, which is nice – since she’s Pictish, they really ought to have gone all out and given her red hair. She also has very good reason for hating the Romans, who raped her and her mother, cut out her tongue and killed her parents. This creates a sense of there being no real ‘heroes’ and ‘villains’, no good guys and bad guys, just the people we happen to be following and the others, which is refreshing (and means the non-battle related violence has some narrative importance, rather than just being blood for the sake of it).

The film suffers from something of a lack of plot or characterisation. Etain, thanks to her backstory and motivation, has the best developed character but dialogue is minimal and much of the film seems to be made up of walking across Scotland to get from one fight scene to the next. Imogen Poots manages to make her Arianne relatable and likeable enough, in her very short screen time, that we feel pleased when Michael Fassbender’s protagonist finds her at the film’s climax, but I watched much of the rest of the blood and gore with limited interest and little feeling. There comes a point where all the fake blood splashing around ceases to mean anything, especially if the characters it’s spurting out of feel two-dimensional.

One thing I did really like about the film, though, was the almost Odyssean feel given to Fassbender’s journey. I liked the bookended dialogue – ‘this is neither the beginning, nor the end, of my story’ – both a statement about how a single narrative can never wholly encompass someone’s life and a subtle way to indicate the Fassbender’s character probably survives his nasty injuries towards the end of the film. The way Quintus fights his way across country, gradually losing all his companions is, deliberately or not, distinctely reminiscent of Odysseus’ sea journey, which is a nice added Classical touch.

The Picts speak Gaelic, which is nice and reasonably accurate (goodness knows what Pictish sounded like, but Gaelic is as close as we’ll get. Neil Marshall admits on the extras that Welsh is probably even closer, but rightly surmises that Welsh would sound strange coming out of a Scots-accented, Pictland-dwelling people). I was amused to see Irish-raised Fassbender’s accent suddenly slip into Irish (rather than The Queen’s Latin) when he had to speak English in the middle of a stream of Gaelic, as Irish accents, especially from the North, are very close to Scots accents (unsurprising, given that the Scots came over from Ireland sometime after the Romans had left Britannia all together). In fact, he sounds slightly Irish throughout the scene in Ariane’s hut, which has the bonus effect of making him seem that much more at home there than his companions.

All in all, not a bad film, and beautifully shot. The cinematography is truly spectacular and I think I'll end up re-watching it quite frequently just for that, and for the sweeping muscial score. It was a bit lacking in depth for me, though. If I’m going to watch men beat each other up with swords for a couple of hours, I’d prefer either the depth of Gladiator, or the cheesy daftness of The Last Legion. This one is a bit too much blood and not quite enough character for my taste, though the scene where Morissey's wounded soldier is shot dead just as he thought he'd made it home is almost heartbreaking enough to redeem it. 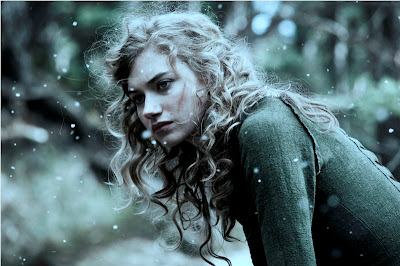 P.S. In one scene, two of our guys see a wolf on the other side of a river. It took me several seconds to work out why they were so concerned and needed to run away, because surely the wolf was about to turn into a human ally, possibly one without a great line in shirts. Or trousers, in some cases. At this point, I resolved to watch a little less supernatural fantasy and a little more straight drama for a while.
Films Ninth Legion Roman history