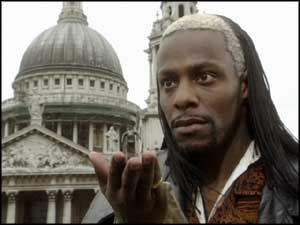 Neverwhere is both a book and a TV series - that is to say, both were written at more or less the same time, neither is an adaptation of the other. I read the book a couple of years ago, so my memory of it is a little bit fuzzy now, but I visited an old friend last weekend and we watched the whole TV show from beginning to end.

The first thing we quickly realised was that it was much newer than we thought - both of us were convinced the show must have been from the late 80s, but it turned out to have been made in 1996. The special effects, style of direction and cinematography (telematography?!) and even the style of the acting, however, could have come from any point from the 70s to the 90s, I think - my friend wondered aloud how spectacular it could be if made now. The first of two standouts, acting wise, was clearly Patterson Joseph as the Marquis de Carabas (that's why he always looks irritatingly familiar to me!) who was shorter and less skinny than the Marquis was in my head, but absolutely brilliant. We both finished the series desperate for a twenty-years-on follow-up showing us where the Marquis is now, and what he's doing - killing alligators in New York, possibly. (Joseph ought to have been the Doctor, I think - him or Adrian Lester - but I digress).

As in much of Gaiman's work, there are Classical references scattered liberally around the place. My friend is not, I think, 100% convinced of the value of Latin in the school curriculum, so I couldn't resist suggesting that if Classics was better taught in schools, our hero would have known that whenever a woman introduces herself as 'Lamia', it is time to run away very fast. The name of the ancient bogeywoman who ate children is perfect for a sultry heat-vampire (played by Tamsin Grieg, the first time I've seen her play sexy or dramatic as she's much better known now as a comedienne, though she did play mildly sinister in Doctor Who once) and Gaiman obviously likes it a lot, since he used it for the witch in Stardust as well. Oddly enough, my friend felt that this was not a situation her students were likely to come across in life, though I think there's no harm in being prepared.

Various other Classical references crop up every now and again, chiefly attributing just about every major disaster you can think of, including the mythological destructions of Atlantis and Troy, to the hired thugs, Croup and Vandemar or to the ultimate villain, Islington. The main Classical reference, though, is the Labyrinth containing the Beast, clearly modelled after the famous Cretan Labyrinth which contained the Minotaur. This being 1996, the peculiar fashion for minotaurs that I noticed last year didn't seem to have come in yet, so the beast was not half-man, half-bull, but a simple bull. To be honest, it wasn't even an especially large or menacing bull - it was quite clearly just a Highland cow, shot in shadow. This was one sequence where the book definitely had the edge over the TV series. The battle between Hunter, Richard and the Beast was exciting, scary and tragic in the book, whereas I'm afraid, on TV, it was mildly comical and far 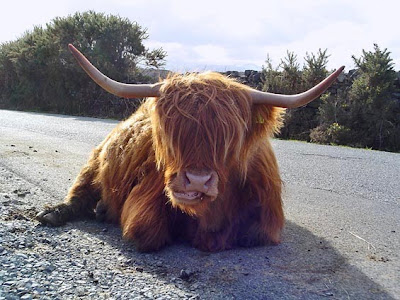 too short. I can't help thinking they should have gone for a Minotaur and used a man in costume, so they could have choreographed a proper fight, but I suppose that wouldn't fit the Beast's backstory, nor Hunter's African-beast-hunter identity. For her to pursue it, it had to be a proper beast.

A Highland cow, or coo if you're trying to do a bad Scottish accent. They're gorgeous creatures and I love them because they remind me of holidays in Scotland when I was little.
The thing that had stuck in my mind for 15 years after I first saw the TV series was Peter Capaldi's performance as the Angel Islington. I loved the idea that there was actually an Angel called Islington (being familiar with the name from Monopoly), I loved that he turned out be evil and I loved Capaldi's fabulously creepy, yet strangely serene, performance (complete with mid-90s big hair which looked a bit like a halo). The whole evil-angel thing didn't bother me because it's quite sensibly pointed out that Lucifer was an angel, so it doesn't come across as a dig at Christianity (I realise that would be an improvement for some, but not for me), but a perfectly logical idea, given the mythology.

Watching Neverwhere again, at first I was struck by how old school Doctor Who it all felt, but soon became swept up in the story, just as I was the first time (albeit occasionally jerked out of it by trying to place the various familiar faces in the cast). I think the reason I love Neverwhere it that, like Narnia but in a different tone, it blends a whole bunch of different stuff together very successfully - Christian mythology, Greek mythology, urban mythology (I love the use of old, abandoned tube 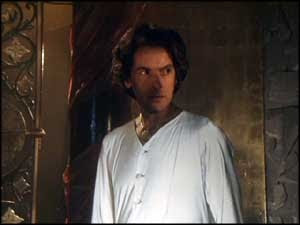 stations) and a fabulous assortment of styles, chiefly what looks gothic to me and aspects of the medieval. And it's all held together by a genuine concern about the homeless and the way people 'fall through the cracks' in our society - it's no coincidence that the TV version was co-written by Lenny Henry, the founder of Comic Relief. If you haven't come across Neverwhere, it's well worth seeking out in either book or TV form, though if you find slightly ropey special effects off-putting, you might be better off with the book!

I'm away for the weekend and will be back next week with another Spartacus review.
Mythical creatures Mythology Neil Gaiman Sci-Fi and Fantasy TV Vampires