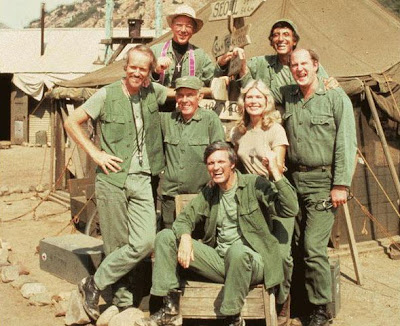 I've only seen odd episodes here and there of M*A*S*H, though it's so famous I'm fairly familiar with it - most of my knowledge at this point comes from the Internet and CurrentHousemate, who's a big fan and has the whole series on DVD.

Klinger was one of the characters I felt most familiar with because Mum used to mention him when we watched Blackadder Goes Forth (in which, in an attempt to get sent home for being mad, Blackadder puts his underpants on his head, sticks two pencils up his nostrils and says 'Wibble'). Watching the series with fresh eyes now, I do wonder exactly how wearing a dress makes one mad and feel slightly uncomfortable about the un-PCness of the whole thing, but still, it always used to make me laugh as a child, and Klinger's collection of outfits certainly is entertaining.

In the episode in question, Klinger goes further than merely wearing a dress, and actually dresses up as Cleopatra, wandering around saying things like 'All hail mighty Caesar!' at random. This costume, being much more exotic than just a dress and combined with apparent actual delusions as he not only wears the costume, but takes on the character of Cleopatra, is much more exotic than usual. There a couple of reasons for this, both within the story and from a writing point of view.

The within-story reason is that this is more than the usual vague attempt at looking silly. A new Colonel has arrived who is supposedly very tough, so Klinger has been behaving like the perfect soldier since he got there - then, suddenly, out comes the Cleopatra costume and Klinger starts raving about Caesar, all in the hope of persuading the Colonel that he's only just cracked, because the pressure has got to him. For this plan to work, the costume needed to be more exotic and exggerated than usual, to emphasise the sudden and severe mental breakdown he was pretending to have undergone (little knowing the new Colonel was actually a friend of Colonel Potter's and knew exactly what to expect).

The external reason was that, by this point in the show (in season 8) the old standby of putting Klinger in a dress had grown old. Radar had left and Klinger had taken over as clerk, and was dressing much more normally, albeit with earrings some of the time, because the sight of him in any old dress was just no longer funny. To keep the old joke alive, it needed to be used less often and more dramatically, hence the need for a much more exotic outfit, and some actual crazy acting, in addition to the costume.

So, a really exotic outfit complete with character was required, and if you want 'exotic' and female, what better than Cleopatra?! Anything overtly sexual wouldn't work for M*A*S*H, but Cleopatra has so many associations in the popular imagination that the costume alone calls to mind all sorts of things. Most importantly, she is now generally thought of (perhaps erroneously) as the most beautiful woman in the world, possibly throughout history, a Helen of Troy who has the advantage of also having been a real person. All of this makes the sight of Klinger in her costume especially funny and especially outrageous. As funny as the references to Caesar are, her Classical identity isn't really of much importance here - the fact that she was once played by Elizabeth Taylor and, in the West, represents the last word in exotic female sexuality is more to the point.

I hate practical jokes in real life and I'm not a great fan of them on TV either, so this 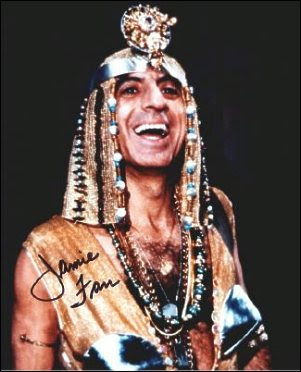 is never going to be my favourite episode of M*A*S*H (the honourable exception to this is Red Dwarf's 'Queeg' - 'jape of the decade, April, May, June, July and August fool!'). I liked it more than I thought I would though, partly because Hawkeye, BJ and Margaret get a little bit of a comeuppance for their behaviour, but mostly because this is one of the better examples of Klinger's attempts to get himself sectioned. The sheer ludicrousness of the Cleopatra costume combined with the mad-sounding dialogue in which he seems to believe he is Cleopatra removes my PC quibbles with the whole concept and allows me to sit back and enjoy the hilarity that, inevitably, ensues and Jamie Farr's performance is excellent and rib-tickling as ever. And let's face it, a hairy man dressed as Cleopatra is just always going to be funny.
Comedy Roman history TV