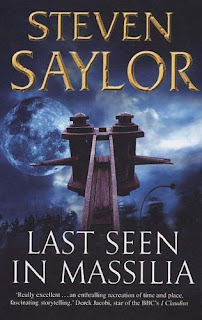 Following on from the cliffhanger at the end of Rubicon, Last Seen in Massilia follows three main plot threads; the resolution of the cliffhanger, a mystery concerning the death of a young woman and the story of the siege of Massilia by Caesar's troops. The story of the siege is true, in the general outline; the story of the young woman is an ancient fiction (Saylor mentions in his Author's Note that it comes from Lucian) and the story of Meto is, of course, modern fiction. All three are effectively told, gripping stories, though since about a third of the book is concerned with wrapping up earlier plot threads, it definitely isn't a good volume to start reading the series with!

The narrative of the siege is especially effective - Vitruvius is once again a very useful tool for explaining the mechanics of the thing and the in-story narration of the sea battle immediately calls to mind Lucan's equally gory account of the battle in his poem the Civil War. Lucan is one of my favourite ancient epic poets, so I was especially pleased to see this shout-out of sorts to him (our heroes don't witness the battle, but are told about it later by a survivor). Other elements, like the banquet in which one entire course is composed of a single olive, provide evocative snapshots of the horrors of a prolonged siege.

The tradition of the scapegoat, as outlined in the book (in which the people of Massilia would fatten up and then sacrifice one of their citizens in the hope of encouraging the gods to be more kind to the rest of them) is one of those things that I tend to be a bit sceptical about in real life - like all those various and extreme Spartan traditions that we hear about from outsiders who may have been exaggerating, or may have misunderstood. On the other hand, people do terrible things when frightened, so perahps it is true, depressing as that thought is. Hieronymous the scapegoat himself is both an extremely likeable character - these come few and far between in stories about the Late Republic! - and a very useful narrative device that ensures Gordianus and Davus do not become malnourished or even seriously threatened, for the most part, and they are able to observe the siege as outsiders even while they're within the walls. 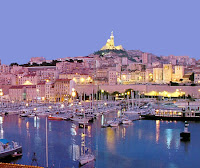 As in some of the stories in The House of Vestals, I guessed the solution to the mystery(ies) fairly early on, but could not foresee how the whole thing would resolve itself. As in the case of Rubicon, the ending is so bittersweet as to verge on the downright tragic, but lightened by another, happier resolution that cheers up the final few pages. I enjoyed this very much and I'm looking forward to the next book - which I'm sure will refer back to this one a bit - but I do hope it has a happier ending!


Marseille (Massilia) today - sadly not my picture, I haven't yet been there!
Books Gordianus Roman history