Game of Thrones, Season One 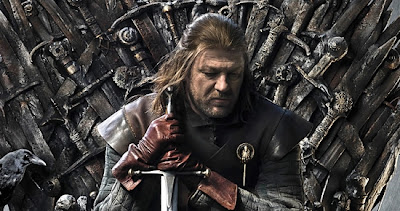 I read George RR Martin's A Game of Thrones years ago, because I got the book for free, and I can't remember very much about it, except that I vaguely enjoyed it but couldn't be bothered to read any of the rest (especially since I'd already heard that he wasn't overly speedy at getting the sequels out...). So, when the TV series starring everyone's favourite Northern Odysseus was announced, I was delighted - at last, an easy way to keep up with the story and find out what happened to everyone! I've just finished watching the first season (slightly behind the rest of the world, as usual) and am now trying to decide whether to actually read the second book, or just wait for the second season of the TV show and save myself some eye-ache (my brother's copy is in tiny, tiny print).

I pulled out my old copy of A Game of Thrones as well, and discovered an intriguing quote on the back. According to someone at the Guardian, the 'A Song of Ice and Fire' series as a whole has the ambition of constructing 'the Twelve Caesars of fantasy fiction.' This is not a claim Martin has ever made, to my knowledge, but I was mildly surprised that the person at the Guardian made the comparison - there don't, at first at least, seem to be that many similarities between the two.

The Twelve Caesars is the name commonly given to Suetonius' collection of imperial biographies, which covers the emperors from Julius Caesar to Domitian (that's Caesar, Augustus, Tiberius, Caligula, Claudius, Nero, Galba, Otho, Vitellius, Vespasian, Titus and Domitian). Each biography is a separate work, held together by style and chronology - it's not a narrative of the period, each biography is the self-contained story of a single man's life, including but not limited to his reign as emperor. Also, it's history, not fiction (I may take issue with some of what Suetonius records, but it's all real gossip, if not real fact). So far, so different. Martin does narrate his chapters from the point of view of a wide range of characters, but their stories are intertwined in a way Suetonius' stories are not.

The level of similarity between the substance of the two stories varies. The Caesars whose stories are closest to the narrative of A Game of Thrones are Julius, Augustus, Galba, Otho, Vitellius and Vespasian, because they became emperor by war. One of the things that frustrated me a little while reading A Game of Thrones was that the story seemed a bit fragmented, but the main thrust of the narrative seems to be the fight for the Iron Throne and the attempt to hold or split apart the Seven Kingdoms. There are, then, thematic similarities with the stories of those Caesars who fought over the throne. There might also be similarities with Agrippina the Younger, mother of Nero, who supposedly poisoned Claudius to get her son on the throne, and perhaps with Livia. Presumably what made the Guardian reviewer think of the Caesars - and, particularly, the Julio-Claudians - were the broad elements of dynastic power, the struggle to rule and the hints of back-stabbing and poisoning at court. Though to be honest, given that the reviewer also compared the series' characters to the Borgias (they are 'so venomous they could eat the Borgias', which is a fabulous phrase) I have a sneaking suspicion he or she may actually have been thinking of I, Claudius more than, or equally with, Suetonius. 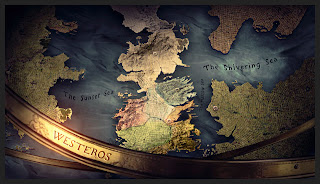 There are other elements of the series that are vaguely Classical. The Wall is the best candidate - it is quite clearly Hadrian's Wall, as the map showing the distinctly British Isles-like landscape in the opening credits clearly demonstrates. Below the Wall is the Empire of the Seven Kingdoms, with central administration (at the beginning anyway), law and order. Above the Wall, all is wilderness, barbarians who look like Tonks, death and general unpleasantness (sorry, Scotland). The maps in the book, split into North and South, look more like a weird, longish sort of country, but the map in the TV opening title sequence is unmistakably a warped version of Britain. Daenerys and Viserys' home over the Narrow Sea, on the other hand, has a distinctly Mediterranean look, but not really a Classical one, and the horse lords have more in common with Tolkien than anything else (they're a bit like a cross between the Rohirrim and the Klingons). The series' pronuniciation of 'Cersai' also sounds rather like 'Circe', the Classical witch, which seems sort of appropriate.

I suspect what really made the Guardian book reviewer think of the Caesars, though, was the repeated references to mad kings and incest (usually in combination with each other). There's a reason the Mad Monarch trope is listed on TV Tropes as 'the Caligula'. Little Boots is far from the only mad monarch who suffered from a mental illness that may or may not have been the result of inbreeding (it's equally possible it was something to do with the serious illness that nearly killed him early in his reign) but he certainly seems to be the best known. Whether this is because of all the rumours of incest with his sisters, the idea that he wanted to make a horse a consul, his declaring war on Neptune and taking sea shells as bounty or simply John Hurt's eye-scalding, unforgettable performance in a gold bikini in I, Claudius, Caligula is the byword for monarchical madness. The specific nature of Aerys Targaryen's madness is often left unspecified (though I did miss an episode, so let me know if I'm missing some detail!) but Harry Lloyd's fantastically creepy performance as the mad king's mad son, under his peroxide blonde wig, seems to have more than a little of the Caligula about it. And then at the end we get Joffrey, the product of incest, also extremely blonde, and mean and ruthless to the point of slightly unbalanced.

I'm not sure what the Caesars would think of the idea that utter madness is what they're remembered for the most, but between Caligula, the less mad but certainly not all together with it Nero and the downright unpleasant Domitian, I suspect it is this that really reminds people of the Caesars in Game of Thrones. So far, I'm only up to the end of the first book/season, but I eagerly await the promotion of horses to important political positions in the stories to come...
Game of Thrones Roman history Sci-Fi and Fantasy TV