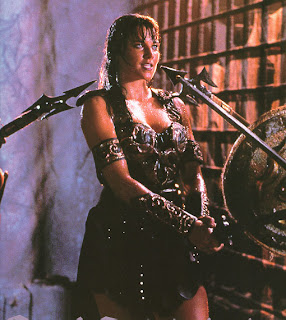 Xena tries its hand at the old inescapable-dungeon storyline - this episode is a good yarn, though how much you like it will depend on how fond you are of improbable combat tricks.

Hints of Roman influence start to make themselves felt just a little in this episode. Xerxes' armour has a certain Roman-ish look to it, without actually being Roman - it's perhaps a bit more Roman than the usual pseudo-medieval stuff. The episode opens with a sort of pastiche of Kubrick's 'I'm Spartacus!' scene in which everyone in the Village of the Week claims to be the Black Wolf, which is a neat and quick way to tell the audience whose side we should be on.

'Xerxes' was the name of the Persian king who tried unsuccessfully to invade Greece, coming up against first the Three Hundred and later the Athenian fleet at Salamis. There's no real link with the tyrant here, but the idea of Xerxes as a tyrannical king and enemy seems roughly appropriate. There are a couple of mythological characters called Diomedes; one was the mythological owner of man-eating horses who was fed to them himself by Hercules, so there's no connection there, while the other was a friend of Odysseus' who famously has an entire Book of the Iliad devoted to his military glory (thanks to DemetriosX for reminding me about him). Whether there's any connection with him is unclear.

Xerxes' palace looks like Mont-St-Michel but without the water, which is no way Classical, obviously, but it's rather nice. I could live there.

There were some rather dodgy moments in this episode. Much as I enjoyed Xena and Koulos' fake fight, the bit where she spun him around looked seriously daft, though it was nothing compared to her flying leap directly upwards from out of a well... On the other hand, this show has a great sense of humour, so I think I'll start including a 'quotes' section in these write-ups - they're not terribly Classical necessarily but I want to start storing these for future reference! 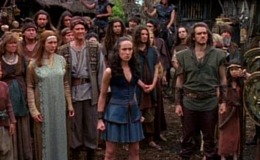 Salmoneus: I got fifteen belts, four robes and three proposals...

The Wolf Pack. Not literally; for once, it's just a metaphor!