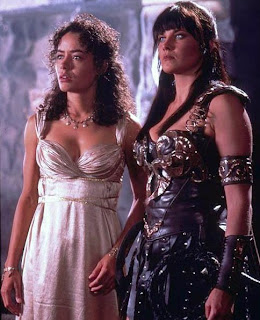 Xena does the Trojan War, and does it really rather well - I wish this had been a two-parter rather than a single episode, because there's some good stuff here, and it seems a shame to whizz over a ten-year war in 45 minutes. There are some mildly gross images with skeletons, torture wheels, skulls and giagantic - OK, not Shelob gigantic but, you know, big - spiders towards the beginning of the episode, which is a good indication that this will be one of those stories that is slightly more serious in tone. There's a great shot later on of the horse with a skeleton in the foreground as well. This episode's director was obviously inspired by the material.

I love the casting of Helen. Casting the most beautiful woman in the world is totally impossible because no two people are likely to agree on who that woman is, since everyone has different tastes and preferences. However, faced with this dilemma, too often casting directors, with boring predictability, go for someone skinny, blonde, blue-eyed and pale, on the grounds that these things are, by definition, 'beautiful.' Galyn Gorg is skinny as usual, but she's dark-haired, brown-eyed and black which makes a very pleasant change.

Paris is a total prat, as always. He orders Helen to sleep and not to have nightmares because not sleeping properly will reduce her beauty and that's what he's fighting for. Charming. Sure, if we're following the traditional myth of the Judgment of Paris, we all know he's only interested in her looks, but actually saying so to her face is needlessly tactless. And unlikely to help with the nightmares. Every retelling of the story of the Trojan War includes numerous alterations, different emphases, different angles... but however his prattishness manifests itself, Paris is always a prat.

Xena and Helen have a great conversation in which Xena asks what Helen wants to do and Helen says no one's ever asked her that before. I've always felt rather sorry for Helen, who mostly gets thrown around between men like a piece of especially appealing cheese and Xena, appropriately for a show with two female leads, puts Helen front and centre of the story. Helen's weariness with Paris and with the war as a whole goes back to the Iliad, but is given more weight here, and Gorg plays it beautifully.

I also love the re-writing of the whole Trojan Horse incident as the result of Deiphobus' treachery. I've written before about how difficult it is to do this both literally and plausibly, and this more or less manages it, since the Trojans are reassured by a trusted warrior that all is well. The mythological Deiphobus is usually a loyal son of Priam who marries Helen after Paris dies, and is killed when the Greeks break in, in some versions possibly by Helen herself. Xena picks up on this by having Deiphobus murder Paris, abduct Helen and snarl 'what does every man want from Helen of Troy?' at her. Basically, the show manages to find a reasonably family-friendly way of actually foregrounding the undercurrent of the rape and subjugation of women, who are valued only for their beauty, that underpins the whole Trojan War myth.

Gabrielle's subplot with her former fiancee is a bit weaker, mainly because her protests along the lines of 'you're not a warrior!' seem spectacularly hypocritical. Also, he's a bit slow on the uptake ('Deiphobus has taken Helen!' 'Why?') Their relationship is quite sweet though.

The feminist agenda gets a wee bit anvilicious in Xena and Helen's final conversation ('You showed me the only person that can make me happy is me' - yes, we got it, thanks) but overall this is a really good re-telling of the Trojan war story that emphasises aspects of the myth that sometimes get swept aside in versions that focus on the battles and warriors - and the Greeks, for that matter, who barely appear. I was starting to worry about the director's obsession with skeletons and skulls by the end, but otherwise, excellent work, 9/10. 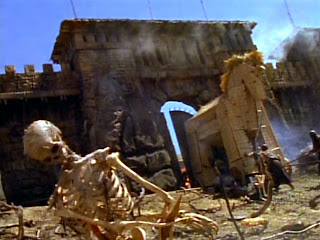 Xena: Beware Greeks bearing gifts, Paris (I just love that she actually got to say it!)

Disclaimer: No Polynesian-style Bamboo Horses were harmed during the production of this motion picture. However, many wicker lawn chairs gave their lives.
Mythology Sci-Fi and Fantasy Trojan War TV Xena