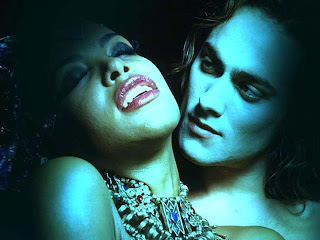 This is a fun film, which is better than its reputation suggests. The less well known or well thought of film based on Anne Rice's novels, it's pretty good fun in its own way and I actually enjoyed it slightly more than Interview with the Vampire, good as Interview is. Its biggest problem is, basically, that it doesn't star Tom Cruise, who may be a bit eccentric, but who has a really great screen presence.

Anne Rice has come up with some great plots and characters over the years, and her vampire mythology is visible, in one way or another, in most of the soppier kind of vampire literature since (though not, obviously, in more horror-centric vampire stories like Let the Right One In, which is a different thing entirely). In particular, she gave the world the story of the two vampires, one dark-haired, broody and tortured, the other blond, fun-loving and snarky, with lots of homoerotic tension between them, fighting over the affection of a small blonde girl. Granted, her small blonde girl was a prepubescent vampire, but still, the set-up is there, and like all other iterations of this story since, the blonder, more evil vampire is much, much more interesting than the tortured one. If the sequel to Interview with the Vampire had taken up where Tom Cruise's Lestat left off, summing up the feelings of much of the audience as he shares his exasperation over Louis' constant whining, it would have been great.

Unfortunately, this sequel in places falls victim to the same thing that I find most off-putting about Rice's novels, and about her creation Louis' character - it's full of melodramatic prose about eternity (though I think it was thankfully free of too much stuff about the Dark Gift). Stuart Townsend, otherwise known as the Man Who Would Be Aragorn, does his best with Lestat and he's got the grin and the rock star enthusiasm down, but he's lacking the sheer joie de mourir of Cruise's Lestat (and the less said about his wavering accent, the better). This isn't entirely his fault - the plot and dialogue insist on giving Lestat elements of the moping and self-pity that belonged to Louis in the first film, though at least the emphasis on his loneliness and desire for companionship, along with a continued emphasis on choice when it comes to making new vampires in contrast to his lack of same, ensure that he still feels like the same character. His sudden obsession with a particular mortal girl is not entirely unexpected, but also hard to buy given his previous psychotic temperament. Overall, a film about a vampire rock star ought to make said vampire a bit more funny and a bit less tortured. (And he looks really, really similar to Keira Knightley, which is not his fault either, but it's off-putting).

The titular 'Queen of the Damned' is Akasha, played by Aaliyah shortly before she was tragically killed in a plane crash. The movie's dialogue mentions Akasha and her husband Enkil ruling over ancient Egypt. Quite why, if this is the case, they have Near Eastern names (Enkil is a Sumerian god, and Akasha appears to be a Sanskrit word) is a bit of a mystery - perhaps they were created in the Middle East and then went to Egypt. I do like the note that these two can walk in the sun, as I had been wondering how they managed to rule Egypt in a time before electric light without encountering the sun at some point (I don't think a Pharaoh who only came out at night would hold power for very long!). Akasha is great fun - a proper vampire villain with lots of blood lust and the ability to burn other vampires with a wave of her hand. I also like the combination of her old-fashioned world views - her attachment to absolute monarchy and especially her non-feminist insistence that her husband and king be addressed first - with her fondness for rock music, which was apparently strong enough to wake her from several millennia as a statue.

Akasha isn't the only ancient vampire in this film - Marius, who must be Roman from the name, is said to have been born somewhere around 400 BC. This would make him very old even for a Roman - not impossibly so, but in this version he comes from a period of Roman Republican history that we know very little about (as opposed to the novel Pandora, which makes him early Imperial, a period we know lots about - I think this is the result of the film combining two characters from the books, Magnus and Marius). Marius here has somehow managed to drag himself as far as the seventeenth century, but not beyond - he makes Lestat because he needs someone to help him acclimatise to the eighteenth century, and when he meets Lestat again he's still wearing the same style of clothing, as Lestat observes. I rather like the idea that he's managed to change with the times up to a point, but reaches a line where he just can't do it any more, though I would have thought he might have reached that point earlier than the eighteenth century!

There are other ancient vampires scattered around this film as well - Pandora (who, confusingly, is killed off here, which doesn't fit with the novel) is played by none other than Aeryn Sun, and the name 'Maharet' sounds vaguely ancient Near Eastern to me, though I can't think of a specific instance of the name. In fact, I think they are a group called the Ancients from Rice's vampire mythology, but though the movie mentions the name briefly, you don't get a great sense of who they are or what they're about other than that Marius seems to be keeping an eye on the petrified King and Queen. None of them really show any particularly ancient qualities, though Pandora doesn't seem to have changed her clothing style much in the last two thousand years. They mostly seem to hang around a dusty old house in America, worrying and collecting porcelain dolls. Anne Rice vampires seriously need to learn how to get out and have some fun. 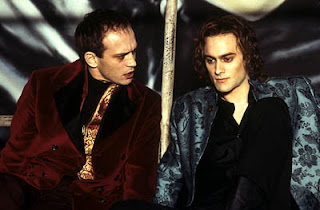 I enjoyed this film more than I thought I would, some really dodgy attempts at British accents aside, and it's quite fun. It should probably be essential viewing for any Buffy or True Blood fans who haven't the time or inclination to read the books, since an awful lot of those other mythologies originates here - the Watcher's Council/Talamasca and the blood tears in particular. And Paul McGann is in it, and that's always a good thing. It also doesn't take itself quite as seriously as Interview with the Vampire does, which is a point in its favour - but given that its about an ancient vampire woken by a love of rock music, it maybe needed to lighten up even more, and embrace its own silliness with even more enthusiasm.
Ancient Near East Egyptology Films Sci-Fi and Fantasy Vampires