The Sword in the Stone (Disney, dir. Wolfgang Reitherman, 1963) 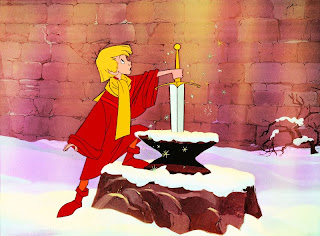 I used to love this film when I was little. Back when we used to go visit Mum's friend and her daugher - she and my brother were both 5, her little brother was 2, I was light years ahead of them at 8 - it was my third favourite video to watch while I hung around by myself feeling old and superior (behind The Little Mermaid and Disney's Robin Hood). Watching it again last night, it's surprisingly short - only an hour and a quarter - and really drags in some sections, especially the squirrel bit. It's a lovely film though. Despite including a worse attempt at a British accent than Dick van Dyke (Kay), it's got all the wonderful charm that all those old Disney movies that open with a big book of fairy stories have.

There are a couple of direct Classical references in the film - Merlin mentions both history in general and more specifically Latin as essential parts of a well-rounded education and the owl is called Archimedes, after the philosopher who said he could move the world with a big enough lever and jumped out of the bath yelling 'Eureka!' What's more interesting, though is the attitude to learning and to the past in general.

I read the book a few years ago and my memory of it is a bit vague, but as far as I recall, in the book, Merlin's memory actually worked backwards (according to Wikipedia he was actually living backwards). He could remember all about the future but nothing of the past. The film simplifies it a bit - Merlin can travel to the future and can prophesy, but his memory of the past doesn't seem to be affected (though his short term memory isn't great!). What the film does which I think is interesting is set up a direct opposition between Merlin and Archimedes, who I think was invented for the film, partly to be the comic relief.

Archimedes has a Classical name and appears in the form of the patron bird of ancient Athens - this is largely because owls are supposed to be wise, but owls are supposed to be wise because they're associated with Athena, goddess of wisdom, so basically, he's a Classical bird. While Merlin is obsessed with the future, both Wart's future and the long-off innovations of steam trains and aeroplanes, Archimedes is interested, largely, in the past and in what can be learned from the past. Although the viewer is encouraged to sympathise with Merlin in particular, Archimedes has a role to play too. Without Archimedes, for all Merlin's talk about learning French and Latin, Wart would not have got around to learning to read and write, and while Merlin is so obsessed with what Wart could be he flies off in a huff at Wart's lack of ambition, Archimedes supports Wart in what he needs in the present - leading to the discovery that Wart can pull the sword from the stone. Learning from the past and living in the present are just as important as planning for the future, and the pseudo-Classical Archimedes represents that. 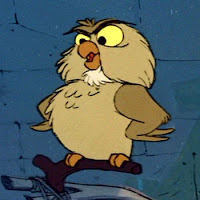 I always liked Archimedes and I like him even more now - Merlin, who insists to Wart that he has problems when Wart is quite happy and doesn't think he has any, is really quite annoying! Granted, Wart couldn't see the wolf that was trying to eat him, which is a pretty major problem, but still. I'd take Archimedes over Merlin as a teacher any day!
Classics and Classicists Disney Films