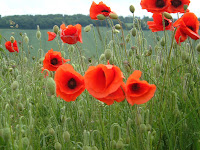 Apologies for the slight delay with the latest blog post. I've come down with some nasty winter bug, so haven't been able to get a fresh post written up just yet. Normal service will resume shortly, and upcoming attractions will include a Couch Potato-style viewing of the Clive Owen-starring King Arthur featuring OldHousemate(theRomeone) and OldestMaleFriend, a review of the radio play of Lindsey Davis' Poseidon's Gold and a look at one of Star Trek's least finest hours (taboo-breaking kissing aside), 'Plato's Stepchildren'.

In the meantime, I thought I'd offer a few posts from the archives; some classic British comedy:
Yes, Minister: The Bed of Nails
Yes, Prime Minister: The National Education Service
The Brittas Empire: Not a Good Day
The Black Adder
Blackadder the Third
Blackadder: Back and Forth