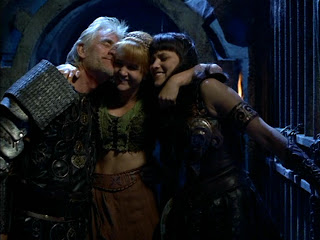 This episode follows the near-execution of Gabrielle’s friend Meleager on a false charge by a judge who really doesn’t like to change his mind.

Meleager is a figure from Classical mythology, though his myth doesn’t have anything to do with his story here. The mythical Meleager was to stay alive as long as a brand on the fire. Having killed the Calydonian boar, Meleager killed his uncles (whether accidentally or on purpose depends on which version you’re reading) so his mother burned the rest of the brand and Meleager died.

The way Meleager here thinks he’s guilty when in fact he’s innocent might bear some relation to some versions of his story but really, this is an independent tale. The depiction of Meleager as a hero who goes around saving villages all the time is rather nice and vaguely fits with the fact he rid the world of the pesky Calydonian boar. Similarly, the mythical Meleager fell in love with Atalanta, a virgin huntress who’d been raised by bears and who killed various unpleasant centaurs etc, so it makes sense that he’d get on well with Gabrielle, though here he sees her as a daughter rather than a lover.

This was an interesting episode, most particularly for the moment when Gabrielle defies Xena to defend her friend. This at the same time marks her out as becoming more independent of Xena, while simultaneously reinforcing her dependency, since she’s motivated to do it by hero worship for someone else. Xena forces her to confront her tendency towards putting people on pedestals, though the fact that Meleager turns out to be innocent after all may have wiped that particular lesson!

Being based around an execution, the episode has a fairly dark tone, brought out unexpectedly in the closing lines.

Gabrielle: When I’m that age, I hope I’m knitting socks.
Xena: Oh don’t worry about it. People in our line of work never reach that age.
Gabrielle: That’s a comforting thought.

Buffy had all sorts of angst about the short life expectancy of Slayers. Perhaps, since Xena and Gabrielle have chosen this lifestyle, they’re less woe-is-me about it, but it does seem that Gabrielle hasn’t quite thought it through, which doesn’t bode too well for the future…

Side note: love the knitting women waiting for the execution. Very French Revolution.

Gabrielle: Whatever he did, he didn’t do it!

Gabrielle: Consider this; when we doubt that heroes exist in this world, who do the optimists name?
Some random: Hercules!

Executioner (looking exactly like Death from an Ingmar Berman film): These are my comfortable clothes.

Note: By popular demand “The Executioner” will bring back his comfortable lightweight cotton-flax blend robe in a variety of spring colours.