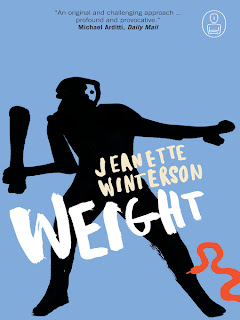 Weight is part of Canongate publishing's series The Myths, a series of (fairly short) novels retelling myths in innovative ways, which includes Margaret Atwood's The Penelopiad. Weight is a particularly short novel, and reads more like an extended prose poem than a story, though there certainly is plot and action in there.

Although nominally focused on Atlas, Weight also includes substantial material on Heracles, and Heracles (with Greek spelling - because even when your only source is Robert Graves, it looks more authentic with the Greek spelling!) is the liveliest, most interesting and most memorable character. His dialogue sparkles - well, maybe 'sparkles' is the wrong word - and he feels like a truly complete character. Atlas suffers a bit by comparison, being much less lively, but is reasonably sympathetic, which is essential to making the story work.

Some parts of the book didn't entirely work for me. The narrative perspective jumps around all over the place, and although I liked some of the astrological and cosmological sections towards the beginning and end, the sections where the story suddenly slips into a first-person, pseudo-autobiographical account of the narrator's childhood globe and parental issues left me pretty cold. Myth works perfectly well as a metaphor in itself (the final letting-go is especially satisfying) - it doesn't need these over-thought, overly poetical bits of introspection and naval-gazing interrupting the flow of the story. I also could have lived without some of the sexual content, not because I'm particularly prudish (I am, after all, a fan of both Spartacus: Blood and Sand and True Blood) but because it often seemed both unnecessary and, at one point, implausible. I absolutely loved the section where Atlas rescues poor Laika the Russian space dog though.

I rather liked the intensely poetic feel to this story and somehow the strange mash-up of realistic astronomy and mythology actually works, for the most part. Although I love poetry, this sort of self-consciously literary fiction (I hate that way of branding fiction, as if everything written for pleasure and to entertain the reader is somehow worthless, but I can't think of another way to describe it) isn't really my thing, but still, I enjoyed this, and have resolved to read some more of Winterson's better-known work (probably starting with Oranges are not the Only Fruit).
Books Mythology