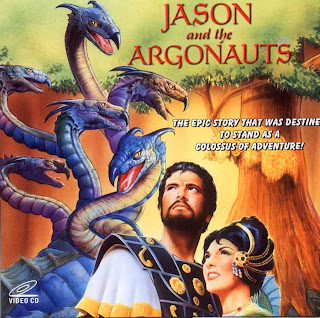 The classic film version of the story of Jason and the Argonauts - though I quite enjoyed the more recent TV movie as well. But you can't beat those fighting skeletons for sheer wow-factor. I have a mild preference for models and stop-motion over CGI (within reason - Gollum had to be CGI) so I just love watching these. OK, they're a bit stilted, but CGI is too smooth, so you win some, you lose some.

I think one of the advantages of the story of Jason and the Argonauts for film-makers is that it's the closest of the Greek myths to the central and northern European folk-tales and fairy tales many of us - in Britain, anyway - grew up with. There's no war, and our hero is not a battle-scarred veteran who loses most of his crew, no one gets seduced by a swan or a bull or a shower of gold and no one sleeps with their mother. On the other hand, there is a dragon, there's a quest for a magical item, an evil king (or two) and a princess with magical powers. I wasn't very familiar with Greek myths when I was little (just the Odyssey, and the school production of Oedipus Rex which I think I've mentioned before) so it's films of Jason's story that, to me, feel the most like the sort of fantastical adventures I used to enjoy as a child (though I have to confess, the idea of a magic golden bit of wool has always struck me as a bit too ridiculous. But my favourite films are about destroying a bit of magic golden jewelry, so what do I know).

There are some different problems with the Jason myth for modern writers, though. A friend of mine gave a very interesting paper a while back about re-tellings of the Jason myth for children. She pointed out that in Greek myth, Jason is helped in many of his adventures by Hera or by Medea, whereas in the modern childrens' versions, he is much more proactive, and needs much less outside (female) help to get through. In the case of this film, he's helped by Hera during the first part of the story, but Zeus imposes a limitation on the number of times she can help him. By the time he meets Medea, he's run out and Medea takes over, though with more limitations. This effectively limits the power of the female character, even when that character is a goddess, while making Jason, whose strength and abilities are consistent, seem somehow stronger, even as he's being helped. He also asserts his independence to Zeus's face at one point, proudly declaring he doesn't need the gods' help. Whereas in a more modern production, like the recent Clash of the Titans, this would be part of a secular declaration against relying on or obeying the whim of the gods, here it comes across more as a statement of strength and independence from the hero, of which Zeus approves and which actually encourages Zeus to help him more.

The other problem with Jason's story is what to do with Medea. Anyone who knows any Greek mythology will know that she is a wicked witch with a penchant for infanticide (in some versions, not only does she kill her own children - an innovation by Euripides that stuck - but she kills her infant brother as well). On the other hand, anyone who does not know what happens after the end of the story of the Argo will see Medea clearly as the love interest and will expect her to be presented as such - i.e., she should be nice! The challenge is to find a way to cater to both those audiences.The overall effect is often that Medea becomes a much more interesting character than your average family-adventure heroine. She can certainly look after herself (though not too much; the film adds a sequence where Jason has to use the fleece to bring her back from the dead, thus reasserting his masculinity and his right to be the hero) and there is an edge to Medea that less three-dimensional princesses tend to lack. Some of Medea's achievements are given to Hera in this film (notably Talos) while others are left out as being too wicked (killing her brother, for example) but she still emerges as a complex and highly watchable character.

The ending to Jason and Medea's story is done quite well here, I think. The film ends with Zeus and Hera watching Jason and Medea embrace, and Hera says that 'The game is over' (the gods have been playing with the humans in a giant living board game, which is a fantastic visual). Zeus replies that 'It certainly is not,' but he adds, watching the couple 'For the moment, let them enjoy a calm sea...' Fans of Greek myth will know what's coming, while anyone who doesn't know the story can assume whatever upcoming troubles they like.

Hercules and Hylas' relationship, unsurprisingly for 1963, has been altered so that rather than being lovers, they develop the kind of affection based on mutual admiration and on one of them beating the other in a contest that is beloved of buddy movies and films about Robin Hood. I particularly liked Hylas' brain-over-brawn method of defeating Hercules in a discus-throwing contest, by skimming it instead of just throwing it. Hera's dislike of Hercules is also skimmed over, so the whole section in which Hylas is killed and Hercules left behind seems rather brutal, but it does give the film some extra grit, in a way (as the even more brutal scene of Pelias killing Jason's sister does at the beginning as well).

The main point of this film is not really character though, reasonably well-drawn as the characters are for the most part. This is a showcase for Harryhausen's special effects, and they are amazing. The Harpies, Talos and the skeletons (interpreted that way for the film - they were regular soldiers in Greek myth) are all very impressive and although giant gods don't really do it for me, they look pretty good. The gods in general are probably done as well as one can show a bunch of immortal beings sitting around all day, interfering in people's lives. The board game idea is a really nice way of seeing the gods literally playing with human beings, Honor Blackman makes a good Hera (coming across much better than she often does in Greek myth here, since she actually likes Jason!) and there's a fantastic shot of Hera, covered in a black cloak, startling Pelias' horse. It looks almost like something out of a horror movie.

Talking of Pelias, we never do find out what happens to him. It feels a bit like there was supposed to be a sequel and it never got made - although the ambiguous ending of Jason and Medea's story is quite effective, the lack of payoff with Pelias just feels, well, unfinished. 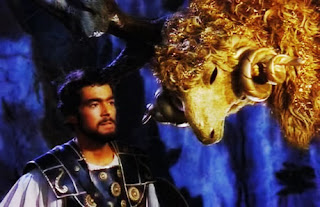 Monsters have never really been my thing and for me, this drags a little in places. But there's no denying that these particular monsters are something pretty special, and the film is lifted with wonderful moments of humour too, including Phineas' response to the question 'What are the Clashing Rocks?' - 'They speak for themselves, don't they?!' (he'd never have put the tagline 'Titans Will Clash' on Clash of the Titans). The film is great fun and a fantastic showcase for Harryhausen - just make sure you have some version of Medea's story to hand to finish the plot off at the end!