I've often wondered who is the most famous Roman of them all - Pontius Pilate or Julius Caesar. Pilate has got to be one of the best known to Christians, and millions recite his name every week, if they happen to belong to a denomination that recites the Nicene Creed regularly. But outside Christian culture, Julius Caesar must be the best known Roman of all time. In addition to a month which either he or Augustus had named after himself (July), he's had all sorts of things named after him, from political positions (Kaisar, Tsar) to methods of child delivery, to salads. If something not particularly connected to Classics or the ancient world is going to randomly throw something Classical into the mix, chances are high they'll be bunging in a reference to Caesar. So, to commemorate (or celebrate, depending on your ancient Roman political persuasion) the two thousand and fifty-sixth anniversary of his death, I've collected some of my personal favourite random references to Julius Caesar from all over pop culture.

5. Buffy the Vampire Slayer, 'Pangs', 'That's what Caesar did...'
What's the reference? SPIKE: (In reference to the conquest of America)... that's what conquering nations do. That's what Caesar did, and he's not going around saying, "I came, I conquered, I feel really bad about it"!'
Referring to? The inscriptions displayed during Caesar's triumph for the very short Pontic War: VENI, VIDI, VICI, 'I came, I saw, I conquered.'
How random? Well, it's not really, which is why it's down at No. 5 on this list even though it's probably my favourite of all these references. Spike is making a difficult but necessary point and the Romans are a particularly useful tool for him to use to make it, as I discussed when I blogged about it. But I love it far too much to leave it out.
What would Caesar think? He'd agree wholeheartedly with Spike. Caesar and Spike would get on really well, I think.

4. The West Wing, '18th and Potomac', 'Caesar's wife'
What's the reference? MRS LANDINGHAM: (Insisting on paying sticker price for a new car, wagging finger) Caesar's wife must be above reproach.
Referring to? Caesar's wife Pompeia was suspected of having an affair with Publius Clodius, and Clodius had spied on her during a women's-only festival. Caesar divorced Pompeia. Clodius was then put on trial for sacrilege, but when called to testify, Caesar said he knew nothing about it, so he was asked why he divorced his wife if that was the case. This is a loose translation of his reply, which was that he thought his wife should never be so much as suspected of any wrongdoing. (They can't have got on very well. He refused to divorce his first wife even when she was connected with the losing side in a civil war and the winner was trying to get him to divorce her, so he wasn't always so quick to get rid of wives, as long as they were useful and he didn't think they were cheating on him!).
How random? Well, there's something about the image of Mrs Landingham as Bartlett's 'wife' that's really disturbing... The point makes sense, though everyone around Mrs Landingham thinks she's mad. The whole thing's no more than a set-up for her sudden death while driving said new car at the end of the episode anyway.
What would Caesar think? He wouldn't be paying any attention to Mrs Landingham, he'd be too busy trying to seduce Nancy (the blonde White House employee played by Sheen's daughter).

3. Blackadder the Third, 'Sense and Senility', 'Look behind you Mr Caesar!'
What's the reference? Prince George has been thoroughly traumatised by seeing a play in which Julius Caesar was murdered right there on the stage in front of him, and no matter how much Blackadder tries to explain the concept of 'acting' to him, he can't get anywhere. This includes the following exchange:
BLACKADDER: the man playing Julius Caesar was an actor, called Kemp.
PRINCE GEORGE: Thundering gherkins! Brutus must have pretty miffed when he found out.
Referring to? The murder of Julius Caesar, two thousand and fifty-six years ago today. And Shakespeare's theatrical version of it.
How random? Not really too random, any episode about the theatre is bound to throw in some Shakespeare, and Julius Caesar is one of his most famous plays. Prince George's decision to dress in a toga for all public speaking engagements is more random.
What would Caesar think? He'd wonder what on Earth Prince George was doing running an Empire. 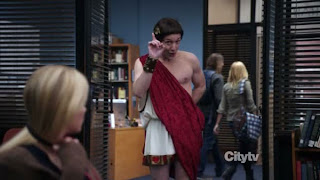 2. Community, 'Paradigms of Human Memory', 'Caesar Salad Day'
What's the reference? In a clip show that's not a clip show, we see the Dean entering the study room in a variety of fancy dress outfits, all on rather flimsy excuses. Among other things, he wears a tunic, a bit of red velvet and a laurel wreath to celebrate Caesar Salad Day.
Referring to? OK, this one is cheating a bit as this could be a reference to any Caesar. But I think, generally speaking, if you hear the name 'Caesar' without any other context, you think Julius. Well, I do anyway.
How random? Very, even by Community's standards. The bonkers-ness of this outfit is still beaten, though, by the woman's nineteenth-century Southern belle outfit, complete with bonnet, parasol and huge dress - for a cotillion - that he wears to celebrate getting new windows (calling it 'Gone With the Windows').
What would Caesar think? He'd think Community was one of the weirdest shows ever made. But also one of the most awesome.

1. Aladdin, 'Et tu Brute'
What's the reference? More salad. As the Genie looks into the process of making Aladdin a Prince, he opens a big book of 'Royal Recipes' and pulls out various items relating to the recipes, e.g. when he gets to Chicken a la King, he pulls out a chicken wearing a crown. When he gets to Caesar Salad, a big arm comes right out of the book holding a knife and the Genie, momentarily wearing a laurel wreath and white bit of tunic, gasps 'Et tu Brute!' and quickly turns the page. It took me years to work out what he was saying there.
Referring to? Caesar's death and his much-debated Famous Last Words.
How random? This is a cartoon visualising a bit of Robin Williams improv. It's completely random. And that's why it's top of this list. Plus, Aladdin rules.
What would Caesar think? He'd be busy desperately trying to keep up with Robin Williams' stream of comic genius. Latin is a much simpler language than English and requires far fewer words - Robin Williams in Latin would be weird and he must be really hard to follow for anyone whose English isn't completely fluent.... (On the other hand, if you're in the mood for some Latin comedy, Eddie Izzard in Latin is available here, though the title is mis-spelled). 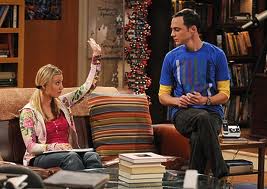 Honourable mention: Sheldon on The Big Bang Theory has referred to Caesar a few times, in an expression ('Great Caesar's ghost!') and quoting lines from Shakespeare's Julius Caesar ('Cry havoc, and let slip the dogs of war!'). But my favourite Classical reference of Sheldon's, which is of course quite logical but totally baffling to his audience of one, is his repeated attempt to teach Penny physics in 'The Gorilla Experiment' from the very beginning, i.e. from ancient philosophy onwards. All Penny wants is to understand what her boyfriend does for a living, but Sheldon just keeps saying 'It's a warm summer evening in Ancient Greece...' and making her note down what an agora is. It's funny because it's true.