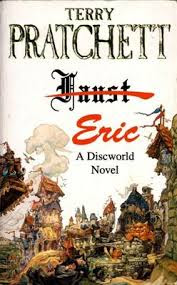 The front cover of my old edition of Eric has the word 'Faust' in German Gothic lettering, crossed out with 'Eric' scrawled next to it (and 'Terry Pratchett' in big gold letters, which is ironic since there's a joke in the book about bad novels in which the author's name is in big gold letters on the cover). It is, as this implies, a loose (very loose) re-working of Dr Faustus, and makes several jokes about what would happen to a face that launched a thousand ships. Young Eric Thursley tries to summon a demon to grant him three wishes, but ends up with Rincewind instead (who had been running around Hell for reasons relating to the conclusion of Sourcery). Thanks to the machinations of a demon usurper, Rincewind finds himself granting Eric's three wishes in the usual you-don't-quite-get-what-you-wanted way.

Eric's first wish, to be ruler of all the nations, takes them to a jungle civilization who intend to sacrifice their ultimate ruler to their god, a demon of a kind similar to the fear-demon from Buffy's 'Fear, Itself'. There isn't much in the way of Classical elements here, but Eric does make the same mistake I used to make as a child (OK, as an 18-year-old). He thinks the jungle - the Discworld equivalent of the Amazon - will contain Amazonian princesses, the mythical female warrior tribe of ancient Greece. For years and years - all the time I studied A Midsummer Night's Dream - I wondered how on earth Hippolyta and the other Amazons got all the way from South America to Greece. (I often used to get geographically confused in this way - when I was about ten, I read the Babysitter's Club books but assumed that they were set in England, because I lived in England, and wondered how it was possible to catch a train to New York...).

Eric's second wish is to meet the most beautiful woman who has ever lived, which of course takes him to the Discworld's Helen of Troy, Elenor of Tsort (or possibly Ephebe). However, he is in for a disappointment, as Elenor, ten years on from her journey to Tsort, is now a middle-aged ordinary-looking woman with a bit of a moustache and many, many children. Some of her appearance is down to the passage of ten years, but the narrative also implies that she wasn't actually that beautiful in the first place and a lot of the stories are down to poetic exaggeration. I think the idea that her dowdy appearance is due to the passage of time is more fun and interesting, since it plays on an obvious flaw in the tale; poetic exaggeration is a more common idea that could be applied to anything really.

While in Tsort, Rincewind and Eric inadvertently let in the Ephebian army and burn down the city, thus ending the war and granting victory to the Ephebians. The Horse is in the story, but the Tsorteans are not fooled by it for one moment since it is such a ridiculous idea. Exactly what happens to Elenor in the end is unclear - she wanted to stay in Tsort, but since it burned down, presumably she went back to Ephebe.

Naturally, since the Horse is around, we meet the Discworld version of Odysseus, who is called Lavaeolus, and is an ancestor of Rincewind. The name is translated within the book as 'Rinser-of winds' and it was pointed out in the comments a while ago that this comes from 'lavo' (Latin 'I wash') and Aeolus, master of the winds. The suggestion of a connection between Rincewind and Odysseus is interesting. There's a certain logic to it - Odysseus did try to get out of the war by pretending to be mad and does have a penchant for the less fighty, more intriguy aspects of warfare, carrying out night raids on the enemy camp and coming up with the Horse idea. But, to me, it just doesn't quite work - Rincewind's reaction to everything is simply to run away, with very little thought about what's going on, while the point of Odysseus' character is that he is the brain-over-brawn guy, which doesn't necessarily make him cowardly (and he certainly wasn't the only one who tried to get out of the war), just clever and a little bit sneaky. Perhaps the essential problem is really that Odysseus is one of my favourite characters from mythology, while Rincewind is one of my least favourite characters from the Discworld. 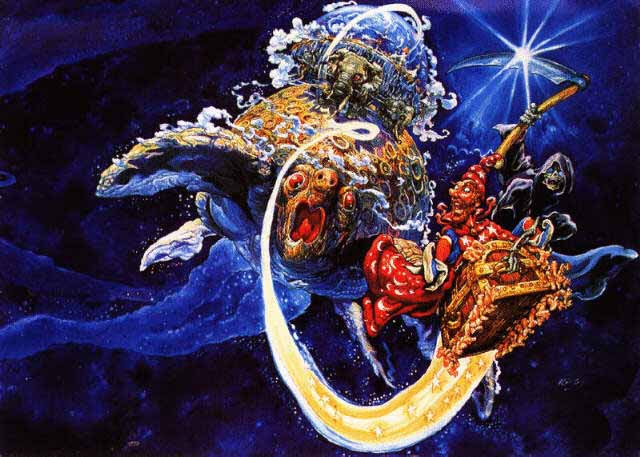 Eric's third wish is to be immortal, which gets them sent right back to the Creation of the universe, so that he can fuly appreciate immortality. In order to escape, Eric has to draw a new magic circle and get himself and Rincewind to Hell/Hades.

A lot of translations of the New Testament transliterate the Greek 'Hades' as it is, but then add a footnote explaining that this means 'Hell', and for years I thought that they were one and the same thing. It's been a very long time since I read Dr Faustus, so perhaps it makes the same conection. In fact, as far as pre-Christian mythology goes, the two are different concepts. The ancient Hades - the Hades of the Odyssey - is just where everybody goes. There are similar elements - some sources include the Isles of the Blessed for the very lucky, and there is usually a bit of Hades, or the underworld, set aside for those suffering eternal torments, like Tantalus and Sisyphus. For the most part, however, the underworld is just the underworld, and is the place where everyone ends up. The Christian Hell, on the other hand, is where you go if you're naughty, and is the place with the fires and the demons and the grinding of teeth. Some of this is in the New Testament as 'Hades', hence the conglomeration of the two, but a lot of it represents medieval developments, such as the demons and Dante's circles.

Pratchett deliberately combines the two into one Hell/Hades (he uses both words) so we get the best - or the worst - of both worlds. It leans more towards the Christian side, though, since everyone is being tortured for all eternity, which is a bit depressing if everyone ends up there. On which subject, the only problem with this is that I did wonder why Lavaeolus and another character from earlier in the story ended up in Hell - did they have guilty consciences? Were they just very pessimistic, so they believed that they were going there? It's nice to see them again anyway - though Lavaeolus is not impressed that they failed to properly warn him about his long journey home.

Hell, at the time at which Rincewind and Eric visit it, is under new management, and physical torture - which didn't bother anyone because they soon realised they had no bodies or nerve endings to feel pain - has been replaced with mental torture. So the Discworld Prometheus has to listen to the eagle tell him about its hernia operation and the Discworld Sisyphus has to listen to all the many, many Health and Safety Regulations concerning pushing large rocks up hills before he can do anything. It's very funny and way too familiar in the same way as Rob Grant's novel Incompetence (which is very good, by the way). By the end of the book, however, the management has changed again and it seems that everything will soon return to normal.

I quite like Eric, but I only have the text-only version, so I'm probably missing something without the illustrations. To be honest, it would never be one of my favourites anyway, as I find it hard to warm to Rincewind. I appreciate his desire to stay alive, but a character whose chief characteristic is running away just does

n't quite interest me as much as many of the other Discworld characters. Eric is good fun though, and plays on real world mythology and literature even more than most Discworld books, which is a good thing - it's almost like reading Roald Dahl's Revolting Rhymes, but for myths.
Books Discworld Mythology Sci-Fi and Fantasy Trojan War