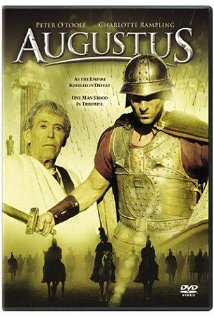 I'll be away at a conference for the rest of this week, at which Penelope Goodman is speaking on this 2-part 2003 made-for-TV movie about the life of Augustus, and the DVD was cheap, so I thought I'd watch it.

There's no way to beat about the bush here: it's not good. The writing is bad, the music is bad, the costumes are bad, the CGI and matte paintings are bad, the ADR which presumably replaces several actors' Italian accents with roughly English ones is especially bad and even the acting is bad, which is surprising, as Peter O'Toole, playing Augustus, is usually excellent. The Lion in Winter, this ain't. It's not even up to Troy's level.

I'm not even going to start on the historical inaccuracies here. Let's just say this re-imagines Caesar and Augustus as great defenders of the people fighting vaguely referenced 'nobles' and leave it at that. I do feel the need to point out that Augustus was not of excessively 'humble birth', as he was part of one of the most ancient families in Rome through his mother. And Cicero is lumped in with 'the nobles' despite the fact one of his defining features is that he wasn't noble. And Cicero appears to be part of the conspiracy against Caesar, which he equally famously wasn't. And... OK, I'll stop now.

The open hostility between Livia and Augustus is very odd. Livia's characterisation is quite interesting and she is much less the cut-and-dried villainess than usual - indeed, it is implied she may be largely innocent. She certainly comes under suspicion of poisoning people though, and without Robert Graves' conceit, that Augustus simply had a gigantic blind spot where Livia was concerned, or Rome's interpretation, that they're both evil incarnate but bound by mutual desire, their relationship makes no sense. Augustus was descended from the Julians twice over (biologically through his mother and by adoption through Caesar) so although Livia was usefully aristocratic, he didn't need to be married to her for that reason. They had no children together and divorce was common amongst the Roman aristocracy, especially in pursuit of an heir, so if they were that hostile to each other, they wouldn't have stayed married.

The almost entirely terrible dialogue did include the odd gem, such as:
Julia: Did you want me to spin the wool for my own dresses like I did when I was a little girl?
Augustus: Perhaps with slightly more wool.
And Augustus carefully avoids a split infinitive, as one is compelled to when speaking Latin, when he announces his intention 'formally to denounce' Julia. O'Toole is no BLESSED in the shouting department though, not any more.

Cleopatra's death scene, which could rival vampire shows for linking sex and death and features what looks more like a cobra than anything else to me, is also better left with the less said the better.

Part 2 is a slight improvement on Part 1, as the sub-plots concerning Julia's unhappy political marriage to Tiberius and the possibility that Livia is poisoning everybody kick in, plus a bit of Antony and Cleopatra, always at least mildly entertaining. It also features a rather fun scene involving Augustus smashing lots of glasses and saving a slave from a flogging, which I have a vague notion may have some roots in an actual historical incident when Augustus ordered a friend not to kill a slave who'd broken something, though I can't remember the details. An assassination attempt on Augustus features the two most incompetent would-be assassins in history but does have the advantage of providing a thoroughly satisfying explanation for Julia's banishment and Augustus' adoption of Tiberius.

On the other hand, Part 2 contains the most bizarre scene of all in which, after nearly 100 years of civil war, a (really rather small) bunch of Roman soldiers suddenly twig that civil war means offing your friends and relatives and refuse to do it. What did they think they'd all been doing for the previous several decades?

Oh, and there's a random bit of sneaky Christianising at the end as well - 'if the gods have sent someone to save the world, I am not that man' says Augustus, and then the film finishes with a reminder that Jesus was born during the reign of Augustus. All this achieves is to make it really seem like we've slipped back in time to the 1960s, when this sort of thing was quite common in Roman dramas. It certainly doesn't belong in a drama about a man who died when Jesus was 14(ish). 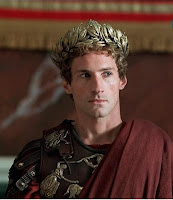 Overall though, this is notable largely for being the most postive and friendly account of the life of Augustus since he wrote his own autobiography. He did it all for Rome, it's all Mark Antony's/Cleopatra's/Livia's/Tiberius's fault, Augustus just wants peace and love and fluffy bunnies. Really, truly, honestly guv. And if you'll believe that, you'll believe anything.
Roman history TV